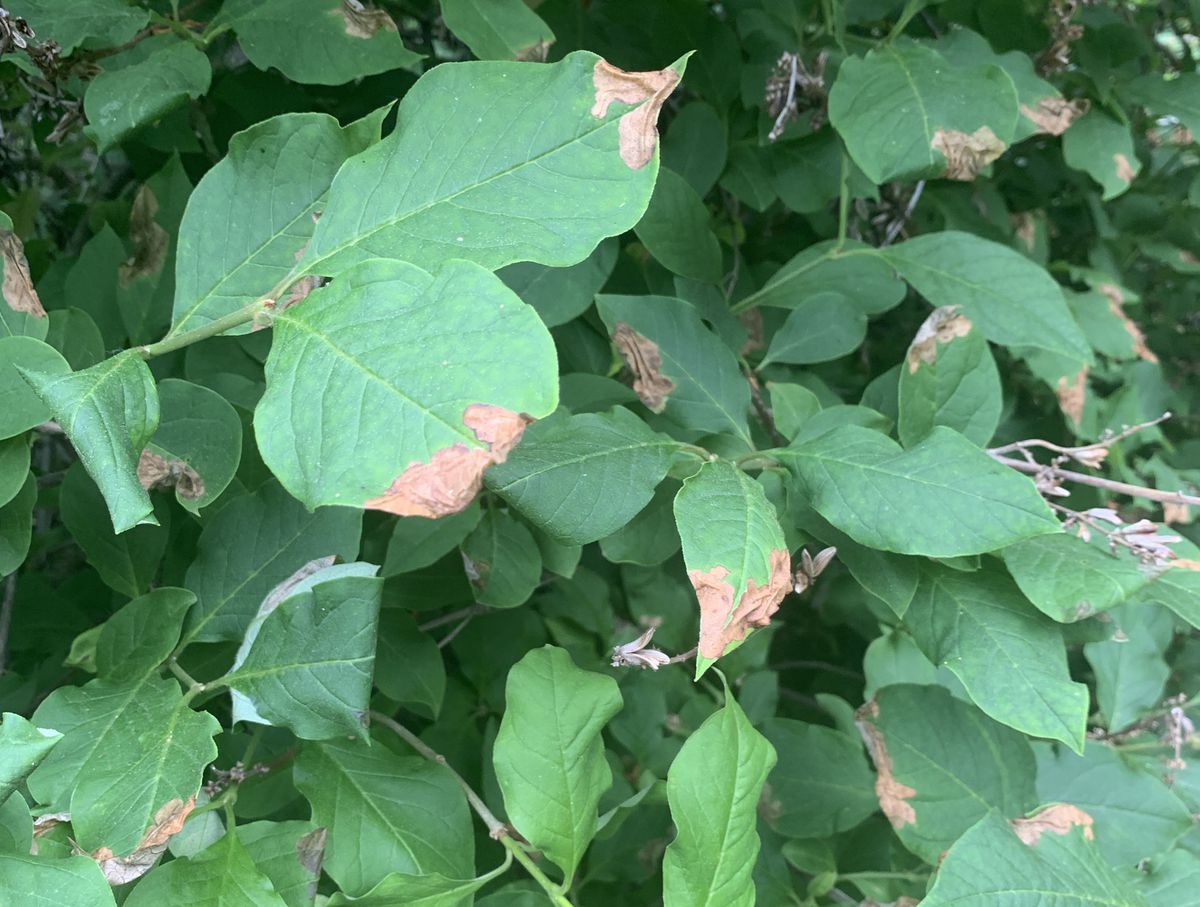 Many lilac bushes in Southcentral Alaska are showing brown spots on their leaves this year. (Photo by Jeff Lowenfels)

Many lilac bushes in Southcentral Alaska are showing brown spots on their leaves this year. (Photo by Jeff Lowenfels)

I should have realized something was happening around here when my friends Larry and Sandra sent a picture of a lilac bush covered with leaves, each of which had developed a brown blotch. Then these translucent brown spots appeared on lilacs all over.

The emails are pouring in like I rarely see them do. The common lilac is the most susceptible to the problem, while the more exotic ones like “Miss Kim” so far don’t seem to be as susceptible. I guess everyone with a yard here in Southcentral, at least, has at least one common lilac.

Ah, but just what is the cause? My first inclination was to go with some sort of bacterial blight because that is what popped up first and the most often during internet research on "brown spots/lilacs.” The descriptions start out sounding like Larry and Sandra’s leaves, but then those leaves turn black and stems start to do the same thing due to rot that follows the browning leaves. Whatever has hit our plants, neither leaves nor stems are turning black, so it must be something else.

Digging deeper into the weeds, I found a few articles on lilac leaf spot. Given the number of spots on our poor plants, the name sure seemed right!

I was all set to go with a bacterial leaf spot disease when I picked a few leaves and noticed I could pull the top layer off the spots. Some had what looked like caterpillar poop to the experienced eye, and some displayed round circular patterns. And some of the leaves — not many, but enough that it wasn’t a fluke — were rolled.

Rolled leaves? Leaf miners? It explains some of the leaves displaying a pattern, but I didn’t see any at first. Ah, but a look at some plants elsewhere in town that had not progressed as much revealed itty bitty, live caterpillars, and they were mining away.

So, here is my diagnosis: Those spots are caused by Caloptilia syringella, a small moth that starts out life as a tiny, 0.25-inch-long caterpillar. Several will work together and mine the tissue between leaf covers, then use their silk thread to roll up leaves, continue eating and finally pupate over the winter.

Normally, a few will hit some area plants, but this year we are experiencing a lilac leaf roller plague of biblical dimensions. If you do not know what I am referring to, go look at any common lilac in your yard and you will.

So what do we do? Some experts advise picking off leaves that display the characteristic blotches, but they obviously have not seen anything like we are experiencing.

Others say raking any leaves up in the fall to get rid of pupating Caloptilia syringella is the way to control their populations. Others contend that natural parasites keep populations in check (usually!) and if you rake up all the leaves then these, too, are removed from the area.

Had we known they were about, we might have sprayed all our lilacs with Bt. But that might have resulted in lessening its impact on area caterpillars as they evolve, and Bt is probably better used to save our delphiniums from defoliators. Neem oil works, but also kills beneficials, not to mention those parasites. And, of course, there are so many lilacs to spray!

Me, personally? I am not going to bother to pick all the leaves impacted as some authorities suggest. I am not going to collect leaves this fall either. I am going to run my lawn mulching mower under our plants and hope that takes care of them.

And I am going to hope that we don’t have such a wet April and May, so that the little buggers won’t rise again to such epic numbers.