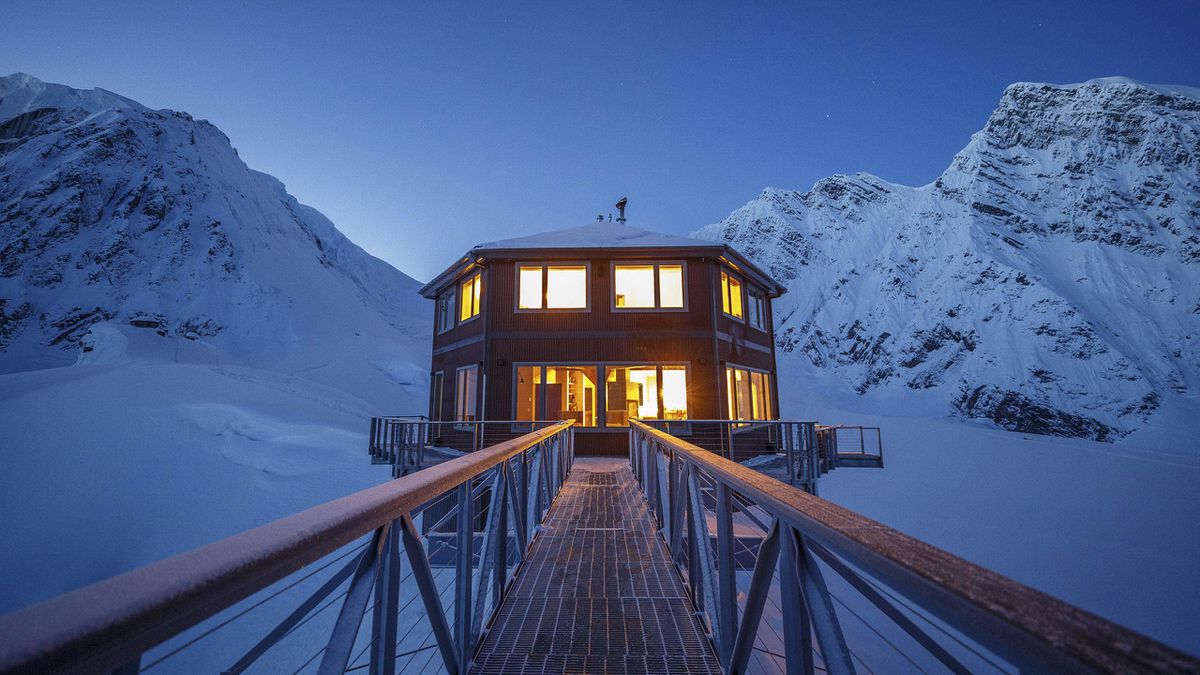 Laying the foundation for Sheldon Chalet took two years because of the extreme environs in Alaska’s in Denali National Park. (MUST CREDIT: Sheldon Chalet)

Laying the foundation for Sheldon Chalet took two years because of the extreme environs in Alaska’s in Denali National Park. (MUST CREDIT: Sheldon Chalet)

One of the most luxurious lodges in Alaska, and one of the most remote anywhere, has just opened on a rocky glacier outcropping, or nunatak, smack in the middle of Denali National Park. From its wraparound windows, the resort's guests-a maximum of 10 at any given time-can watch the aurora borealis dance around the sky or survey an endless horizon of jagged peaks blanketed in untouched snow. The only thing between them and the nearest summit is a sheer vertical rock wall that's twice the height of Dubai's Burj Khalifa skyscraper.

It took more than a decade to secure the final permits to build Sheldon Chalet. Construction took three additional years. In the time it takes to get there from Los Angeles, you could almost fly to Tokyo: Arrival includes a six-hour flight to Anchorage, a two-hour drive to the tiny but charming town of Talkeetna, and an hour-long helicopter ride to Don Sheldon Amphitheater, a 35-square-mile valley carved by glacial ice in the shadow of North America's tallest mountain.

All that is a drop in the bucket compared to the 50 years of family history that make Sheldon Chalet so special for Alaska.

Robert Sheldon, who built Sheldon Chalet with the help of his wife, Marne, and sister Kate, lost his father, Don-a trailblazing Alaskan pilot-when he was just 4: "I only have a couple of memories with my father, and the earliest one was taking off from the village strip in Talkeetna on a very small airplane, zooming through the puffy white clouds."

Bob Reeve, Robert's maternal grandfather, was also a pilot; like Don Sheldon, he made his name as an Alaskan pioneer.

[A pilot's love for the mountains built a house on Denali. Now it's at the center of a family dispute.]

Reeve landed in Valdez in 1932, 27 years before Alaska was declared the 49th U.S. state. He used his experience charting routes for Pan Am throughout South America to create Reeve Aleutian Airlines, a leading-edge Alaska carrier that connected tiny towns across the territory with their counterparts across the Bering Sea. He also built a series of remote mountain huts-some of the state's first tourism infrastructure.

Don Sheldon, meanwhile, came from a farming family in Ohio, but his son says he "wanted to go for the easier life of hunting and trapping in Alaska." As the story goes, "He very quickly learned that, in Alaska, you could fly an hour or walk a week." He'd eventually survey the region with photographer and cartographer Brad Washburn, a contemporary of Ansel Adams. This meant identifying places where planes could land amid the jagged peaks, building landing strips, and even developing specialized aircraft for the job.

"All the flying that happens around Denali National Park today can be traced back to his efforts," Marne Sheldon said. "It's what has allowed for present-day tourism in Alaska."

When Don Sheldon died in 1975, the governments of Alaska and the United States considered naming a mountain in the Alaska Range for him. It wasn't enough, they decided, opting instead to designate a 35-square-mile amphitheater filled with dozens of peaks.

The primary landing strip in Denali National Park-built by the elder Sheldon to facilitate explorations with Washburn-is a half-mile from Sheldon Chalet. "That's the provenance of the interest in this area," explained Marne Sheldon, who ran point on logistics as the hotel took shape. Everything from the drawer pulls to the heating system had to be flown to that landing strip by helicopter or fixed-wing plane, and the family is among the lucky few who have special dispensation to fly there, thanks to their long history in the area.

That history also explains how Sheldons earned commercial rights in such a protected place. Back in the 1950s, well before Denali was a national park, the family scooped up five acres of land under the Homestead Act; it included the glacial outcropping that would be called Sheldon Nunatak. Their final land permit, though, got caught in the cross hairs of the state's ratification-it took until 1971, the year Robert was born, to come through.

Don Sheldon and his wife, Roberta, started small, with a basic operation for passionate mountaineers and explorers. Don had bigger plans but died before he could execute them. Everything the younger Sheldons knew of their parents' onetime aspirations came from a National Geographic television clip from the '70s in which he referenced a broader vision for tourism on the nunatak, as well as a prototype travel brochure for "Mountain House #1."

Roberta Sheldon never spoke again of the dreams she had shared with her husband; instead, she poured her affection into preserving the small-town charm of her adopted home, Talkeetna, roughly one hour outside Denali.

"We were sorting through a warehouse full of stuff in Talkeetna after Roberta died in 2014," Marne Sheldon recalled, "when I came across an odd roll of paper." Inside were decades-old blueprints for a hexagonal structure on Sheldon Nunatak: Mountain House #1.

Sheldon Glacier is an upgraded vision of that decades-old vision. Guests arrive via helicopter-a ride that takes them zooming through narrow slots in the surrounding canyons-and are greeted with Champagne and Alaska seafood hors d'oeuvres. "It's extravaganza upon arrival," Marne Sheldon said. "One of my favorite things is seeing people's faces when they land-their brains can't quite comprehend what their eyes are seeing. They need a few breaths to take it all in."

Inside is a living room called the Commons, anchored by a special Finnish fireplace that doubles as a high-efficiency, clean-combustion heating system. A family-style dining space is built around a beautiful birchwood table handcrafted in Talkeetna. The rooms are sparsely designed, with faux fur throws and panoramic views, to keep guests' focus squarely on the beauty outdoors. The Sheldons want the property to be carbon-neutral and believe they're close to accomplishing this, thanks to generous solar panels and a runoff-powered water supply.

"It's simple but elegant," Marne Sheldon said. "Pretty much everything was challenging" when it came to building the state's first luxury highland lodge. Guests are encouraged (but not required) to travel to Sheldon Chalet in groups or via buyouts, as three bathrooms must serve five bedrooms-a concession that several high-end hotels in Alaska have made because of the difficulty of building larger structures in such extreme environs. "The simple things in life, like running water, are actually quite luxurious when you're 6,000 feet up on a glacier," she said.

During aurora season, mid-September through early March, days are spent "flightseeing" around the national park, snowshoeing, ski touring, and visiting remote hot springs. (You can also build an igloo.) During "Adventure Season," from early March through mid-July, additional thrills include rappelling, glacier trekking, visiting a mastodon boneyard and fishing.

Evenings can include warm-ups in the rooftop sauna, stargazing sessions and elegant meals by Alaskan chef Dave Thorne, who used to cook for Justin Timberlake, Keith Urban, and Kings of Leon when they were on tour. Dishes such as barbecued Alaskan oysters with roasted poblano and pepita chutney are more often paired with Anchorage Brewing Co. beers than with big California reds.

"My mom and dad were people worth remembering, but their desire for this property had nothing to do with their own legacy. They just wanted other people to experience this place that's majestic beyond anything else on the planet," Robert Sheldon said.

He's also in it for the big picture. "Alaska has been in a recession for four years, but tourism is a bright spot," he said. "Hopefully, this shows that we can still do great things for the state of Alaska."

– Nightly rates from $2,300 per person include accommodations, food and beverages, and helicopter transfers.