With fewer foxes and rats, Aleutians reclaim status as a birding paradise 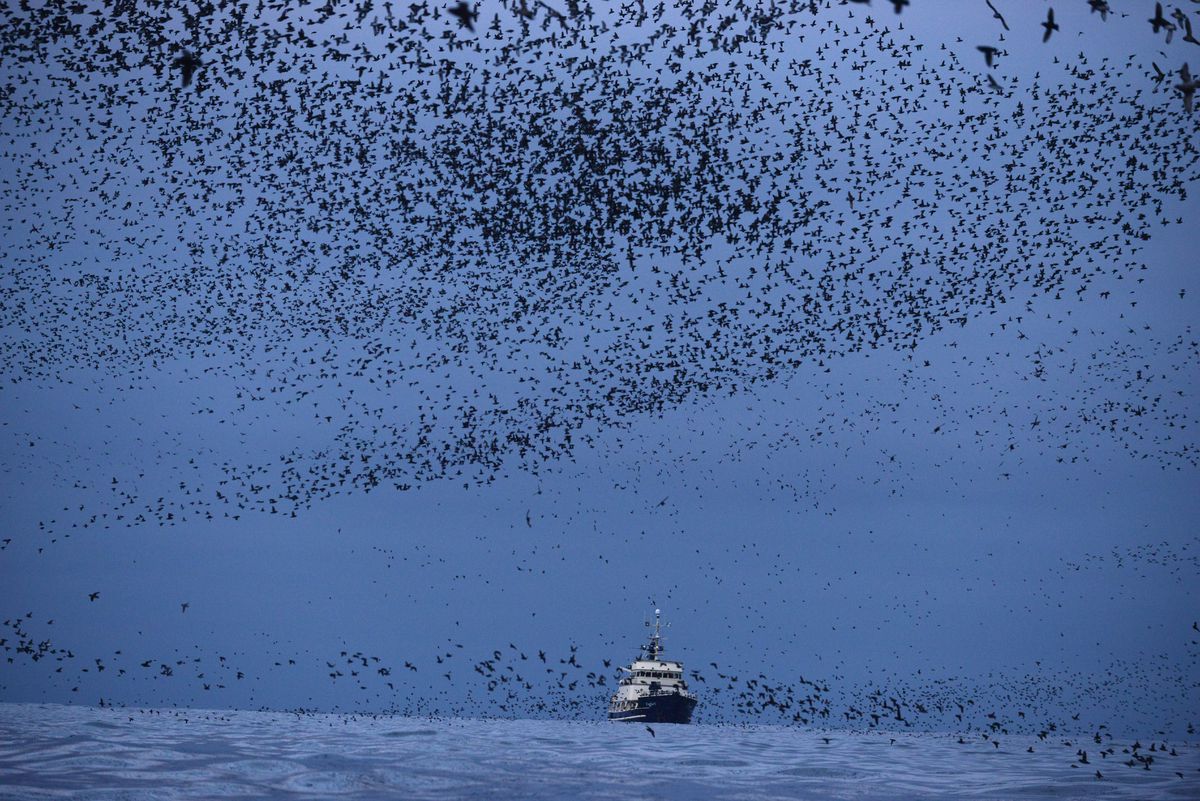 The U.S. Fish and Wildlife Service research boat Tiglax stops at Kiska Island to look at a colony of least auklets and crested auklets in the Aleutian Islands on June 5, 2015. The colony contains millions of auklets. (Bob Hallinen / Alaska Dispatch News)

The U.S. Fish and Wildlife Service research boat Tiglax stops at Kiska Island to look at a colony of least auklets and crested auklets in the Aleutian Islands on June 5, 2015. The colony contains millions of auklets. (Bob Hallinen / Alaska Dispatch News)

With as many as 200 volcanic islands — the exact number depends on how one defines an "island" — and numerous rocky islets, the Aleutian Chain drapes like a necklace across the North Pacific, stretching from Alaska's mainland nearly all the way to Siberia. The islands extend so far west that the international date line makes a big loop to keep Alaska from sprawling across today and tomorrow at the same time.

[Aleutian seabirds are showing the effects of a changing marine ecosystem]

A century has passed since President William Taft, on his last day in office, signed an executive order creating the refuge "for the protection of indigenous birds, the propagation of reindeer and fur-bearing animals, and the development of fisheries." Although President Teddy Roosevelt deserves credit for establishing the nation's first wildlife refuges, none were as large as the 2.7-million-acre reserve created by his successor.

One important furbearer, the sea otter, formerly abundant in the Aleutians, was nearly extinct at the time, a victim of overhunting. The new refuge's "fur-bearing animals" were primarily arctic and red foxes. Although little understood at the time, farming foxes and conserving seabirds were incompatible objectives because the non-native foxes were capable of eating most nesting seabirds or their eggs. Reindeer and caribou released on some islands also conflicted with the native birds.

There is no doubt the Aleutian Islands provide critical seabird habitat, then and now. Some 10 million seabirds inhabit the islands and surrounding sea. Two hundred seventy-one species of birds have been documented in the Aleutians, but seabirds, represented by 26 species, are the most numerous inhabitants.

The most common seabirds include storm petrels, auklets, puffins and murres, each group represented by several species. These birds nest on cliffs and in earthen burrows and rocky crevices.

By all accounts the Aleutians supported many more birds until foxes, released on over 140 islands by fur farmers, decimated avian populations for two centuries.

Fur was a valuable commodity when the islands became a wildlife refuge. Refuge managers accommodated fox farmers, many of them local Aleuts, to ease opposition by Alaskans. Foxes were considered an economic substitute for the disappearing sea otters. The voracious foxes, with little to eat besides the ground- and cliff-nesting birds and their eggs, completely eradicated some species.

Norway rats, introduced accidentally, also decimated seabird colonies. Rats were even more rapacious than foxes, capable of clambering across cliffs and crawling into crevices to kill and eat seabirds and their eggs.

The U.S. Fish and Wildlife Service has attempted to eliminate these introduced species from the islands with a great deal of success, though the programs can be expensive. By 2008 more than 40 islands were fox-free. Eradicating foxes alone has likely increased populations of 15 to 20 bird species by more than 200,000 individuals, and the numbers are still increasing.

By far the biggest success story has been the resurgence of Aleutian cackling geese, formerly known as Aleutian Canada geese. These diminutive geese, about the size of a mallard, were thought to be extinct, victims of the alien foxes and rats. However, in 1962 refuge manager Robert "Sea Otter" Jones found a remnant population on Buldir Island, a 5-mile rocky outcrop in the western Aleutians 300 miles west of Adak. He counted only 60 adults and seven goslings. The species was listed as endangered in 1967.

After eliminating foxes on several islands — and shutting down the hunting season for the geese on their wintering grounds in Oregon and Washington — Fish and Wildlife began reintroducing Aleutian cackling geese to these islands, and the overall population has rebounded. The species was scratched off the endangered list in 2001, one of few formerly endangered species to achieve that goal. Recent counts have tallied as many as 190,000 Aleutian cackling geese, so many that farmers in Oregon and Washington are complaining about crop depredations.

Other Aleutian birds aren't doing as well. Populations of several species found primarily in the Aleutians and nearby islands — such as red-faced cormorants — are in decline, some dramatically, most likely due to climate-related changes in food availability.

Remote and precipitous, most of the Aleutian Islands are for all practical purposes inaccessible to wildlife enthusiasts. Several decades ago, however, birdwatchers discovered a birding paradise on Attu, one of the largest islands in the chain. Attu is so far west it's in the eastern hemisphere. The remote island's other chief advantage to birders is its airfield.

Because Attu is much closer to Asia than North America it's a compelling landfall for Asian birds blown off course during migration. Birds seen nowhere else in North America visit Attu every year, allowing dedicated birders to pad their North American "life list." Birders — who like to be on the island at the tail end of a massive storm — are thrilled by sightings of shorebirds and even songbirds seldom, if ever, spotted before in North America.

In the book "Attu: Birding on the Edge," Anchorage birder Thede Tobish, observed that "in this past century alone, some 83 species have been added to the North American list from Alaska's outposts, mainly from the western Aleutians and the Bering Sea islands." Another contributor, John Fitchen, called Attu Island "the Holy Grail of North American birding."

It's a birding paradox that one may visit an American wildlife refuge, stand immersed in the shrieking cacophony of a million or more seabirds and be overawed by the glimpse of a single Asian songbird.

Rick Sinnott is a former Alaska Department of Fish and Game wildlife biologist. The views expressed here are the writer's own and are not necessarily endorsed by Alaska Dispatch News.