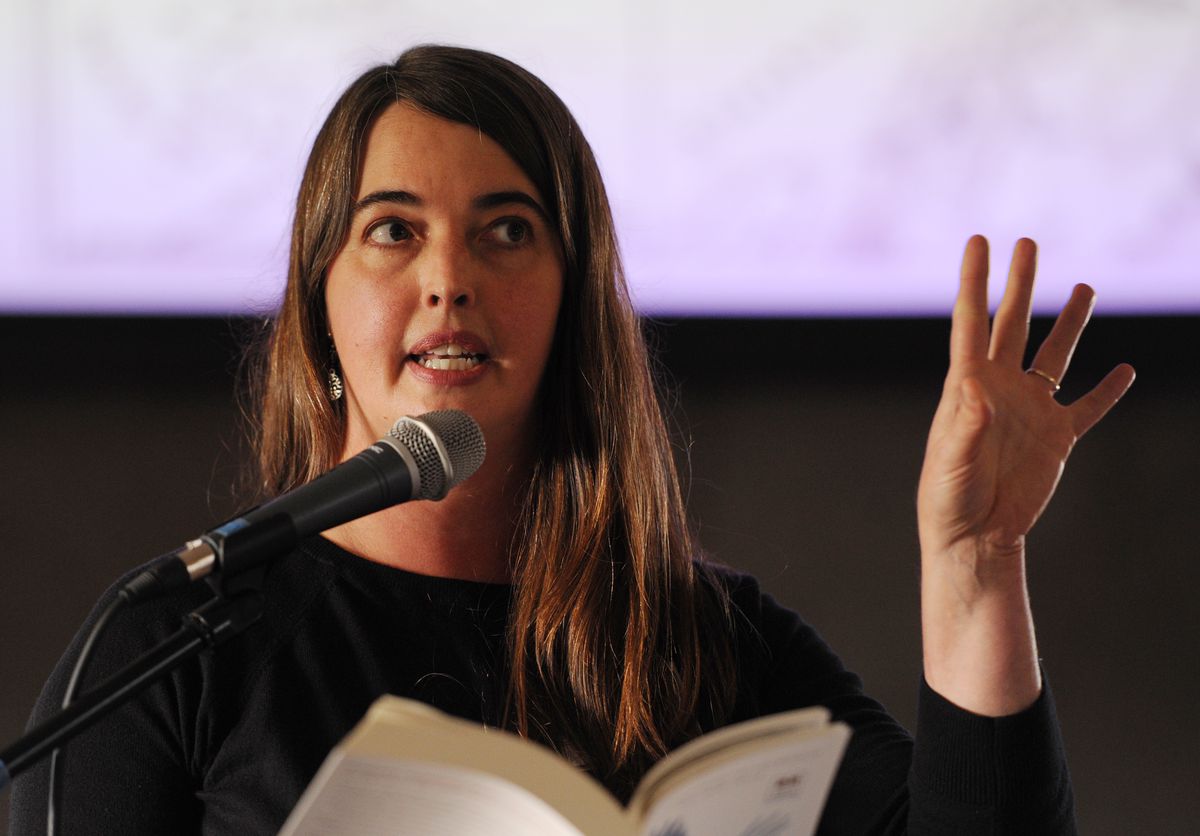 Alaska author Eowyn Ivey reads from her new novel, “To the Bright Edge of the World,” at Fireside Books in Palmer on Tuesday, Aug. 2, 2016. (Bill Roth / Alaska Dispatch News)

Alaska author Eowyn Ivey reads from her new novel, “To the Bright Edge of the World,” at Fireside Books in Palmer on Tuesday, Aug. 2, 2016. (Bill Roth / Alaska Dispatch News)

To The Bright Edge of the World

Alaskan Eowyn Ivey, whose previous novel "The Snow Child" was a Pulitzer Prize finalist, has returned with a stunningly brilliant new work. Beautifully written, fast-paced, wide-ranging, historically-based, and creatively imagined and structured, "To the Bright Edge of the World" takes readers on an adventure into both wild Alaska and the hearts of strong and companionable characters. It delivers in all the ways a great novel should — with plot, characters, language, and mystery converging in a highly original story.

Inspired largely by the real-life 1885 expedition of Lt. Henry T. Allen to ascend the Copper River into Interior Alaska and westward, a 1,500-mile wilderness feat compared at the time to Lewis and Clark's journey across the American West, Ivey has gone beyond the usual concept of historical fiction to create something both recognizably true and magical. Her fictional Wolverine River and the lands beyond it, with their splendor and physical challenges, are vividly captured. And then, drawing upon Alaska Native stories recorded by locals and anthropologists in the region, Ivey has enlarged the experience with supernatural — and yet still believable — elements. The raven may be more than a raven, a woman may have been married to an otter-man, and a monster may yet live in the depths of that lake.

The weaving of multiple storylines, voices and cataloged items lifts "To the Bright Edge of the World" into its own creative category. First we encounter a present-day correspondence between a descendant of Col. Allen Forrester, the expedition leader, and a museum curator in the small town of Alpine, Alaska. That introduces us to Forrester's journal, entries from which make up much of the narrative. A second major braid takes the form of a diary and letters from Forrester's wife, Sophie, who stays behind at a barracks in Washington state. The notebook of one of Forrester's men, a war-damaged man with a poetic soul, is layered in, as are clips from fictional news stories, advertisements, documents, museum labels and photos.

This fragmented, scrapbook-style structure could so easily have been an annoyance, interrupting a main narrative and causing a reader to skip over pages. The use here is perfectly executed, with every element too fascinating to miss and the timing carefully controlled. Conflicts and mysteries arise, submerge, and advance or conclude exactly when needed. Back stories are revealed. The result is an integral whole of many parts. There may not be a better example, anywhere, of a novel so successfully constructed in this fashion.

And the voices! Ivey has established distinct, utterly "real" voices for each of her characters. The historical ones employ exactly the language and syntax expected from their Victorian age, and the contemporary pair of correspondents — one elderly and one young — likewise sound like people we would know today. All of the characters are complex and tremendously likable, despite their occasional human failings. They are characters to love and admire, to think about long after the book has closed.

On one level, "To the Bright Edge of the World", is a compelling love story. The main characters, Allen and Sophie, are newlyweds joined by adventurous spirits, curiosity about the larger world and a certain rebelliousness against the norms of their era. Separated for more than half a year, they use their journals to speak to one another of their trials, attachments and hopes for the future.

Sophie is a particularly engaging character, with a passion for birds and photography. A feminist before her time, she insists on living a full life in her husband's absence. As a literary creation, she brings into focus the mostly hidden lives of women in her time.

But beyond the obvious themes of exploration and a couple's abiding love, there's something more here, suggested by the book's title. This is a novel about vision, seeing, opening to the world's mysteries, beauties and human possibilities. Sophie captures this on a micro scale with her photographer's eye; examining a photo of a small bird, she writes, "When I look upon it, this bend of bone and feather and sunlight, a tender place in my heart is healed even as it is torn, again and again a thousand times over." Her husband, in the "grand, inscrutable wildness," comes to accept possibilities he could not, as a rational person, ever have entertained. "I can find no means to account for all that we have witnessed, except to say that I am no longer certain of the boundaries between man & beast, of the living & the dead." The museum curator, of Native heritage, also comes to see in a fresh way the history of his people and the legacy of all that came with American and European contact.

Often — perhaps usually — an author whose first book is a great success is never able to again match the achievement. In Eowyn Ivey's case, we can safely say that she has outdone herself. This mature, very accomplished and immensely satisfying new work deserves every accolade it will surely receive. It ranks as an American masterpiece.

Nancy Lord is a Homer-based writer and former Alaska writer laureate. Her books include "Fishcamp," "Beluga Days," and "Early Warming."