My eyes smile again: A caribou hunt up the Kobuk River 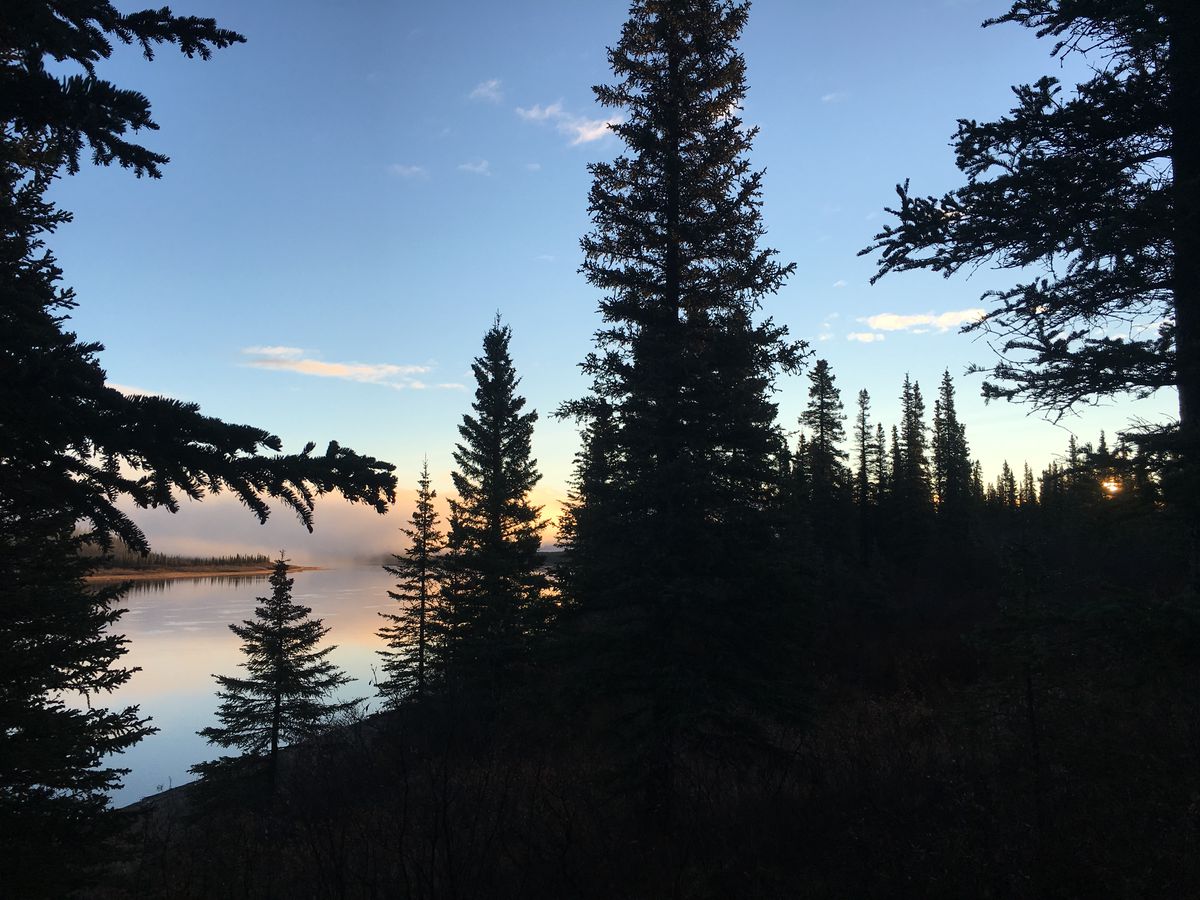 The sun rises on the Kobuk River. (Laureli Ivanoff)

The sun rises on the Kobuk River. (Laureli Ivanoff)

NALUQ — There's something about being out in the country 10 miles up the Kobuk from Kiana. In the open air. Having the freedom of a river. Feeling the grounding of black spruce trees. Hearing the lightness in heart from friends' laughter. And eating a breakfast prepared on a Coleman stove in a warm cabin. Feeling enveloped by the cabin in a place called Naluq.

There's something about walking up a hill covered in ayuu with its tundra smell, ready to pick for tea. And getting to the top and seeing caribou walk toward you. There's something about glassing them through the binoculars and seeing their awareness. Of sounds. Of each other. Of smells. Seeing their strong urge to keep moving, moving, moving. To make it south before the snow sticks.

There's something about standing with two strong women, waiting to see where the herd of 13 will move. Hearing a boat upriver. And then another downriver and seeing the animals' sudden flight response. Running. Seeing and hearing shots from two of three brothers. And seeing one bull fall to the soft tundra.

Seeing the eldest brother run to take care of the animal, even in death. Being so thankful for the meat and marrow. Knowing the women I stand with feel the same gratefulness and love for a land and place and life. Feeling it in my gut and constantly giving thanks.

And then hearing the eldest brother frustratingly talk about the boats that caused the animals to run away. Farther. Farther. "We could have had that other bull," he said. A man. Always the need to give more. Provide the best. Feeling his love and care for family and friends in his words. To give.

"Aadigaa. We have one caribou," was the response. With feeling. With gratitude. You give so much. Thank you.

It's cozy perfection waking up in the Schuerch family A-frame cabin to the sound of coffee percolating. Smelling it and feeling the warmth of the freshly lit fire in the wood stove. Seeing snow on the ground as my sleepy eyes look out the window. Fresh. Clean. New.

There's joy in getting the radio situated just right. By the window. Antenna pointing west and hearing gospel on KOTZ on a Sunday morning. Hearing the smile in the baby brother's voice as he sings along, "And I knowwwww, yes I knowwww …"

And more joy in the freedom of being among women who embrace their femininity, even out in the country. "After applying her lipstick and blush," Greta said, "my grandma used to say, 'You never know who might stop by.' " Andrea and I nodded yes, agreeing that just because we're the camping types, it doesn't mean we must ignore our womanhood.

And there's pure delight in sharing what Andrea said in her sleep. "It was so hot in the loft. You sat up and said some things in Yupik. Then you grumpily said, 'Alaqaa!' and laid back down." And then more delight saying "Alaqaa" whenever something funny, weird or annoying happened during the rest of the trip up the Kobuk River.

And hope. In finishing a lazy sourdough biscuit breakfast and hearing excitement in the baby brother's voice. Feeling each one of us move toward the window to see the herd of 40 on the other side, heading down the hill straight toward the river. Sensing the sudden bustle in the cabin as clothes get layered on and guns are grabbed and boots cover our feet.

Three more caribou were gutted that morning. Kaatchiaqs, the caribou skins, were saved. New friends traveling downriver parked their boats. A lunch of maktak, smoked salmon strips, akutuq (Inupiaq version of fat, sugar and berries), akuutaq (Yupik version of fat, sugar and berries) and pilot bread was shared. Hot coffee again percolated on the Coleman stove — this time on the beach. In the cold, open air. Hearing stories of wolves, Onion Portage, a moose falling before hearing the shot.

Everyone smiling. My soul smiling. Feeling my eyes smile again standing by that river.

Laureli Ivanoff lives in Unalakleet where she's raising her two children, Joe and Sidney. They eat a lot of fish and are very proud of their Yorkiepoo named Pushkin.

Laureli Ivanoff is a writer who lives in Unalakleet, where she's raising her two children, Joe and Sidney. They eat a lot of fish and are very proud of their Yorkiepoo named Pushkin. She is former news director of KNOM radio in Nome.