Battling a blitzkrieg of bugs 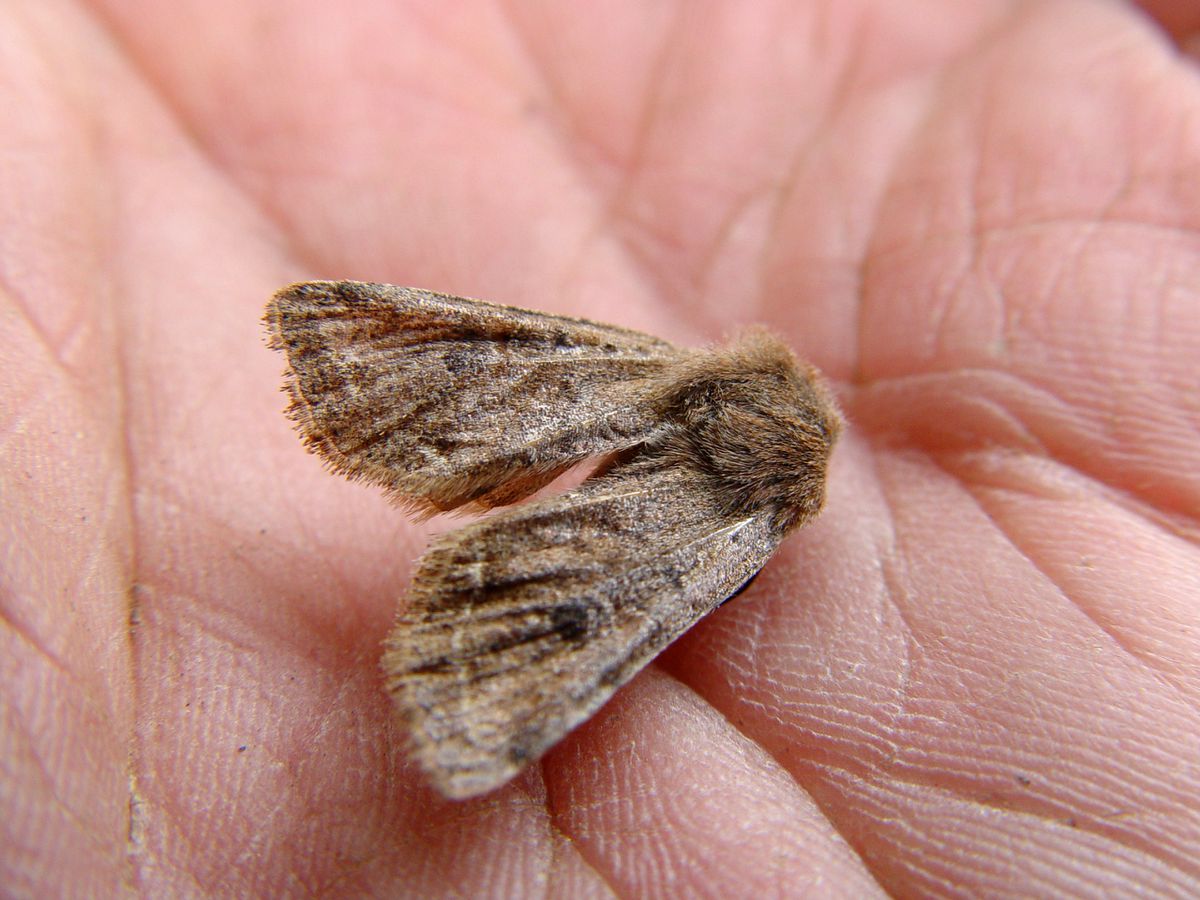 The moth species affecting the Lake Clark area for the past three seasons is likely a member of the family Noctuidae. There are almost 3,000 members of this family in North America. (Steve Kahn)

The moth species affecting the Lake Clark area for the past three seasons is likely a member of the family Noctuidae. There are almost 3,000 members of this family in North America. (Steve Kahn)

LAKE CLARK — Three years ago in late March, Anne and I cut down several birch trees near our greenhouse. The following morning we were amazed to see the sap-wetted stumps covered with moths — so thick it almost looked like a brown-gray cloth was covering the fresh cuts.

At the time, we marveled at the vibrant sign of spring awakening, not realizing what was to come.

By June, Anne discovered small holes in the leaves of our strawberry plants. Though our garden veggies grew protected under cold frames, we noticed that the blossoms on the strawberries, as well as on indigenous currants, wild rose, and highbush cranberries were disappearing.

One day there were robust blossoms; a few days later they were gone, consumed with swift intensity. And the leaves of birch and willows became riddled with holes. Green-striped caterpillars grew rapidly and were soon turning the leaves of rhubarb to skeletons and devastating raspberry bushes. They slammed the mountain ash bushes hard.

When the temperature rose we removed the cold frames from our garden boxes, and though the caterpillars weren't munching on our chard and kale, we did have to hand pick them off our broccoli and cauliflower. I collected hundreds of caterpillars weekly from our tiny patches of rhubarb and raspberries and fed them to our local grayling. I found that it was best to walk the trails with someone taller ahead of me if I didn't want a sprinkling of caterpillars on my head and shoulders.

It was suggested to Anne and me that infestations of this sort commonly last two years. While bracing ourselves for a second coming, we secretly hoped this would be a one-year event. We weren't so lucky.

A warm winter came and went, and it was no surprise when the moths returned in spring — in full force. Anne would kneel down to inspect the strawberry plants and in defeat say, "There's a caterpillar on almost every blossom." In year one, our front yard seemed to be ground zero of the infestation, but the second year our neighbors up and down the lake reported similar numbers of moths and caterpillars.

We'd clean up plants by hand and new recruits would parasail (or bungee jump, or whatever caterpillars do) in, lowering themselves down on a strand of silk from the canopy of birch trees. Anne frantically researched natural and even insecticidal remedies, because hand picking was a losing battle. Not the kind of job security either of us found satisfying. I was ready to accept defeat and wait them out, but Anne wanted to fight back. She ordered a natural microbial pesticide in powder form to dust some of the plants. It was somewhat effective, but labor intensive, because it had to be applied in such a way as to reach the underside of the leaves and reapplied after rain. For the second autumn in a row, native plants along our shoreline didn't produce any currants, highbush cranberries or rose hips.

With another winter of record-high temperatures, enough to keep the lake from freezing, we didn't have much hope that things would be different for the growing season. We figured at least our favorite garden crops were safe — but the green crawlies began boring holes in the leaves of kale and chard — plants they had previously ignored.

It seemed as if they were adapting to a more inclusive diet, one that was encroaching on our crops more and more. The only change was that it was so warm early in the year that the life stages of the moth (likely a member of the family Noctuidae) were put on a fast track. Their numbers were even greater and more widespread than in previous years. Friends who hiked up the mountain behind our cabin reported that the caterpillars were thick all the way up to the very last alder before timberline.

Living in Alaska our entire lives, neither Anne nor I had experienced nationwide or worldwide infestations. Though my compassion was stirred when I thought of iconic crop devastations like the potato blight that led to the Great Famine in Ireland, the Boll Weevil infestation that swept across southern states, or the 19th-century Great Plains locust plague, I'd never understood that sense of defeat over something small enough to squash between my fingers.

I won't be one of those trying to debunk the theory that crop pests and diseases are moving toward the poles at about the same speed as higher temperatures. For a lot of years, cold winters in Alaska seemed to take care of most problems of this sort, or at least act as a limiting factor — perhaps more than we ever knew.

If the moths return next spring we won't starve. Anne and I have jars of salmon, moose and chard under the cabin, but even on this relatively small scale, concerns about food security can't help but flash more urgently on one's personal radar screen.

Am I wishing for a brutally cold winter? No, I have to admit that extended cold spells far below zero don't have the appeal they once did. But I do miss something that feels more like a normal winter, with ice on the lake and winter warm spells that last days instead of weeks or months.

No doubt I miss plump currants and succulent rose hips ready for the picking along our beach.