Stalking snowy owls -- and the mystery of their wintertime migration 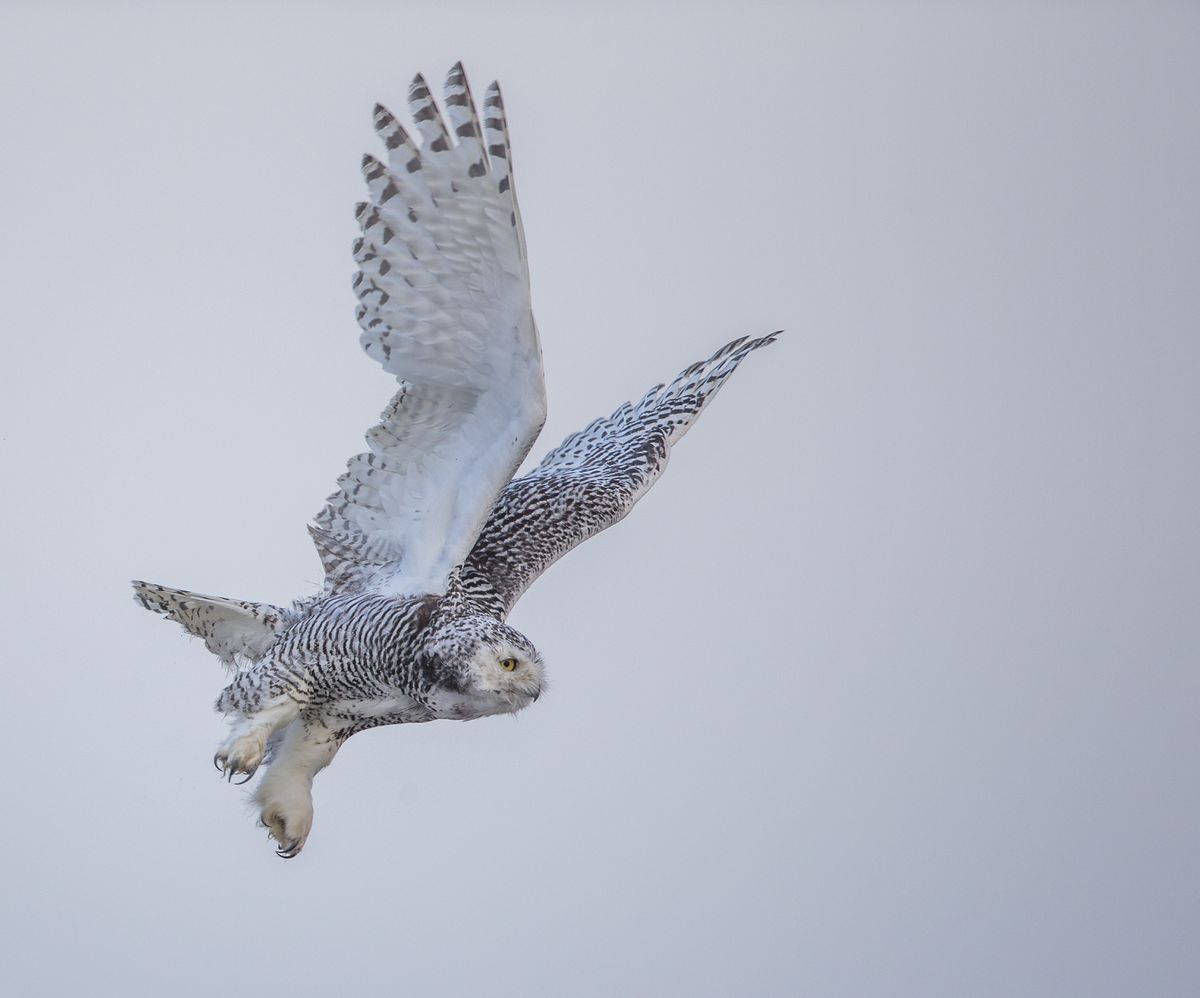 The following is excerpted with permission from the new book, "Owl: A Year in the Lives of North American Owls," by Paul Bannick (Braided River, October 2016). Learn more at www.BraidedRiver.org. Braided River is an imprint of Mountaineers Books.

One November day on Alaska's North Slope, I was photographing snowy owls when the first major snows of winter hit. Overnight, gold tones gave way to blues. Every sound was muffled. The young owls disappeared. During these times, only the hardiest of creatures, including polar bears, arctic foxes, ptarmigan and some adult snowy owls, remain.

While freezing temperatures can hit during any month, the average high is below freezing and falling beginning in October. On Nov. 19, the sun dips below the horizon and remains there for more than two months. By Feb. 21, the average low is minus-21 Fahrenheit.

It takes a hardy, experienced bird with sufficient prey to survive these extremes.

Many snowy owls and all short-eared owls leave the Arctic by November. While short-eared owls move south, the movements of snowy owls are much more complex and poorly understood; they involve a mix of migrations, irruptions, and nomadic behavior that varies by year, population, sex and age. Some remain near breeding sites, especially when lemmings are plentiful, while the wanderings of others may bring them to between Alaska and Russia. Some snowy owls migrate north, often going dozens of miles out to sea, where they prey on seabirds as well as eiders and other sea ducks that feed along openings in the ice. Snowy owls that stay in the Arctic through the winter will also eat ptarmigan, hares and even some carrion killed by other animals.

Many North American snowy owls migrate to the northern Great Plains of southern Canada and the northern United States every year, but other southerly movements are less clearly understood. During some winters, unusually large numbers of snowy owls occur irregularly and unpredictably when they move south of their breeding grounds, often showing up outside places where they normally migrate.

Contrary to popular opinion, which blames this phenomenon on a lack of prey, experts agree that the largest snowy owl irruptions are probably a result of a lemming spike during the prior breeding season that helped the owls raise an unusually large number of young, birds that then fanned out over treeless expanses in the winter.

With many young, more birds fly over the boreal forest and appear in larger numbers just south of the forests on the Great Plains, and around beaches and agricultural areas near the Great Lakes, Northeast and Northwest. This theory is bolstered by the fact that, in such years, most of the irruptive birds are juveniles. Other factors, such as weather patterns, quantity of snow and populations of alternate prey, may play a role as well. Bird banding and satellite data are providing information on individual birds, which should help us better understand these movements over time.

I witnessed my first snowy owl irruption during the winter of 2005–06 in the Pacific Northwest. A smaller "echo" irruption occurred in the Northwest in 2006–07, with yet another and much larger one nationwide in 2011–12 that brought snowy owls to every province in Canada and to 31 of the 50 U.S. states, including Hawaii. The winter of 2013–14 brought an irruption to the Upper Great Lakes and Northeast Coast but very few owls to the West. Apart from those years, not many snowy owls have been found outside their typical areas during winter.

By the time of the irruption in 2011, I had already been to the Arctic several times and had discovered how difficult it is to find snowy owls in their breeding habitat. It struck me that people have a better chance of seeing snowy owls just outside many large northern North American cities during an irruption than they do in the best of tundra habitats in a good year.

When snowy owls first arrive on their wintering grounds in November and December, they move around quite a bit, being seen in new places every few days. By late December, they often find places with a solid prey base, where they will spend the majority of their time over the next several weeks.

Slumber must wait when snowy owls are irrupting. While I was walking one day before sunrise on a beach trail in British Columbia, it was dark enough that I could not see whether I was stepping on ice or dirt, so I walked carefully while my eyes adjusted. Although there was not enough light for good photography, my 600mm lens made serviceable "binoculars" as I strained to make out shapes in the dark over the tidelands. I scanned quickly, not wanting to waste time on anything but owls.

The dozen or so white blobs were obviously gulls, so I skipped them and continued to scan the rest of the beach. On second thought, I decided to bring my lens back to the driftwood where the white blobs were. Instead of gulls, I realized I was focusing in on 19 snowy owls. That serendipitous moment quickly passed, as a low-flying bald eagle dispersed the owls.

When we see snowy owls during the winter in southern Canada and the Lower 48, they are often younger birds. That said, it is nearly impossible for anyone — even an owl expert — to positively discern the age and sex of owls, except older adult males, without having them in hand.

On average, adult snowy owl males are whiter than females, with some males appearing almost completely white, but some young males look much like small females. Younger owls are generally more heavily marked than adults of the same sex but there is tremendous overlap.

Snowy owls winter in places that have much in common with their arctic nesting habitats. They select broad, open landscapes like beaches along oceans, sounds and large lakes, as well as farm fields, wetlands and even airport grounds. These places not only offer plenty of prey but also allow the owls to hunt and roost the same way they do on the tundra. Snowy owls have exceptional vision: They can see prey from a mile away. Although they typically hunt from mounds on the tundra, they also use driftwood, snags or even telephone poles as hunting perches.

Opportunistic hunters come winter, snowy owls target birds and small rodents, including lemmings, voles, rats and mice. They prefer to pursue prey at night but are most active when their primary prey is most easily captured — including in the daytime, if opportunities arise.

Hunting at the beach

During January 2012, I was studying irrupting snowy owls on the Washington coast. It became a ritual for me — arriving at a dark, empty parking lot at 3:30 in the morning and pushing the car door open against the gusts and rain to collect my gear. I trudged through the soft sand at the surf's edge, toward the point where the owls were hunting, leaning into the wind and salt spray in the dark, using the horizon as my guide. As I approached, I walked in the surf, sinking into the wet sand, and watched the horizon for the silhouettes of owls. I tried to figure out which perches they were using before choosing where to stand. Once I select a place, I try to stay put, to learn about and capture photos of the owls' natural behaviors as the sun rises.

One owl watched sanderlings — a small but plump sandpiper — as they flew erratically over the wet beach, now bathed in pink light. The owl showed little interest for 10 minutes or so, until suddenly his head bobbed up and down, left to right, and then froze for a moment before he took off on a chase. I never saw the owl with a sanderling meal, but the three pellets I found near his perch were analyzed by bird expert Dennis Paulson at the University of Puget Sound's Slater Museum and showed evidence of five sanderlings and one horned grebe.

Another morning, being careful not to trip over logs or tumble into the ocean, I followed a snowy owl hunting in the inky-gray twilight. Hearing a sudden splash and a struggle in the distance past some driftwood piles, I headed cautiously and quickly in that direction. After wading in the surf and climbing over some wet driftwood in the dark, I came upon a snowy owl with a white-winged scoter, a 3.5-pound duck with a 34-inch wingspan.

Snowy owls aren't alone in seeking these sought-after wintering spots. They compete with and sometimes hunt short-eared owls. One morning while looking for snowy owls north of Seattle, I crept slowly toward a known roost site, only to be saddened to find two pairs of short-eared owl talons among the owl pellets.

Over the past few winters, I spent some time photographing migrating snowy owls rather than irrupting ones and witnessed slightly different scenarios. Whereas the irrupting snowy owls frequently perched in groups of four or five, particularly during early winter, the migratory owls of the Great Plains were usually alone, and when two were in close proximity, one drove the other off. Also, the best territories were often held by large lightly marked birds, which kept surveillance from atop barns, grain silos or the tallest tree in a windbreak. These prime territories typically featured large, flat wheat fields bordered on at least two sides by irrigation ditches.

The relative abundance of adults and prey probably explains these behavioral differences. Many of the snowy owls wintering on the Great Plains are migratory and return to the same areas every year, defending a territory large enough to meet their feeding needs. A large percentage of these owls are also adults, which seem to have less patience for other snowy owls on their winter territories.

Irruptive birds, on the other hand, are often young birds with a less developed sense of territory in novel lands, and they appear to tolerate closer proximity to one another. In these places at these times, there are other snowy owls, appearing more like adults, that do not tolerate perching next to others or within a parliament (group of owls).

In southern Canada and the northern United States, many of the wide-open or lightly wooded expanses that allow snowy owls to find enough food to survive the winter are on public lands such as parks or beaches, or on agricultural lands inhabited by, or in close proximity to, people. Snowy owls are dependent on these lands under our care if they are to survive the winter and return to the Arctic to breed in the spring.

Paul Bannick is author/photographer of the book "The Owl and the Woodpecker." He's talked at bird festivals and conservation events across the country, and he'll be one of the featured speakers at the 25th Kachemak Bay Shorebird Festival in Homer starting May 4. His photos have appeared in the New York Times, Audubon and other publications. Reach him on his website.