In August 1923, Bobbie was an ordinary collie when he and his people, Frank and Elizabeth Brazier, drove from Oregon to the Midwest on the nation's "auto trails." Lost to his vacationing family in Indiana, the ordinary Bobbie then achieved the extraordinary, walking home nearly 3,000 miles and crossing the Rockies in the dead of winter. Headlines across the country would dub him "the Wonder Dog."

In 1923, there were no highways. The dirt roads were dusty, narrow and bumpy, and cars moved a lot slower. Hours might pass before Frank and Elizabeth Brazier saw another vehicle. At each day's end, they stopped at a "tourist camp," unpacking for a night of camping, then repacking and moving on.

Through the long eastbound days, Bobbie entertained himself. If he spotted a rabbit, he launched off and raced after it. Sometimes it was an hour before he returned to the road. As Bobbie neared, Frank slowed a bit, so he could hop aboard. 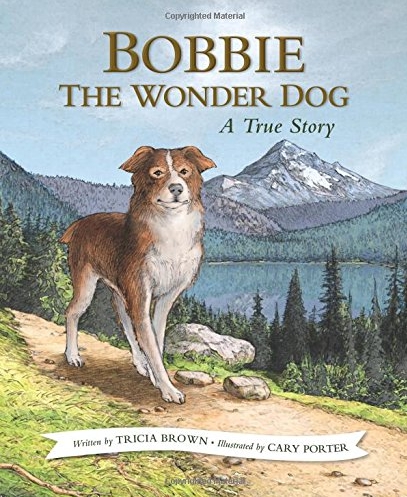 The Braziers never worried. No matter how far away their dog ran, no matter how tired he got, he always found his way back. There was no stopping Bobbie.

Through the Rocky Mountain passes … and across the Great Plains, Nebraska … Iowa … Illinois. At last, Elizabeth read a border sign: "INDIANA! We're almost there."

At last, the dusty car pulled up to a house full of relatives. Bobbie wiggled and licked as his people hugged and shook hands. Then Frank checked his watch. "I'm going to gas up the car now, while I can," he said. "Back soon. Let's go, Bobbie!"

At the filling station, Bobbie slipped off to look around. Suddenly, Frank saw him racing around a corner, chased by a pack of snarling dogs. Frank shook his head. Bobbie knows his way out of trouble, he thought. He won't be long.

The tank was filled, the bill was paid, but Frank was still waiting. He tooted his car horn. That usually worked. He cupped his hands and called, "Let's go, Bobbie!" Nothing.

He's probably gone back to the house, Frank thought.

But Bobbie wasn't back at the house.

The anxious couple drove around town that evening, honking and calling Bobbie's name until midnight. In the morning, Frank placed a newspaper ad. He was desperate — they'd have to continue their trip soon. They'd promised to visit more family in other towns.

"He'll probably show up the minute you leave," their relatives assured them. "We'll keep him until you come back through."

"Sure," Frank said. But inside he was worried. Where was Bobbie? Nearly a month later, when Frank and Elizabeth returned to Walcott (Iowa), there was still no sign of Bobbie.

Miserable, the Braziers headed home without their beloved pet. How would they tell their girls that Bobbie was lost or … worse?

Could he be dead?

But Bobbie wasn't dead, although in the weeks and months that followed, he would face great danger. And he hadn't been adopted, though several families would try to make him their pet.

And he certainly wasn't lost.

As it turns out, Bobbie knew exactly where to go. He had decided to walk back home to Oregon.

Six months to the day that Bobbie went missing, the thin dog limped down the main street of his hometown and into the Braziers' café. Weak as he was, he ran up the stairs and leaped onto Frank's sleeping form. Bobbie lifted his nose and howled and cried so long and loud that shopkeepers poured out into the street, thinking a dog had been hit by a car. Bobbie could not be persuaded to leave Frank that day. As one journalist wrote, "Now and then he broke out crying loudly again. Nor was he the only one who wept."

Bobbie's journey thrilled readers around the country, who wanted to know more about "the Wonder Dog." Letters and presents poured in daily. Some wrote that they had fed or sheltered a collie, but he wouldn't stay long.

Frank wrote about him in "Animal Pals," a book of dog stories, and Bobbie starred in a silent movie. Bobbie's feat even appeared in "Ripley's Believe It or Not!" Bobbie got so famous that at one weeklong appearance, more than 100,000 people showed up to pet him. When he died in 1927, the mayor of Portland gave his eulogy.

Bobbie's story is said to have inspired the 1943 MGM hit movie "Lassie Come Home," starring Roddy McDowall, a young Elizabeth Taylor and the canine actor, Pal. It earned an Academy Award nomination for cinematography and Lassie received a star on the Hollywood Walk of Fame. A big hit, it earned more than $4.5 million for the studio.

Read the rest of the story in "Bobbie the Wonder Dog: A True Story," copyright 2016, by Anchorage author Tricia Brown, illustrated by Cary Porter, published by Graphic Arts Books, reprinted with permission.

Brown began her career in journalism, writing for the Fairbanks Daily News-Miner, and later freelancing for the Anchorage Daily News, before a stint as editor of Alaska magazine. She has been in book publishing for 20 years, and has written two dozen books for adults, as well as nine books for children, all on Alaska subjects … until Bobbie the Wonder Dog, an irresistible story from the Pacific Northwest that had never specifically been told for children.