Inupiaq: The language I can write and speak, but don't understand 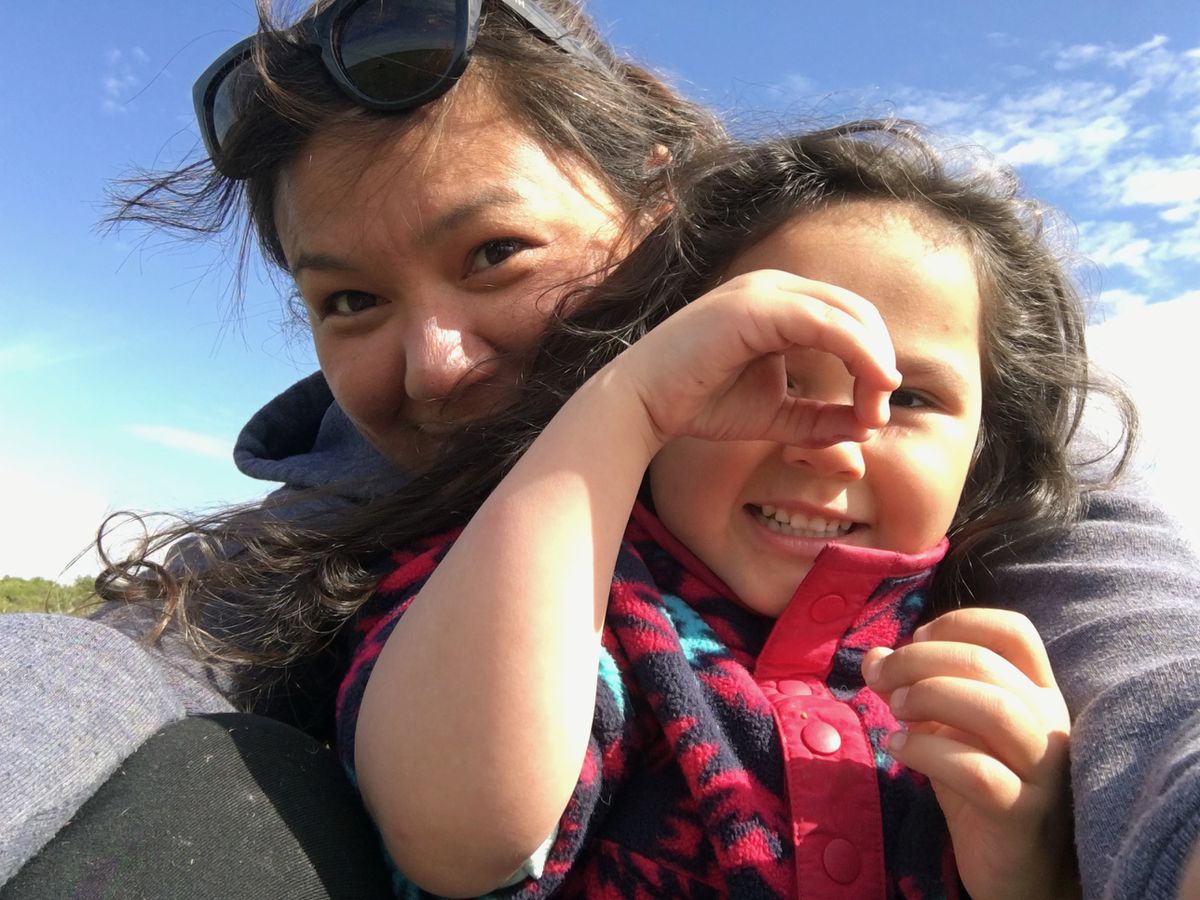 Laureli Ivanoff, left, with her young friend Niv. After spending four days with Niv, Ivanoff says she learned more Inupiaq than she had from any other teacher. (Courtesy of Laureli Ivanoff)

Laureli Ivanoff, left, with her young friend Niv. After spending four days with Niv, Ivanoff says she learned more Inupiaq than she had from any other teacher. (Courtesy of Laureli Ivanoff)

I loved being at my Gram's house. Papa and Gram spoke to each other using the language in which sounds are made using every part of the mouth, from the uvula to the lips. It's a full, warm language to me.

A language I don't understand.

Mom understood. Gram kneaded dough at the kitchen table. Or mixed her goulash at the kitchen stove. She'd speak with mom and my aunt Huda, who both sat there quietly, listening intently. Now and then, Gram would say something that sparked from-the-belly laughter. In that house, at 5 years old, I'd sit there listening to Gram and watch how Mom and my aunts and uncles responded. In those moments, with the women I come from, in the joy-filled room, I felt disconnected. I didn't understand a single word my grandmother spoke, never mind the humor in her delivery.

"What did she say?" I'd ask Mom with a hopeful, expectant smile.

I'd see that under Mom's eyes were churning thoughts and she'd finally respond, often wiping laughing tears away with, "It can't be translated. I can't explain."

I loved those women.

I hated that situation.

In our community, Gram's generation was the first to attend school in a building. Gram's generation was punished if they spoke Inupiaq in that building. Punished for being themselves. Punished for speaking a language their teachers didn't understand. Teachers, I'm sure, felt excluded and policies were written to strip the language from Eskimos. Now I felt stripped and excluded. In my Gram's home, with my own family.

Sometimes today, I try so hard to understand my grandparents and their parents. And I wonder what strong pressures they felt. Why didn't they fight the principals and the policies that caused so much eventual harm and disconnection within our families? I try to envision myself as my grandmother's mother, realizing the world was changing, realizing a different lifestyle was at the brink, realizing her children needed to be ready. Prepared.

I realize my grandmother's mother was just like me at 5 years old, in my grandparents' home. Not understanding. Not connected with the people who arrived in her community, bringing schools, oranges, coffee and guns. And wanting her children to understand what was happening around them. What was happening to them.

In my efforts to reclaim identity and soothe the girl who sat alone in her grandmother's home, I hungrily learned what I could. Fifty years after our grandparents were struck, after their ears were pulled, after they were punished for talking, the school system made a shift. Schools now encouraged the use of Inupiaq and we had 45 minutes of learning how to spell and write the language. While I eagerly soaked up what I could from Mrs. Katchatag, that 45 minutes wasn't immersion.

‘We don’t talk that way’

So I took two semesters of conversational Inupiaq in college. I was beginning to understand the use of endings to form sentences. I came home at Christmas, all excited, to speak the baby talk I could to my Gram. Not feeling well, I told her "Niġilaitchuŋa." That phrase says, "I can't eat."

"Aaaaye. We don't talk that way," Gram said. And it hurt. I worked so hard to connect. To learn what I could to talk with her. To prepare myself to return home and understand what I couldn't while growing up. But in using the dialect from up north that I'd learned, I understood that my Gram did not want to hear her granddaughter using endings and sounds from elsewhere in her language. And I felt powerless. And again, ashamed.

A person of hope who works hard when it's difficult to see the goodness, I still try with this one. I try to be thankful I can at least make the sounds using the muscles from my uvula to my lips. I can say the hard "g" at the back of the throat and the thla sound when flattening the tongue. I understand words and phrases and can sing the hymns translated into Inupiaq at church. But it never feels like enough.

Laureli Ivanoff lives in Unalakleet where she's raising her two children, Joe and Sidney. They eat a lot of fish and are very proud of their Yorkiepoo named Pushkin.

Laureli Ivanoff is a writer who lives in Unalakleet, where she's raising her two children, Joe and Sidney. They eat a lot of fish and are very proud of their Yorkiepoo named Pushkin. She is former news director of KNOM radio in Nome.