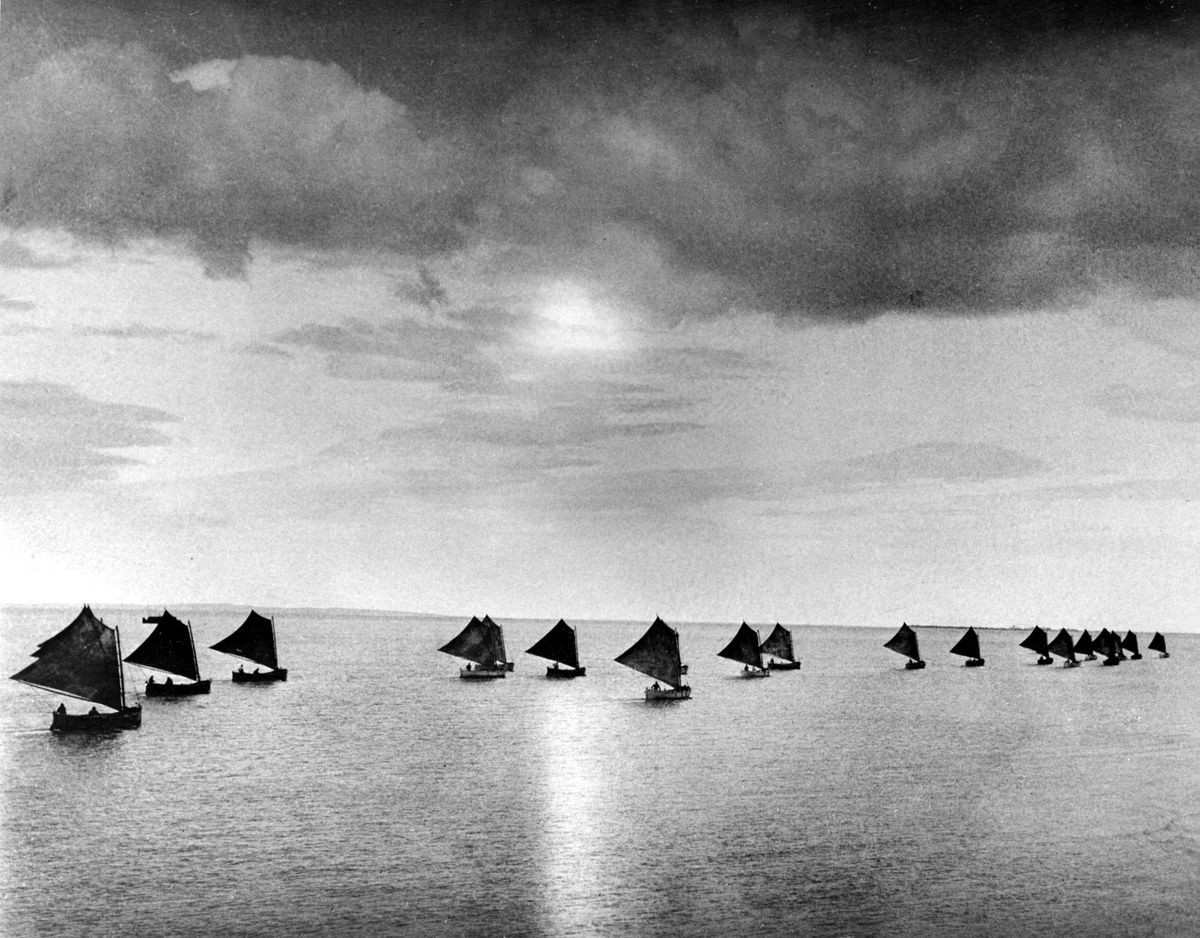 The reason I was against power boats was because every Tom, Dick and Harry might fish. After legalization of power and the establishment of limited entry, it seems there are now twice as many fishermen. These include doctors, lawyers and other professionals; it seemed all the pencil pushers started fishing. During sailboat days, they wouldn't have been able to fish, because they might have been afraid to sail. The rigors of sailing and living in an open boat would have been overwhelming. I may be old fashioned, but I still feel that it's only those guys who know how to harness the wind who really know how to fish.

One hundred and thirty-two years ago, the Bristol Bay commercial fishery began on the shores of the Nushagak River when the first cannery went into operation and canned a little more than 4,000 salmon.

Canneries are large industrial operations. In the early days, coal and steam provided the power to run complex systems of boilers, belt-driven pulleys and winches needed to butcher, cook, can and deliver salmon to the world. But when it came to actually catching fish in Bristol Bay, canneries relied upon the muscle of men and the power of wind.

To catch fish in Bristol Bay, canners imported and adapted a wooden sailboat developed for use on the Columbia River — a boat propelled by wind and crewed by two fishermen who pulled heavy cedar-corked linen nets by hand. The sailboat, roughly 30 feet long, was commonly known as a Bristol Bay "double-ender" because the shape of its bow and stern were similar.

Harnessed to the double-ender

Over the years, coal and steam, belts and pulleys gave way as canneries modernized and the methods for processing fish became more automated and efficient. However, the canneries of Bristol Bay decided not to modernize the fishing fleet and, with the backing of federal law, harnessed fishermen to the double-ender for decades beyond its obsolescence.

As draconian as the enforced use of sailboats may seem today, eliminating them was not an uncontested matter. Some fishermen, like John Nicholson quoted above, could foresee the fundamental changes that would follow if powerboats were allowed to fish in Bristol Bay.

The canning industry fought particularly hard to keep powerboats out. After all, it was in their economic interest. Canneries didn't need powerboats. They could get most of the fish they needed from sailboats, and sailboats were cheap to operate. Quality was not the driving market force that it is today because all the fish went into cans. Each cannery owned a fleet of double-enders, decided who would fish in them, and towed the boats they owned with the fishermen they chose to the fishing grounds.

Fishermen were essentially indentured servants and sailboats helped canneries keep them that way. Power held the prospect of independence for fishermen.

Most fishermen, however, pushed for powerboats because power represented safety and the possibility of rescue. Sailboats were bound to the wind, weather and tides. A fisherman's greatest fear was getting stranded on a sandbar. Stranded double-enders often overturned when strong winds pushed the returning tide. A fisherman in the water was a dead fisherman. Without engines there was little chance of escape or rescue.

But the canning industry pushed back, arguing the consequences of shifting to power would bring economic havoc. The industry contended that powerboats would take so many fish that runs would be depleted to the point that closures would prevent anybody from making money and that local residents, many of whom were setnetters, would lose out to nonresident fishermen.

According to an article in the Dillingham Beacon in the fall of 1950, the canning industry claimed fishermen from Washington state, Southeast Alaska, Cordova and Kodiak were "already planning to take their boats over the (15-mile) Iliamna Portage" from Williamsport to Iliamna to fish Bristol Bay in 1951. The canneries maintained they would have to rely upon these fishermen for fish because they could not afford or justify investing in powerboats. Most of these fishermen, the canneries noted, did not live in Bristol Bay and would spend their earnings elsewhere.

These economic arguments rang hollow. Most of the fishermen who fished Bristol Bay sailboats were not locals. Residents of Bristol Bay only really broke into the fishery during World War II, when so many fishermen were called to war duty that the canneries had to turn to locals to harvest fish. With the end of the war, the demise of the sailboat was inevitable. Fishermen returning from the mechanized horror of World War II were not going to tolerate fishing for long from a 19th-century relic.

Two events after the war tipped the scales in favor of powerboats. In 1948, unusually big storms swept through Bristol Bay at the peak of the run, capsizing a number of sailboats and killing at least five fishermen, a tragedy that in the lore of Bristol Bay became known as the Bloody Fifth of July. While there was debate at the time whether power would have made a difference, the sailboat nevertheless became the scapegoat.

In 1949, the territorial legislature created a board of fisheries to give Alaskans a greater voice in the regulation of Alaska's fisheries, then managed, or mismanaged in the view of many, by the U.S. Fish and Wildlife Service. Criticizing the service for overlooking the safety of fishermen, the board urged a switch from sail to power, noting there were more dangerous fishing grounds, such as the Copper River Flats, but due to "motor-propelled fishing craft, the loss of life has been extremely rare."

The tragic loss of fishermen in a storm on the Bloody Fifth of July, and the creation of a territorial board of fisheries in 1949 tipped the scales, and in 1951 powerboats were allowed in Bristol Bay. It is estimated that 86 powerboats fished that first year, compared to 631 sailboats. By 1952, West Coast shipyards were building powerboats for Bristol Bay and canneries were putting engines in double-enders. When the salmon returned in 1952 there were 895 powerboats ready to intercept them, and only 223 sailboats.

By the mid-'50s the double-ended sailboat, the iconic image of the Bristol Bay commercial fishery, was gone. However, many of the sailboats the canneries converted to power survived to continue fishing for many years, some into the 1970s.

In retrospect, Johnny Nicholson was right. Power opened up the fishery to many who would have been unable to endure the rigors of fishing from a sailboat. Power changed the face and economics of the fishery to such an extent that limited entry was imposed in the 1970s to restrict the number of fishermen and prevent overfishing.

Looking back over the long history of the Bristol Bay fishery, it is remarkable that so much of that history was under sail. The era of the double-ender began before manned flight was invented and continued into the jet age. For 66 years, sail power dominated the salmon harvest.

So, 2017 is a milestone in the history of Bristol Bay — when the number of years fishing under power catches up to the years of fishing under sail. The era of power will finally overtake the "sailboat days" next year.

Tim Troll is executive director of the Bristol Bay Heritage Land Trust, an organization protecting the salmon habitat of Bristol Bay for nearly 20 years. He is the author of "Sailing for Salmon, The Early Years of Commercial Fishing in Alaska's Bristol Bay — 1884 to 1951."