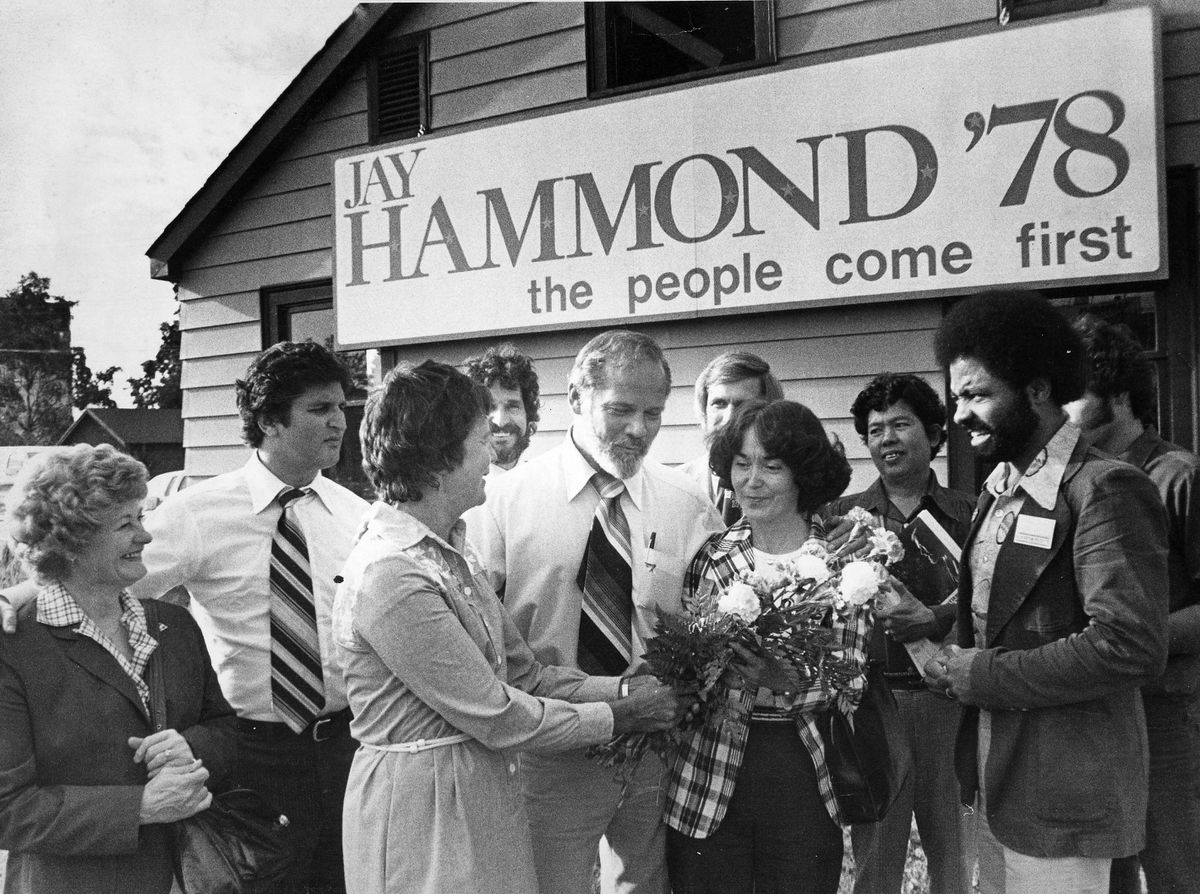 Jay and Bella Hammond greet supporters at a campaign headquarters during his run for a second term as governor in 1978. (ADN archive)

Jay and Bella Hammond greet supporters at a campaign headquarters during his run for a second term as governor in 1978. (ADN archive)

LAKE CLARK — I was thinking about the late Gov. Jay Hammond — how much I miss him and how fortunate I am to have called him a neighbor and friend for many years. Then I thought about his first book, "Tales of Alaska's Bush Rat Governor," and wondered where the nickname came from.

Hammond was a helluva guy and it's a fitting sobriquet, but can't say I ever heard anyone actually call him that. It was usually Jay, or Governor Jay. His grandkids called him Uppa.

Nicknames can be endearing, fun, mean, ironic and they often nail down a personality, physical characteristic or a skill more succinctly than given names.

The wrath of Kahn

Schoolyards are the birthplace of many monikers. With a name like Kahn, I was hardly immune. With little regard for exact spelling or my Germanic roots, a few school chums attempted to link me to an imaginary Mongol lineage by calling me Kublai or, more often, Genghis. Since I wasn't into brutal rampages or slinging arrows from horseback, the nicknames never took.

But Alaska and Alaskans have been blessed with some classic nicknames. Pulling from the world of athletes, pilots, politicians, nefarious characters (not to be confused with the previous category), entertainers and even towns, there are many to choose from. I offer a few favorites. These are personal choices, those registering high on my like-the-sound-of-it meter — and not a judgment of accomplishment or moral character.

• Shishmaref Cannonball — Legendary Iditarod musher Herbie Nayokpuk's nickname has long been at the top of my list. It doesn't hurt that the Shishmaref man was admired and respected — and apparently as cool as his nickname. Just recalling his warm and engaging smile, I find it impossible to suppress a grin.

• Thrill 'em, spill 'em, no kill 'em Gillam — To earn the rather lengthy title, gutsy pioneer bush pilot Harold Gillam flew for years, experiencing both minor accidents and serious crashes without losing a passenger. His record lasted until his last tragic flight in 1943.

• Captain Zero — Taking my own feelings about the politicians on each side of this name out of the equation, when Rep. Don Young called Gov. Sean Parnell Captain Zero during a public radio interview, an instant classic was born. Some might suggest that Don Young's abrupt and sometimes caustic tongue was finally put to good use. Unable to leap small buildings in a single bound?

• Alaskan Assassin — Trajan Langdon, the first Alaskan to play in the NBA, could swish 'em from downtown like nobody's business. A star at East Anchorage High School and Duke University, he certainly killed the hopes of a lot of opposing teams.

• Kikkanimal — Olympic cross-country skier Kikkan Randall's high pain threshold and intense training as a running star at East Anchorage High School earned her a nickname only slightly cooler than her own name.

• Mr. Whitekeys — Or Mr. Waikiki, as my father (who tends not to be overly concerned with pronunciation or spelling) calls the flamboyant musician whose DNA seems inextricably linked to Spam and the modern folklore of Spenard.

• Sarah Barracuda — Apparently a name earned from former Gov. Sarah Palin's aggressiveness as a point guard on the high school hardwood. Whoever said that sports imitate life might be on to something.

• Hobo Jim or Thunderfoot (in his earlier days) — Bonus points for a guy like Jim Varsos with two nicknames for the price of one. The foot-stomping balladeer has enough energy to support multiple handles — and break multiple strings on his guitar almost every time I've seen him play.

The catch in catchy names

School chums, teammates, siblings and parents come up with a share of appropriate nicknames, but I'd guess that often the unsung hero behind the radar wit of an iconic nickname is a creative writer or editor somewhere — perhaps a sportscaster or someone in the marketing department — a phrase-maker with an ear toward snappy alliteration or rhyme that puts the catch in catchy names.

Recently, I visited Bella Hammond and asked her if she knew where Jay's nickname, the Bush Rat Governor, came from. After a brief pause she said, "I wouldn't be surprised if he came up with it himself."

I hadn't thought of that — but if, in fact, Jay was the creator of his own nickname it lends credence to my theory. Jay Hammond was no slouch when it came to marketing his often brilliant ideas — and he was a gifted wordsmith who could flip a phrase and infuse it with wit and insight.

I expect most readers are equally gifted. So if there are others you're fond of that I'm overlooking, or names you'd propose for our current constellation of athletes, pilots, politicians, nefarious characters, entertainers and towns, let us know in the comments section.