Here are the 20 Anchorage marijuana shops closest to opening 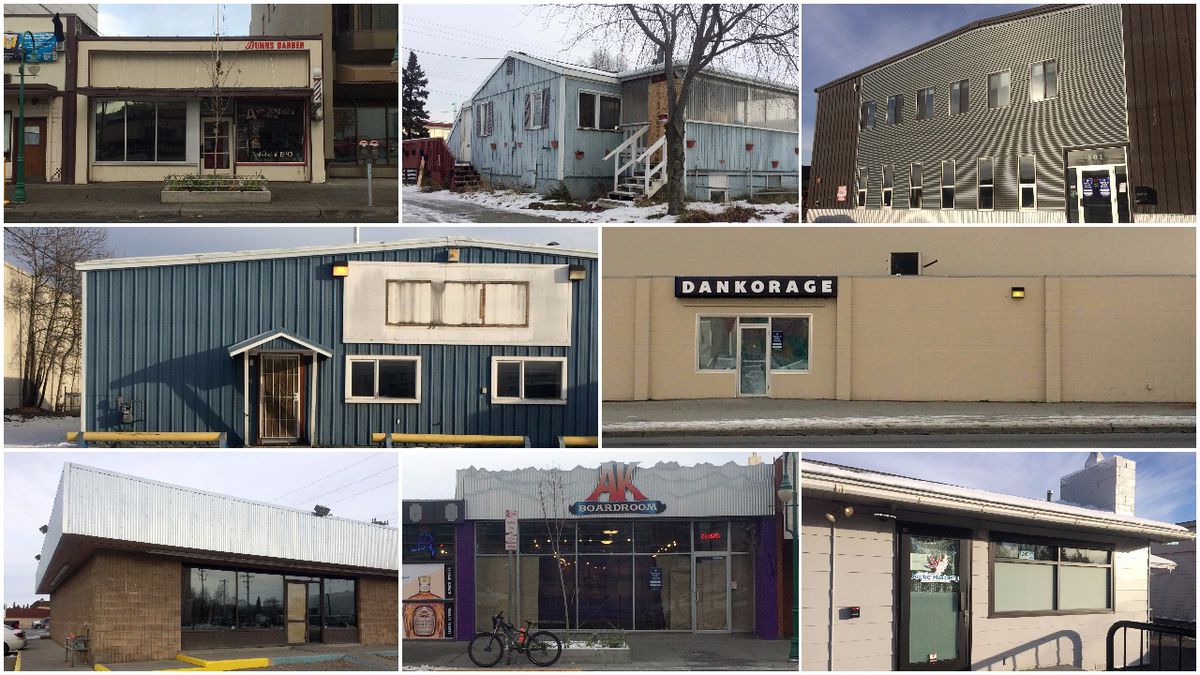 Empty storefronts scattered here and there across Anchorage are about to be reincarnated as part of Alaska's newest industry: marijuana. Several are hoping to open before the end of the year.

Alaska Dispatch News compiled a list of 20 shops closest to opening in the Anchorage Bowl, along with photos of where they plan to be located.

Many of the shops are clustered in the Spenard and Midtown areas, downtown, and the industrial/warehouse area south of Dowling Road. This clustering is due to state-mandated buffer zones between schools and other facilities, and because many properties are older, and less expensive, than the city's prime real estate — an important consideration for an industry barred from receiving federally insured bank loans.

The shops are listed below, along with their current license status determined by the state Alcohol and Marijuana Control Office:

• Active (approved by both state and local officials);

• Delegated (received state approval but pending inspection and other approvals);

• Incomplete (application has been reviewed by the state but returned for more information); or

Many more Anchorage retail shops have started the application process, but those are not included here. These stores are organized by how far along they are in the licensing process, and then alphabetically within those groups.

Alaskabuds
1005 E. Fifth Ave.: Alaskabuds plans to open a storefront at the corner of East Fifth Avenue and Juneau Street. Nick Miller, co-owner of the shop, said he hopes to open at the end of November. "We have a huge remodel to do, and I'm trying to get the permits," he said. "The entire building is going to be gutted, and the outside will be redone."

Arctic Herbery
7107 Arctic Blvd.: At this shop on Arctic Boulevard and West 71st Avenue, owner Bryant Thorp said he already notices people pulling into his parking lot to see if the door is open. "I have that happen several times every hour," Thorp said. "I will probably continue turning on the open sign here and there. They spot the 'open' sign and slam on the brakes and they come in to see what's going on.  They're pretty sure there's no legal pot yet, but people are curious." Arctic Herbery was widely expected to be the first marijuana shop to open in Anchorage, as early as sometime this week, but the Anchorage Assembly on Tuesday threatened to pull the store's license over a television station's report about Thorp giving away free samples. The business also has a cultivation site at the same location.

Enlighten Alaska
2600 Spenard Road: Jane Stinson, co-owner of Enlighten Alaska, said the Spenard store is planning to open mid-December. "The biggest thing for us," she said, "is that we don't know what we don't know, and I think that's true for everyone. There could be a little glitch around the corner, a new regulation that comes up; everybody's kind of in the same boat. … The process has been very long and arduous."

AK Slow Burn Cannabis Outlet
2042 E. Third Ave., Suite A: Owner Lou Weaver is planning a retail shop on Third Avenue after a separate location at 1551 E. Tudor Road was put on hold because of its proximity to a church. He hopes to open the Third Avenue shop "not before the middle or end of January." Sarah Daulton Oates, a program coordinator with the state control office, said there are no marijuana-related plans right now for the Tudor Road site, according to the state, and Weaver has also initiated a cultivation license.

Alaska Fireweed
715 W. Fourth Ave.: Where snowboard and outdoor gear shop AK Boardroom once was, Alaska Fireweed plans to open its doors. Co-owner Susan Nowland said the goal is to open before the end of the year. "We have very little renovation to do," she said, "so we hope to move quickly once we get through the municipality process."

Alaskan Leaf
1211 W. 36th Ave., Suite A: Loren Dreyer, co-owner of this Spenard retail shop and cultivation facility, said "if everything goes perfect," his store "could be open by mid-January." He plans to cultivate enough marijuana so he can "provide my own supply the first year or two until the price has normalized," he said. "I think in the long run, doing it slow and steady, doing it the right way, is very important."

Dankorage
2812 Spenard Road.: This shop behind REI has already put up its sign and is aiming to open sometime in early December, said co-owner Lily Bosshart. She said her experience working to open Dankorage has been "fairly bureaucratic, and that's positive and negative. I feel like the people we've worked with have been very positive and supportive. I feel like the people in the government at the city and state level want this to happen."

The House of Green
3105 Minnesota Drive. This shop hopes to open in what's currently a boarded-up house at Minnesota Drive and West 31st Avenue. Co-owner Michael Dillard said he's still dealing with rules for how far the shop is from a park across Minnesota, depending on how it's measured. "At this point right now, I'm not sure where we stand," he said last week. "We're dealing with municipality stuff … We are moving forward. … We'd like to be open about spring, but it depends."

Uncle Herb's
6511 Arctic Spur Road: Lloyd Stiassny, the owner of this shop in an industrial Anchorage neighborhood, said he "will be lucky to open sometime early spring." He also said he isn't "rushing into things. No particular reason, I guess. I've got to go through a very extensive municipal review."

AK Fuzzy Budz and Alaska's Green Light District
2612 Eagle St. and 407 E. Northern Lights Blvd.
License statuses: Complete and under review (respectively): These two businesses are owned by brothers Troy and James Millhouse, and are just around the corner from each other in Midtown. AK Fuzzy Budz is planned as both a retail and cultivation facility (the cultivation license status is active), while Alaska's Green Light District on Northern Lights Boulevard will be retail. James Millhouse said he's hoping to open the AK Fuzzy Budz store in January, "but I have no idea." He also wasn't sure when the shop on Northern Lights Boulevard might open, "because we just put our application in about two weeks ago," he said.

AM Delight
3902 Spenard Road: Angela Robinson, listed on the state's website as an affiliate for this shop, did not return calls or an email seeking comment for this story.

Hillside Natural Wellness
8629-8639 Toloff St.
License status: Incomplete: If you stop by the Toloff Street location for Hillside Natural Wellness anytime soon, you'll find an empty lot. The owners are planning on constructing an entirely new building — just under 3,000 square feet — for this South Anchorage shop. Co-owner Cade Inscho said the business is planning on building through the winter and "being open by March."

AK Frost
5200 A St., Suite 102: Kyle Denton, a co-owner at AK Frost, said "it'll be awhile" before the shop opens, probably in spring. He said the business is trying to stay "pretty low key." Denton also said AK Frost plans to have a cultivation facility, but doesn't have any product yet.

Alaska Green Cross
211 E. Dimond Blvd., Unit A: Currently a glass pipe shop in a strip mall on Dimond Boulevard, this proposed retail marijuana store is "shooting for an end-of-the-year time frame," said co-owner Wes Bennett. "We set up originally as a glass head shop because we wanted something that could sustain our business while we are in the process of opening a retail store," he said.

Alaskasense
521 W. Tudor Road, Unit 201 and 202: Evan Neal moved up from Colorado to be the director of operations for Alaskasense, and said the shop is hoping to open in the next couple of months. A cultivation facility will also be on-site. "We're hoping for the holidays, we've got our fingers crossed. We're still in construction," he said, adding that "Cannabaska" will be the name on the Tudor Road storefront. Smadar Warden, the owner of the shop, has also initiated another license with the state for a separate retail store at 211 E. Fourth Ave., state records show.