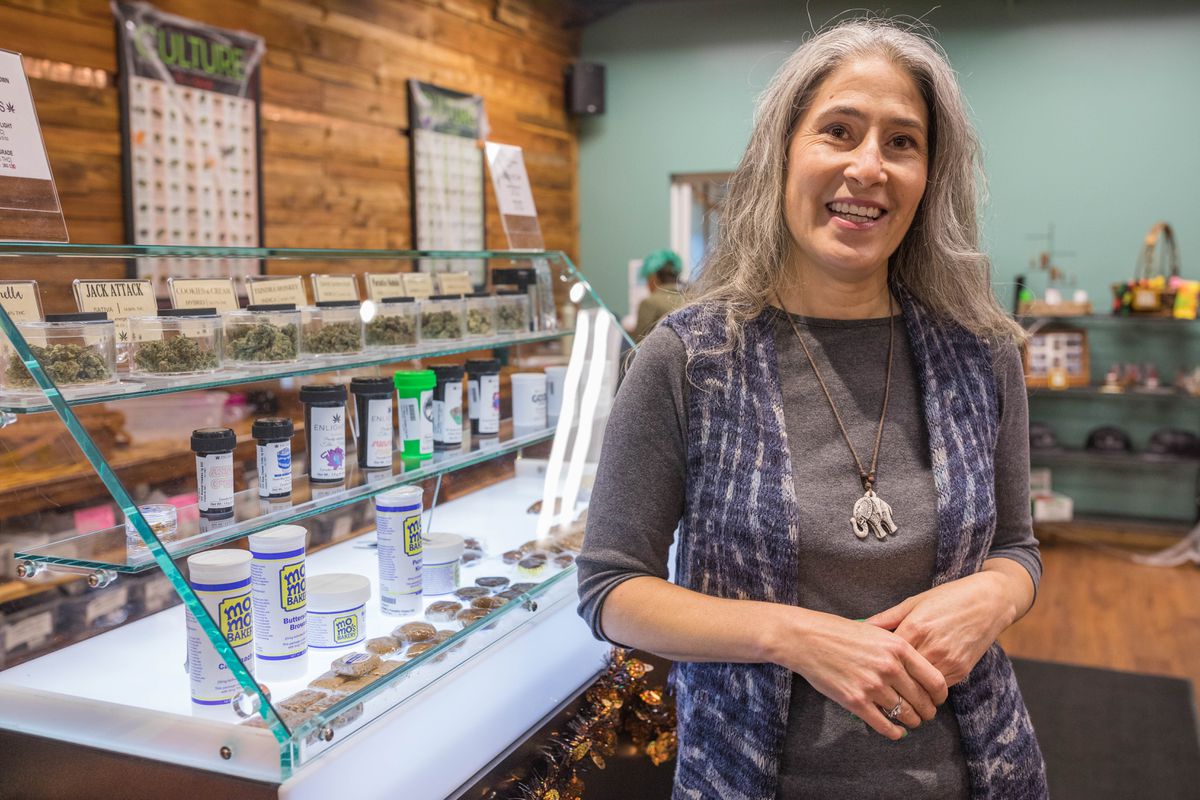 An Anchorage women's cannabis startup with unlikely roots is expanding beyond Alaska.

Ellementa is a business that creates networks for women who want to learn more about using cannabis. It held its first meeting in Anchorage this year.

Aliza Sherman, the CEO and co-founder, said she came up with the idea while thinking of ways to expand her digital marketing business into a new industry.

"We like building women's communities, and we like helping companies reach women in a better way," Sherman said of herself and two co-founders.

Sherman says she was part of the "just say no generation." She never viewed marijuana as something that could have potential health benefits.

"I tried some one night because I had been suffering from really debilitating insomnia and arthritis pain, and I slept through the night," Sherman said. The next day, "I cried," she said.

"That was the 'aha' moment," Sherman said.

In April, more than 40 women packed a marijuana shop on Spenard Road for Ellementa's first meeting. The topic was cannabis and pain management.

The main presenter, Geneva Cowen of Alaska Cannabis Exchange, talked about CBD, a compound in cannabis that has shown promise in treating the symptoms of various ailments. Women in the audience discussed their own experiences with health issues.

Fancy "stash bags" in different prints and colors were being sold at a counter in the back. Ellementa got a portion of those sales, Sherman explained. After the presentations, people lingered to buy products at the shop and talk to one another.

Now, Ellementa has expanded to 10 more areas across the U.S., from New York to San Francisco. Sherman has her eye on Canada and dozens of other cities.

Still, Sherman hesitated when talking about her own cannabis use. "I still have a lot of fear, and the stigma is still deeply ingrained," she said.

On the search for good information

Sherman is something of a serial entrepreneur. She has five different business cards. She's written 11 books, mainly guides to business and the internet.

"I kind of like to change it up and look for opportunities to fill needs in the marketplace," Sherman said.

In the 1990s, the opportunity was the internet. So Sherman started Cybergrrl Inc., a women's informational site. In 1995, a Newsweek article called her a "cyberheroine" in a list of the 50 most important people on the internet. Along with that, she started an organization through which women could discuss emerging technology.

Now, Sherman has applied that same idea to cannabis — women helping other women learn about something "complex and misunderstood," she said.

In Ellementa, local organizers put the meetings together. Each meeting, usually held monthly, focuses on a particular aspect of cannabis. Speakers, often from cannabis-related businesses, will discuss the topic of the day. Afterward, the business that has agreed to host the meeting will let people linger to buy products.

That organizer takes a cut of the revenue from admissions and business sponsorship. The rest goes back into Ellementa.

At each event, women are surveyed about the topics they're most interested in, Sherman said. The No. 1 topic? Pain relief.

Many women are looking for basic information, Sherman said – like the different ways to consume marijuana.

One challenge in providing that information is how much research lags behind the health claims made about cannabis.

"I think we're all running into that problem," Sherman said.

Since cannabis is listed as a Schedule 1 controlled substance – alongside LSD and heroin – research in the U.S. has been limited.

Few of marijuana's purported benefits or harms have been shown to be conclusive, according to a large study from The National Academies of Sciences, Engineering and Medicine, published in January.

That lack of quality research is a problem, Sherman said. But it's a growing field. Between anecdotal evidence and new research, things are slowly improving.

"All we can do is pass along the information," she said.

Sherman runs Ellementa with two other women, Melissa Pierce, a documentary filmmaker from Chicago, and Ashley Kingsley, an entrepreneur who lives in Denver.

"Aliza continuously reached out to me until I said yes," Pierce said of why she joined the team. Pierce has experience building women's networking groups, and her title is chief operating officer of Ellementa.

Despite their business venture, neither Sherman nor Pierce uses cannabis much.

Pierce said that before she got on board, she had to examine her own biases around cannabis.

Running a national startup from Alaska has been interesting, Sherman said.

On one hand, there's an advantage to being in Alaska – a "cool factor" that people in other states respond to. But on the other hand, being treated seriously can be a challenge.

"We're building a serious business, we really are," Sherman said. "We're all in."