Cannabis for dogs? A look behind the CBD pet treat trend 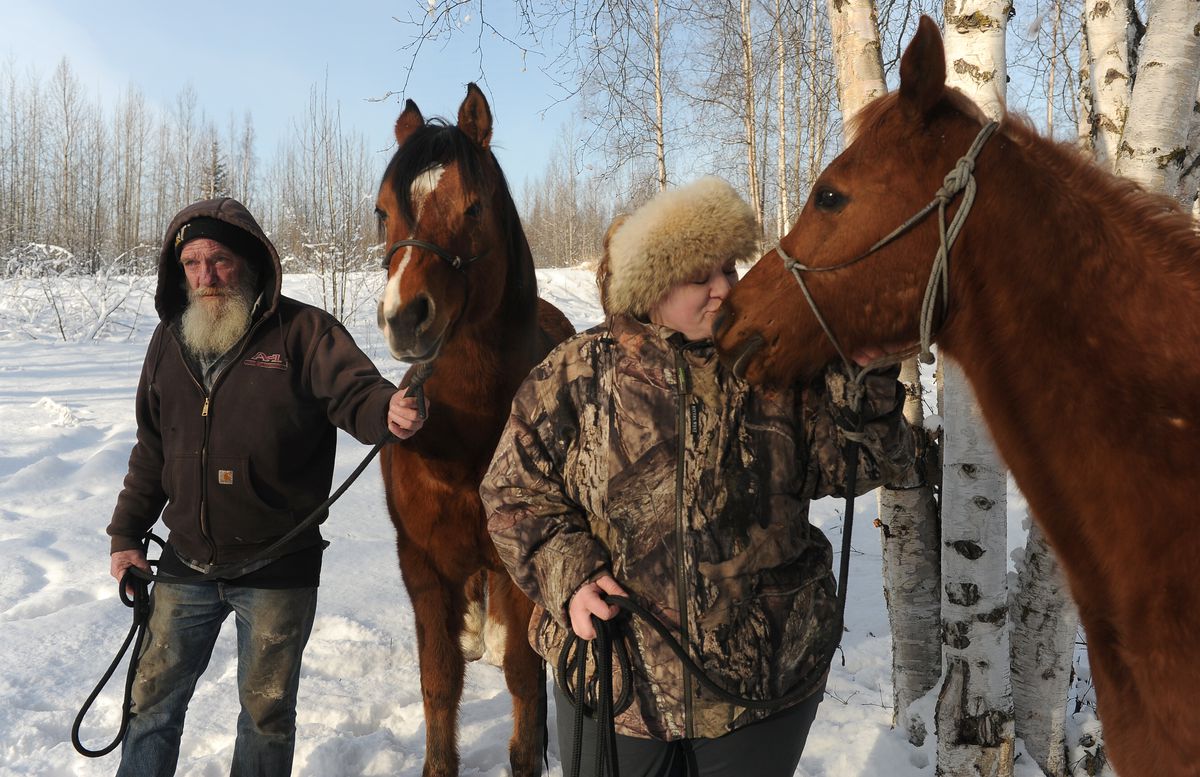 A few years ago on New Year's Eve, Deanna Quinn's neighbors set off fireworks that exploded right above her Peters Creek property.

Gus, her 15-year-old Arabian horse, "went bananas," Quinn said. He took off running and crashed into a fence.

A year later, Quinn gave Gus his first doses of CBD, a non-psychoactive cannabis extract that has been touted anecdotally as a pain reliever and a potential medicine for a wide variety of ailments. As the fireworks went off, Gus stayed still, calm, "chilled out."

"It was really incredible," Quinn said.

Dosing pets with CBD is an emerging trend among pet owners in Alaska, say a growing group of businesses that sell it for veterinary use. A number of Alaska businesses are now making and selling CBD pet treats, extracts and oils. Though some pet owners swear by it, the science supporting their success stories is thin. And regulation of CBD — a product used by humans, too — is virtually nonexistent.

At AK Bark, an Anchorage pet shop, owner Mark Robokoff said that sales took off after he started selling CBD 18 months ago. CBD products now make up 50 percent of his shop's gross revenue.

Robokoff says he's heard from hundreds of pet owners who have seen old arthritic dogs walk more easily, anxiety-ridden animals staying calm under stress, and a huge reduction in seizures in animals that suffer from epilepsy.

But how much do we really know about CBD and its effects on pets? And what considerations one should weigh before treating your pet with CBD?

CBD's full name is cannabidiol. Like THC — or tetrahydrocannabinol, the psychoactive ingredient in marijuana — CBD is one of the chemical compounds found in cannabis plants. Unlike THC, CBD is non-intoxicating and won't get you high. Humans use CBD to treat chronic pain, and it has shown promise in treating a wide range of ailments. Research has shown it reduces seizures in children with severe epilepsy.

Stephanie McGrath is a veterinarian and assistant professor at Colorado State University's Department of Clinical Sciences, College of Veterinary Medicine and Biomedical Sciences.

McGrath just completed one of the first studies in the nation looking at the efficacy of CBD in treating dogs that have arthritis or epilepsy. The dogs showed no major negative side effects to the treatments, but McGrath still needs to crunch the data to see whether CBD actually helped the animals.

McGrath got involved in researching effects of CBD on dogs because there's almost no data available. There is one 1988 study, and a 2011 scientific review of CBD studies for animals, but it didn't include dogs.

Cannabis is listed as a Schedule 1 controlled substance at the federal level — the same classification as heroin and LSD — which has sidelined marijuana research for decades.

"The concern our membership has is worry about people extrapolating their own dosages, looking to medicate their pets outside the realm of the medical professional," board chairman Michael Whitehair told The AP. "This is an important reason for us to continue the research."

The legality of CBD is tenuous. On a federal level, CBD is still illegal. The state agency overseeing marijuana regulations says stores aren't supposed to sell CBD, although the state hasn't stopped them. And a new bill awaiting Gov. Bill Walker's signature would legalize hemp farming, which would mean that hemp products, including CBD, would fall under the purview of Alaska's Division of Agriculture.

Even with the legal confusion, CBD treatments are only increasing in availability and popularity.

BethAn Moseley started her business, AK Cannivore, after a friend asked that she make some treats for a dog who had Stage 4 lymphoma. That sparked a new hobby that quickly turned into a full-time job.

Moseley sells her treats — packed with superfoods like spirulina and wheatgrass, which she says give benefits in addition to the CBD — in pet shops from Nome to Valdez.

Moseley uses CBD herself for scoliosis and intestinal problems.

"You have energy. Your pain just kind of flushes away. So I guess it's kind of like a B vitamin with a super-duper Tylenol," she said when asked to describe the effects.

Anchorage resident Jennifer Patterson started treating her 13-year-old black Lab mix, Rita, with AK Cannivore's pet treats in January. Rita refused to take glucosamine, a vitamin that Patterson tried to give her for arthritis. About a week after she started eating CBD treats, Rita's energy seemed to improve.

"Her attitude seems happier," Patterson said. "She actually pretty much runs up our deck steps now."

Anxiety disorders, arthritis and epilepsy are three of the ailments most often treated with CBD, McGrath said. It's also used as an appetite stimulant and to treat chronic pain. But little is known about its side effects, she said.

"The biggest concern is that there's not a lot of data on how safe it is in animals," said McGrath. "So again, a lot of people are using it, but we don't know what dosages are safe. We don't know exactly what the CBD is doing systemically or long term effects on organs like the liver."

'We don't really know what's in a lot of these products'

We do know that THC is toxic for pets. Animals can become disoriented, nauseated, have respiratory troubles, or lose their balance, said holistic veterinarian Brooke Wilson with Susitna Holistic Veterinary Services.

If an animal eats, say, a marijuana cookie, it should be taken to the vet, Wilson said.

"We don't judge. We just need to know what happened so we can make sure (the pet is) OK," Wilson said.

Another concern is that CBD products are not regulated.

"We don't really know what's in a lot of these products," Wilson said.

In both 2015 and 2016, the FDA sent warning letters to a few companies whose products did not have the levels of CBD they claimed.

McGrath recommended choosing your CBD products carefully to make sure they have very, very low amounts of THC.

"I personally would contact the company and ask for what's called a certificate of analysis," McGrath said. "If they can't provide one, then that's a problem. They should be able to look into the exact formulation of this drug, so make sure the THC is very low, CBD is high. They should … know exactly what is in that drug."

To bypass some of these problems, Robokoff at AK Bark said he only carries products that get independent third-party testing. AK Cannivore does, too.

Can an animal get sick or die from ingesting too much CBD?

"We don't know," McGrath said. "There's almost always a toxic level of a particular drug, of any drug, but we haven't studied (CBD) enough to know what that level is. So in theory, yes, but we don't know what that dose is.

"Could they die from it? I have no idea. I mean, that might be a little extreme. But could they get sick from it? I imagine so," McGrath said.

While pet owners flock to CBD despite lagging research, the science may catch up eventually. Just as McGrath completed one study, she is beginning another one sponsored by the American Kennel Club for epilepsy research.

The University of California, Davis is studying cannabis use in pets, as is Auburn University's College of Veterinary Medicine in Alabama.