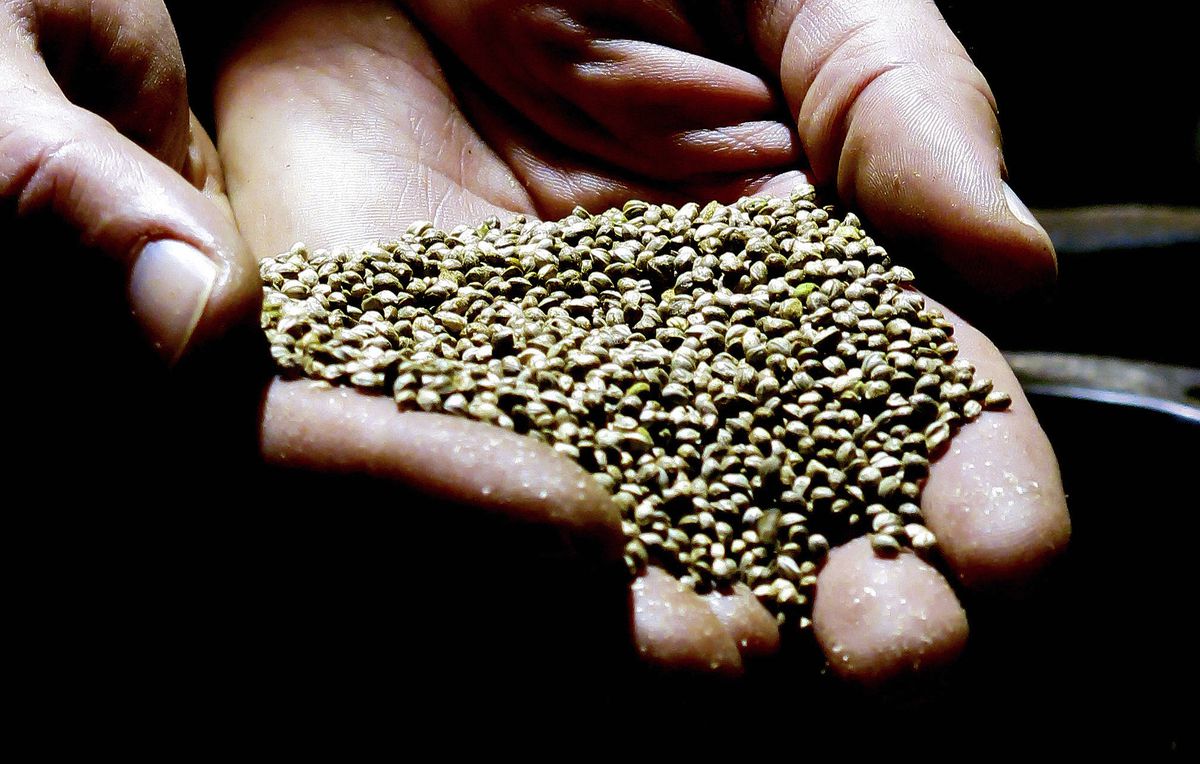 Hemp seeds being prepared for sale to industrial hemp farmers in Oregon. Since the approval of a 2018 law to allow for hemp cultivation in Alaska, more than 1,000 people have expressed interest in the program, according to the state Division of Agriculture. (Gillian Flaccus/AP)

Hemp seeds being prepared for sale to industrial hemp farmers in Oregon. Since the approval of a 2018 law to allow for hemp cultivation in Alaska, more than 1,000 people have expressed interest in the program, according to the state Division of Agriculture. (Gillian Flaccus/AP)

Though the state legalized a pilot project for industrial hemp agriculture more than a year ago, some hurdles still stand between farmers and authorized grows.

Hemp and marijuana both come from the same plant, but the variety that produces hemp is significantly lower in the psychoactive component, THC. Hemp can be used in a variety of products, from textiles to cosmetics to animal feed. One of its most widely known uses is in the dietary and medicinal supplement cannabidiol, or CBD.

Former Gov. Bill Walker signed Senate Bill 6 into law in April 2018, authorizing the state to move forward with developing a pilot project for industrial hemp growers. The program is authorized under the 2014 federal farm bill, which essentially allowed states to take the helm on developing these projects if they chose to without fear of federal raids.

For the past year, the Alaska Division of Agriculture and the Alaska Department of Law have been working together to hatch both a plan and regulations for that plan to allow farmers to start their own hemp grows. Officials say they hope to get the program rolled out this fall. David Schade, the acting director of the Division of Agriculture, told the House Community and Regional Affairs Committee in a hearing April 18 that the division aims to have a regulation package out for public review by May 15.

“Everybody is working really hard to get this along because we’re very well aware of the high level of interest in this project,” he said. “That is a really optimistic timeline but it’s one we’re going to do our best to push forward to meet.”

Like marijuana, industrial hemp is complicated to regulate because it has been illegal at the federal level for decades. Unlike marijuana, though, the federal government delisted hemp as a Schedule 1 substance in the 2018 farm bill, defining hemp as “the plant Cannabis sativa L. and any part of such plant, whether growing or not, with a delta-9 tetrahydrocannabinol concentration (THC) of not more than 0.3 percent on a dry weight basis.”

The farm bill provided no effective date for the delisting, but based on research, the Drug Enforcement Agency is no longer enforcing Schedule 1 regulations against hemp products, said Joan Wilson, the assistant attorney general with the Department of Law who is working with the Division of Agriculture on the hemp program.

A spokesperson for the U.S. Department of Justice confirmed that any parts of the marijuana plant that have that concentration level will be defined as hemp and will not fall under the DEA’s purview.

For now, people can’t grow hemp in their backyards the way they can under the state’s recreational cannabis rules. It will still have to be authorized through the pilot program, said Rob Carter, the manager of the state’s Plant Materials Center. As the Division of Agriculture works on the regulations for permits. the Plant Materials Center is working on growing its own cycle of hemp for research and testing purposes at the facility in Palmer.

“Without the regulations in place and absent the opportunity to register, producing or marketing industrial hemp … is still illegal,” he said during the House Community and Regional Affairs hearing. “It is to be noted that industrial hemp seeds are much harder to come by than one would expect and at a great cost.”

There’s a lot of interest among potential growers, Carter said; he estimated that more than 1,000 people had told him they were interested in growing industrial hemp. Optimistically, they would be able to apply and start growing in indoor facilities in the fall, he said. However, that depends on the state’s ability to get the regulation package approved, which will take about six months if everything goes smoothly, Schade said.

There are a number of roadblocks to that. For one, Gov. Michael J. Dunleavy’s proposed fiscal year 2020 budget cuts most of the Division of Agriculture’s existing budget, though neither the Senate nor House proposed budgets include his initial cuts. But one missing item so far is the receipt authority the division estimates it will need to adequately regulate an industrial hemp program.

Schade explained that the intent of SB 6 was for the hemp industry to pay its own way, but the division needs the receipt authority from the Legislature for the fees from the industry. Right now, the division estimates the needed authority at $500,000.

Rep. Harriet Drummond, who co-chairs the House Community and Regional Affairs Committee, said she would be willing to introduce a bill to grant the division that receipt authority.

“Otherwise it sounds like you’d have to come to a screeching halt waiting for receipt authority,” she said.

The regulations package also needs to clarify exact laws on hemp, Wilson said. That’s part of what the Department of Law is working on.

“Technically we could be requiring registration from any individual who goes to Natural Pantry and buys CBD oil,” she said. “I don’t believe that was (the Legislature’s) intent.”

CBD oil has boomed in popularity nationally, including in Alaska. Because industrial hemp is not being grown in Alaska, the oil is being moved across state lines, which is technically a violation of the federal interstate commerce laws.

In February 2017, the state Alcohol and Marijuana Control Office raided a number of retailers and seized CBD oil under a 2017 law defining CBD as a marijuana product. The 2018 Farm Bill changed that definition as long as CBD retains a low enough THC concentration, but the U.S. Food and Drug Administration retains authority to regulate it under the Food, Drug and Cosmetic Act. Under that law, introducing into interstate commerce food products to which CBD or THC have been added is illegal.

“That creates a lot of angst for those of us who have to regulate this potential industry,” he said. “The issue is under the FDA guidelines this is still illegal for interstate commerce, and yet we see these products out there for both animal and human consumption. We are taking this very seriously.”

Several aspiring industrial hemp growers also testified to the committee during the April 18 hearing. Shawn McDonough, who said he purchased several properties on the lower Kenai Peninsula with the express intent to grow hemp. Beyond just the CBD use, he said he’d seen uses for hemp in bioplastics and clothing, though he said he intends to use his grow for CBD extraction.

“It seemed like things were moving forward and then we kind of had the rug pulled out from under us and things kind of came to a standstill in recent months in the industry,” he told the committee. “We’d love to see things get back on track.”