With fees about to triple, some midwives worry about the future of the profession in Alaska 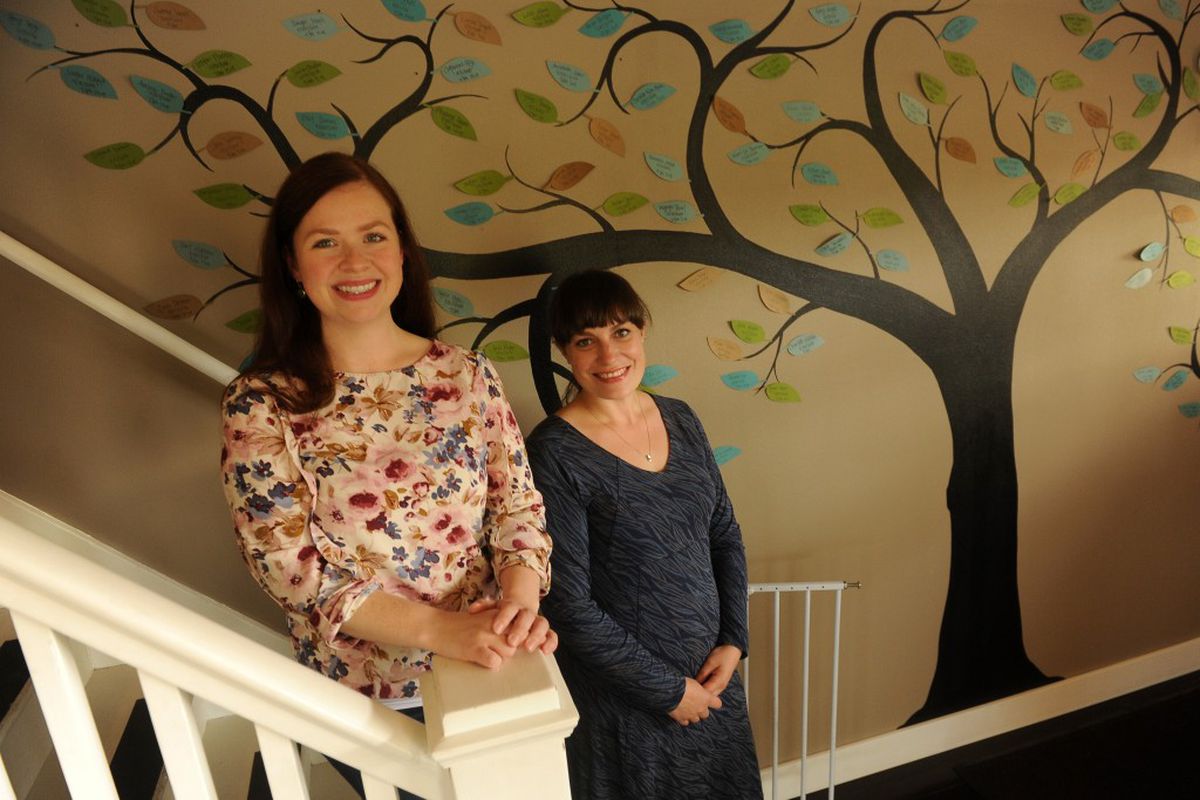 Stormy Antonovich, staff midwife, and Lena McGinnis-Kilic, midwife and owner of Heritage Birth Center, pose for a photograph in front of a tree with the names of babies born there on its leaves, at the Ninth Avenue facility on Friday, August 5, 2016 in Anchorage, AK. (Bob Hallinen / Alaska Dispatch News)

Stormy Antonovich, staff midwife, and Lena McGinnis-Kilic, midwife and owner of Heritage Birth Center, pose for a photograph in front of a tree with the names of babies born there on its leaves, at the Ninth Avenue facility on Friday, August 5, 2016 in Anchorage, AK. (Bob Hallinen / Alaska Dispatch News)

With fees expected to almost triple in the next year, licensed midwives are concerned their practice could be crippled in Alaska.

The state Division of Corporations, Business and Professional Licensing has proposed increasing the "direct-entry" midwife certification fee from $1,750 to $4,700 every other year, as well as raising other fees associated with the program, according to a letter Division Director Janey Hovenden sent to midwives July 19.

The move is an effort to reduce a $158,000 deficit for the board of certified direct-entry midwives. Direct-entry midwives are a specific type of midwife that train through apprenticeships, operate outside of hospitals and attend only healthy, low-risk births.

While direct-entry midwives must have clinical experience and be certified in neonatal resuscitation, they are not required to have a university-level education. The board, first created in 1992, oversees the licensing, regulations and education standards of the profession.

The fee increase comes as the five-member board, which oversees 62 direct-entry midwives in Alaska, has struggled to deal with increasing costs spread out over only a small amount of providers.

According to the division, the board is one of 10 to have either increased or recommended fee increases in 2016.

Board member and certified direct-entry midwife Deborah Schneider said the costs of running the board are fairly low — about $40,000 to $50,000 a year — but those costs as well as slow-moving investigations over the years have driven up the deficit.

Only 37 direct-entry midwives currently pay fees, according to the division. Other medical boards can spread their costs over hundreds or thousands of practitioners — nurses pay $165 and psychologists pay $775, for example.

Alaska has one of the highest rates of out-of-hospital births in the nation, according to the Centers for Disease Control and Prevention, accounting for approximately 6 percent of all births in the state. According to data from the Alaska Department of Health and Social Services, 3,490 births in Alaska were attended by a midwife. Of those, 512 were delivered with direct-entry midwives.

Schneider said things that contributed to the current deficit included midwife investigations, some of which continued for up to six years. She said the board also has to pay for investigations into unlicensed midwives, though they have no jurisdiction over those practitioners.

Some midwives in Alaska say the proposed fee increases would have devastating effects on the industry. Lena McGinnis-Kilic, a direct-entry midwife and one of the owners of Heritage Birth Center in Anchorage and Palmer, started a Facebook group Wednesday hoping to get the word out about the proposed increases.

"We want to make sure that (direct-entry) midwifery can continue, which it's not going to be able to at these high license rates," she said. "New midwives won't be able to come in to the field and existing midwives are going to be forced into early retirement or not be able to continue at all."

She noted direct-entry midwives often deliver babies through Medicaid and their low-intervention methods mean they often bill less than what it would cost to deliver a child in a hospital setting. She said similar boards in places like Washington state are subsidized to help keep costs low to midwives.

McGinnis-Kilic said she supports continued operation of the board, but hopes something can be done to ease costs.

"It just starts a domino effect that is going in the negative," she said.

Public comments on the fee change are being accepted through Aug. 22.