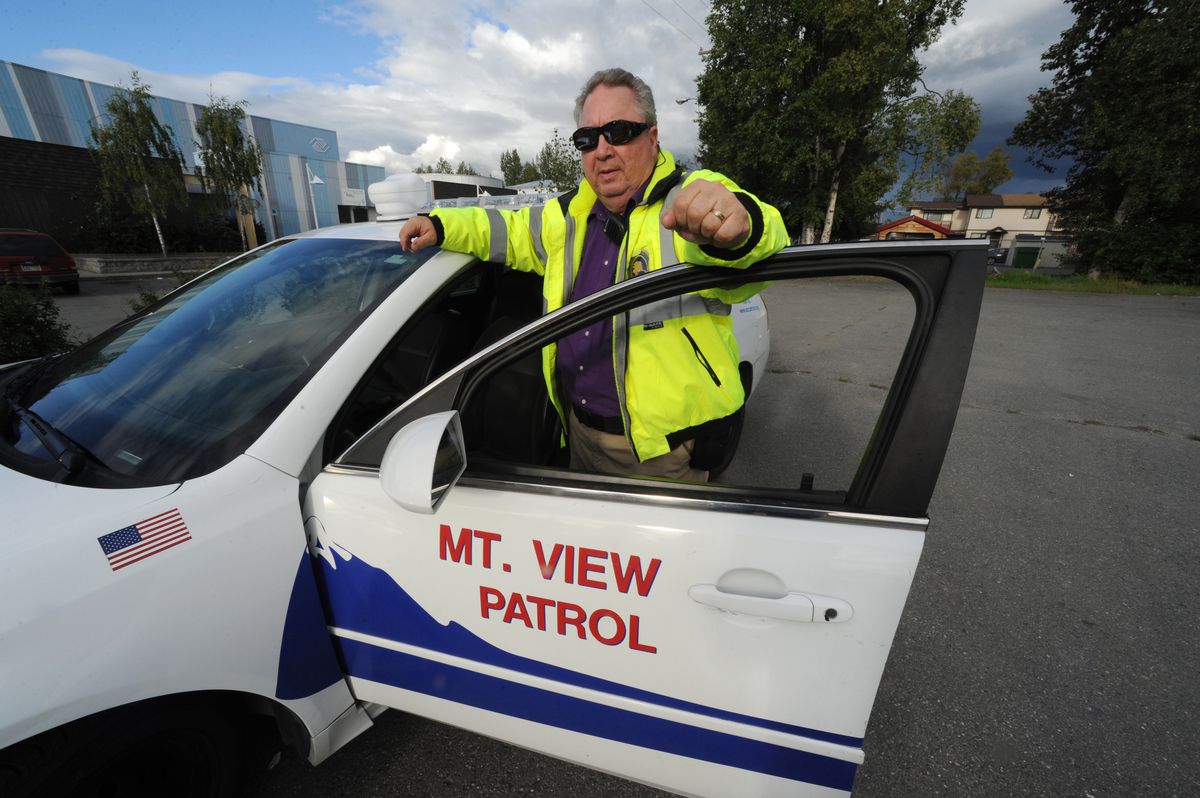 Bob Lincoln of the Mountain View Community Patrol on Thursday, Aug. 18, 2016, who has patrolled the streets of Mountain View on weekends for the past 5 years. (Bill Roth / Alaska Dispatch News)

Bob Lincoln of the Mountain View Community Patrol on Thursday, Aug. 18, 2016, who has patrolled the streets of Mountain View on weekends for the past 5 years. (Bill Roth / Alaska Dispatch News)

Rolling out of the parking lot of Bethel Chapel, a nondenominational church, Deacon Bob Lincoln wears a thin, neon-yellow safety jacket that hides the bulletproof vest as he steers a white 2010 Chevy Impala through the streets of Mountain View, a diverse neighborhood north of the Glenn Highway in Anchorage.

Lincoln's worn the bulletproof vest almost from the beginning of his tenure watching the streets. Years ago, on his first day out on community patrol, he broke up a fight. That same night the red dot of a laser pointer landed on his chest, shining down from a second story window close to the action. Was it a toy? The laser sight from a weapon? It didn't matter. Lincoln wasn't going to take any chances. By Day two, he'd purchased the vest.

Not a police force but far more than the average neighborhood watch, neighborhood community patrols have for decades brought a stabilizing — although sometimes sporadic — presence to grassroots safety movements in Anchorage.

It's a Saturday night, close to 8:30, and Lincoln is taking me on a ride-along.

Kids pass by on bicycles. People walk their dogs and stroll in pairs. Children and some teenagers wave and smile at us. Adults give a look and nod hello. Others carefully watch us pass.

It's unusually quiet. Lincoln — who works as an internal lead technician for GCI during the week — isn't sure why. He doesn't want to jinx it, so he doesn't make too much of it. We swing by tidy yards, a small sidewalk "free library" stand packed with books, vibrant gardens, a mix of new and aging apartments and homes, and pass through alleys littered with abandoned mattresses and couches. At one house, a party is underway.

Lincoln shows me the dilapidated vacant house two young people had broken into the night before. They'd kicked in the door. Lincoln took pictures and got their identification. By the time police arrived, the intruders had run off.

We pass by shrines to fallen children and teens, young people killed by gunfire, at least two of whom Lincoln's family knows personally.

Last winter, he said, he and the other patrols did a lot of what they call "roust or cover" — attending to passed-out inebriates so they don't freeze. The patrols either wake the people up and get them moving or put a blanket on them to keep them warm until help arrives.

On a few nights, the patrols violated their own rules by driving the intoxicated people to the sleep-off center themselves, because community service patrols and police were too overwhelmed to do it within a reasonable amount of time, Lincoln said.

Lincoln's community patrol counterpart in Nunaka Valley is Aaron Pascar. Known in the neighborhood as "Zayde" — the Yiddish word for grandfather — Pascar spent decades as a Boy Scout leader and earned his living maintaining rail cars and their brakes for the Alaska Railroad. In College Gate, it's Liz Patrick, a teacher's assistant who works at the neighborhood elementary school.

All of them have an eye for detail and the out-of-place.

The trio, along with Nunaka Valley's Keith Ferris, form the backbone of the current patrols. They stay in touch by radio and cellphone and back one another up. A group called the Anchorage Coalition of Community Patrols functions as a quasi-parent organization and offers uniformity, equipment and access to grants.

Each patrol responds to its neighborhood's individual needs, but in general, they are mobilized to be the eyes and ears for the police, help with traffic control, find lost children and adults, help with accidents or stranded vehicles and volunteer at schools and community events.

Pascar started the Nunaka patrol in 1995 when gang activity was on the rise and a tunnel connecting his neighborhood to Russian Jack made it easier for people to drift back and forth, bringing with them fights and drug activity.

Lincoln got involved years ago at the behest of a member of the Mountain View Community Council. After enough urging, he gave in.

"I thought I'd give it a whirl for a while and see if I could make a difference," he said. "Once you start patrolling, you don't stop."

Patrick started her patrol nine years ago after a string of vandalism incidents, including car thefts and knocked-over mailboxes. When someone started slashing car tires, enough was enough.

"I was like, 'That's it. I'm doing a community patrol.' I just wanted to be a presence and open up neighbor-to-neighbor talks," Patrick said in an interview last week.

She's often up at 2 in the morning, out on patrol, steering wayward teens back to where they belong. Go on home before you get accused of doing something you didn't do, she tells them. Many are surprised, she said, to learn she knows who they are and where they live.

Once, she barreled through her bushes to interrupt a vehicle break-in next door, something the police later scolded her for, saying it was too dangerous. You never know who you're disturbing and whether they're armed, the police told her.

The patrols try to stay out of harm's way. They'll shine lights on a commotion, keep notes, gently intervene. But if something looks too dangerous, they keep their distance.

Only rarely are they retaliated against. One time after he'd broken up a fight, someone slashed the tires on Lincoln's car and broke the headlamp and windshield.

Patrick has found several lost children and helped the mentally ill stay out of trouble. She's also a gumshoe sleuth with a knack for rooting out vandals.

"I like that Anchorage is the biggest city in the biggest state, but it is a small big city and you really get to have a small-town feel when you get to know your neighbors," Patrick said.

It used to be easier for the patrols to know when they were needed or when to stay out of the way. But the recent encryption of the local police scanner has left them operating in a void.

"We're blind. Since they dropped the scanners out it is difficult to know what the police are responding to," Lincoln said, echoing sentiments also expressed by Pascar and Patrick.

Without the scanner, it's clear the patrols feel weakened in their ability to serve their neighbors and police.

Meantime, they said, somewhat of a workaround has emerged with the Facebook page Anchorage Scanner Joe, where some 30,000 members trade up-to-the-minute information about accidents, suspicious activity, crime, thefts and police activity.

The neighborhood community patrols aren't as robust as they once were, but with more people power, they could be.

"People want to join because there is a problem. But after the problem disappears, they (the volunteers) disappear. They don't realize the importance of being seen all the time," Pascar said.

Led by their individual faith, Pascar, Patrick and Lincoln feel a duty to help during times of need. It's their way to serve and to build community.

But not every volunteer has left with reputation intact. At least one has hurt the very community he'd pledged to protect.

Former patroller Dwight "Sam" O'Connor relished his anti-crime persona and made a name for himself in the 1990s trying to rid Spenard of prostitutes. But in 2011 the would-be hero became the villain, accused of rape, stunning the people who knew him as a solid community activist. Convicted in 2015, he's now serving time at Goose Creek Correctional Center with a release date set for the year 2028, according to online records from the Department of Corrections.

For Patrick, the mission is serious but simple: "proactive vigilance with neighborly hearts."

"We are not glory seekers," Patrick said, explaining that it is "so important to know (a prospective volunteer's) heart."

"There is no place for vigilantes," she said.

"It takes a person who understands that there is more going on in people's lives than what you see when you're on patrol," Lincoln said.

Pascar's approach? Talk to everyone with respect.

"You meet a lot of good people out there. And they appreciate what we do," he said.

"It only takes one person to start a movement," Pascar said.

The views expressed here are the writer’s and are not necessarily endorsed by Alaska Dispatch News, which welcomes a broad range of viewpoints. To submit a piece for consideration, email commentary@alaskadispatch.com. Send submissions shorter than 200 words to letters@alaskadispatch.com or click here to submit via any web browser.