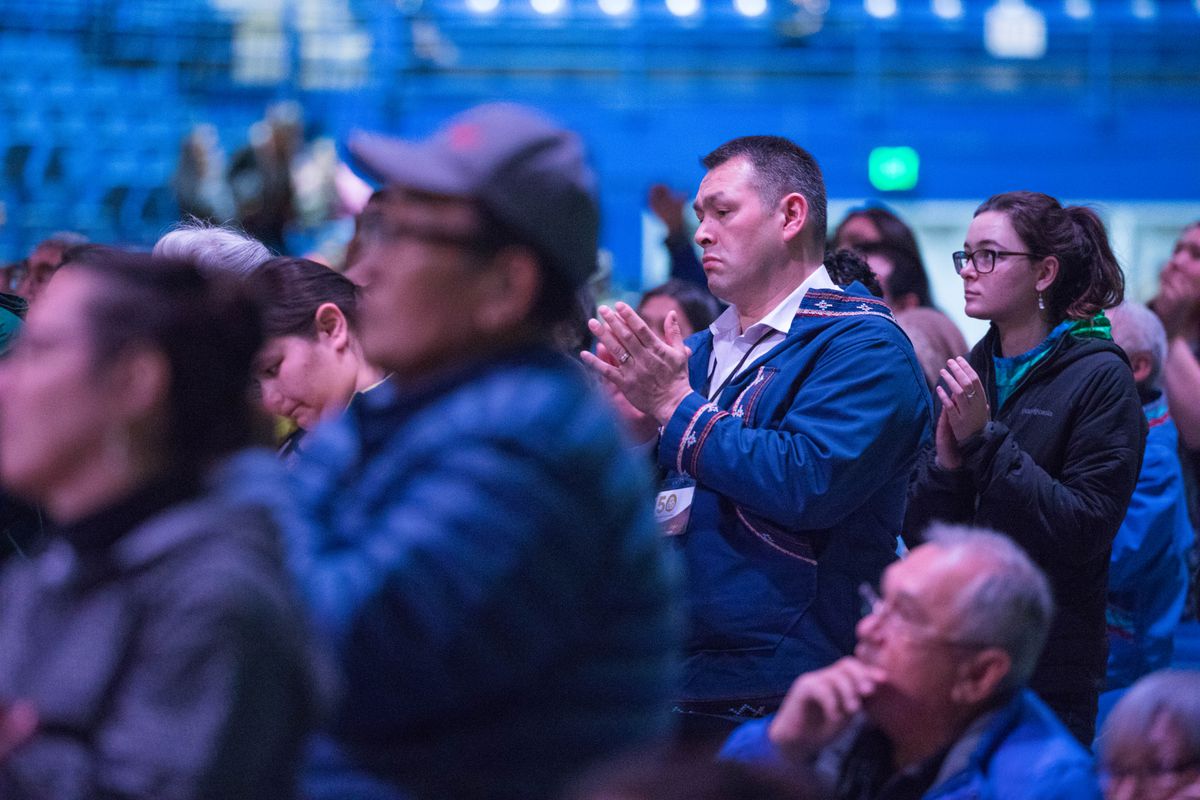 Crawford Patkotak, chairman of the Arctic Slope Regional Corp., applauds after the Presbyterian Church apologized for past abuses made by the church to Alaska Native people, during the Alaska Federation of Natives convention in Fairbanks on Saturday. (Loren Holmes / Alaska Dispatch News)

Crawford Patkotak, chairman of the Arctic Slope Regional Corp., applauds after the Presbyterian Church apologized for past abuses made by the church to Alaska Native people, during the Alaska Federation of Natives convention in Fairbanks on Saturday. (Loren Holmes / Alaska Dispatch News)

FAIRBANKS – For the first time, a church organization has apologized to the Alaska Federation of Natives for its treatment of Native people and especially for abuses in boarding schools.

The Presbyterian Church's national general assembly agreed in June, at the prompting of Alaskans, to issue an apology to all Native Americans abused, mistreated or diminished through church schools and boarding schools or otherwise.

An expression of sorrow for long-ago wrongs was delivered in person at the AFN convention on Saturday by the Rev. Curt Karns, the Anchorage-based executive presbyter – or administrator – of the Presbytery of the Yukon.

"To those individuals who were physically, sexually and emotionally abused as students of the Indian boarding schools in which the (Presbyterian Church USA) was involved, we offer you our most sincere apology. You did nothing wrong; you were and are the victims of evil acts that cannot under any circumstances be justified or excused," Karns told the AFN convention.

The apology was a notable moment on the final day of the convention at the Carlson Center. Delegates also considered some 35 resolutions on everything from Chukchi Sea polar bears to the need for tribal courts to food security — which some village residents said needs to encompass the importance of walrus hunts, reindeer herding and other rural practices.

Fairbanks last hosted AFN in 2013. The convention brought in thousands of delegates who celebrated accomplishments by Native individuals and institutions, listened to speeches by key government officials and took stock of what to get behind next.

They filled hotels and shopped for kuspuks, seal hats and ivory earrings at the AFN arts and craft fair. They danced on stage at Quyana night and spun off for side events including fiddle dances, a Mt. Edgecumbe reunion and an open-mic talent night for young poets, musicians and storytellers called Indigenize It.

In the main hall Saturday, delegates welcomed the apology, standing up and applauding when Karns finished.

"I sure wish that other entities that were so guilty would come forward and do the same, including the U.S. government," AFN co-chairman Jerry Isaac said. The Bureau of Indian Affairs ran a number of boarding schools in Alaska.

Presbyterians ran schools in Cordova, Barrow and Gambell, Karns said in an email. Its missionaries – led by Sheldon Jackson – also ran the boarding school with his name in Sitka and an early boarding school in Wrangell, where the Bureau of Indian Affairs later operated a school of forced assimilation, a place where children reported sexual and physical abuse.

Other religious groups also suppressed the culture and mistreated children, according to historic accounts of early boarding schools.

The Presbyterians were particularly harsh in their rejection of Native languages.

"We should let the old tongues with their superstition and sin die, the sooner the better, and replace these languages with that of Christian civilization, and compel the natives in all our schools to talk English and English only," a Presbyterian missionary named S. Hall Young wrote in the 1880s while trying to set up churches in Southeast Alaska. "Thus we would soon have an intelligent people who would be qualified to be Christian citizens."

"We arrogantly thought that Western European culture and cultural expressions were necessary parts of the gospel of Christ," he told the AFN crowd. "We tried to make you be like us and, in so doing, we helped to diminish the sacred vision that made you who you are. Thus, we demonstrated that we did not fully understand the gospel we were trying to preach."

When Karns left the stage, Joanne Wallis of Eagle was waiting for him. She thanked him and told him she was "a child of survivors of Indian boarding schools."

Her parents were damaged by their years in an Anglican Church boarding school in Dawson City, she said.

"It's all the same," she said later. "It devastated their lives."

Their experience isolated them from religion, and she said it took her years to find her way to church. She is Tlingit, and Episcopalian.

Doreen Simmonds, an elder at Utqiagvik Presbyterian Church in Barrow, traveled with Karns in June to the national general assembly in Portland, Oregon, where they raised the issue. The assembly agreed to apologize to all indigenous people and is working on how to best convey the message, she told the convention.

AFN seemed like the right place to take a first step toward reconciliation, Karns said.

Much of Saturday was spent on resolutions, which highlight issues important to Native people. They considered 35 measures and approved all but one, sending it to a committee for more work.

AFN issued a call to action to work on homelessness. It agreed to support the state's "anti-hunger network" and push for ways to lower the costs of shipping food to villages. That needs to include better ways to acknowledge and handle disasters such as when St. Lawrence Island walrus hunters couldn't get to the animals needed for food, one delegate urged.

Under another measure, AFN agreed to push the state of Alaska to take part in the Kuskokwim River Intertribal Fish Commission, currently a partnership between tribal representatives and the Fish and Wildlife Service.

Delegates put attention on the problem of climate change eroding Native lands. They agreed to seek incentives for clean energy and support reworking a rural energy subsidy known as Power Cost Equalization so that it is not tied to the price of diesel fuel.

AFN also is demanding state help for the Fairbanks Four, who spent 18 years in prison for a killing they say they didn't commit. The four men had agreed not to sue in the deal that won their freedom.

As to the polar bears, delegates debated a hunting quota established through a treaty with Russia. They ultimately agreed to oppose any quota until clear justification is established.