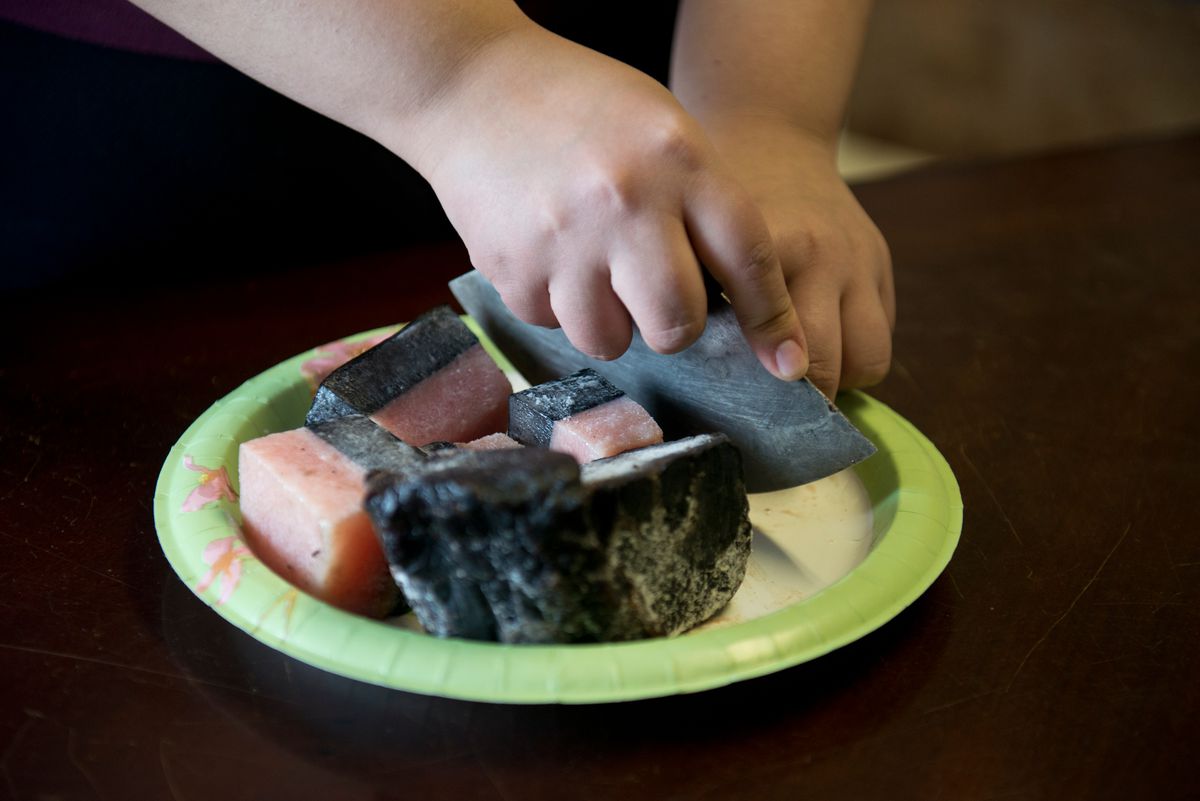 At the Alaska Federation of Natives Convention in Fairbanks last month, Sealaska Heritage Institute presented a study addressing the possibility of changing the definition of "Alaska Native" with regard to taking marine mammals for food or art purposes.

"Determination of Alaska Native Status Under the Marine Mammal Protection Act" was prepared by the institute's maritime anthropologist, Steve J. Langdon, with funding from several Native corporate and nonprofit groups. A news release from the institute said it "brings to light data that might alarm some sectors of the Native community, because findings indicate among other things that the proportion of the Alaska Native population becoming ineligible to hunt marine mammals under current agency enforcement policies is rising at an accelerating rate."

SHI President Rosita Worl was quoted in the press release as warning, "In some communities, especially around the Gulf of Alaska, there may be few individuals eligible to hunt or utilize marine mammals in the not too distant future."

That hypothetical situation might take another hundred years to come about. But in the 21st century, with intermarriage and out-migration an increasing fact of life, it could happen sooner rather than later.

With no eligible individuals to harvest marine mammals for subsistence food and other uses, the amount of ivory, bone and fur media used to create traditional and contemporary Alaska Native art would dry up. In addition, so would the number of people who would be legally allowed to work with such material. That would wipe out one of the unique aspects of the Alaska art market.

Art and craftwork made from marine mammals constitutes a major income source for many rural communities, the study says, noting that for some households it is the "primary means of obtaining cash."

"Marine mammals are an extremely important component of Alaska Native life," especially as a food source, Langdon writes. He cites Alaska Department of Fish and Game numbers that report the statewide average of marine mammal consumption in rural areas to be roughly 40 pounds per person per year. In addition to supplying food, the animals are used to make clothing, tools, family-use items and ceremonial regalia.

"Rich cultural traditions of dance, song, myth, ceremony, and ritual have been created by Alaska Natives as key parts in their expression of identity, heritage, and artistic expression," Langdon writes. "The relationship between Alaska Natives and marine mammals is one of great time depth, deep emotion, and profound integration."

At issue is the long-established, some say antiquated, concept of "blood quantum," the percentage of one's ancestors who are documented as "full-blood" Native Americans. Different federal agencies use different criteria to determine who is an Alaska Native. Applicants to the Bureau of Indian Affairs who can demonstrate Alaska Native ancestry are eligible for services regardless of blood quantum, the press release noted.

However, the Marine Mammal Protection Act uses a different definition, requiring a person to be "¼ degree or more Alaska Indian, Eskimo and/or Aleut blood or who was originally enrolled as an Alaska Native under the Alaska Native Claims Settlement Act" in order to harvest animals including seal, otter, walrus and whale or work with material from those animals.

The study states that the BIA registered "nearly 20,000 Alaska Natives of less than ¼ blood quantum" between 2006 and 2016. "In the coastal regions… the rate of newly enrolled Natives under ¼ blood quantum was nearly 30 percent." And in some regions around the Gulf of Alaska it reached nearly 60 percent.

"The data indicate that the proportion of the Alaska Native population falling below the ¼ blood quantum has been increasing for some time and that descendants of Alaska Natives living in regions in the Gulf of Alaska will be most prone to losing eligibility to hunt marine mammals in the future."

The study also noted that interviews with Alaska Natives revealed diverse opinions about how to address the situation. Some thought it was a good idea and others foresaw "unanticipated and detrimental outcomes."

SHI presented the study to AFN's Subsistence Committee, which requested it after the 2010 convention, without recommending any specific course of action. Worl stressed that the decision of whether to change or keep the status quo would be made by the Native community.