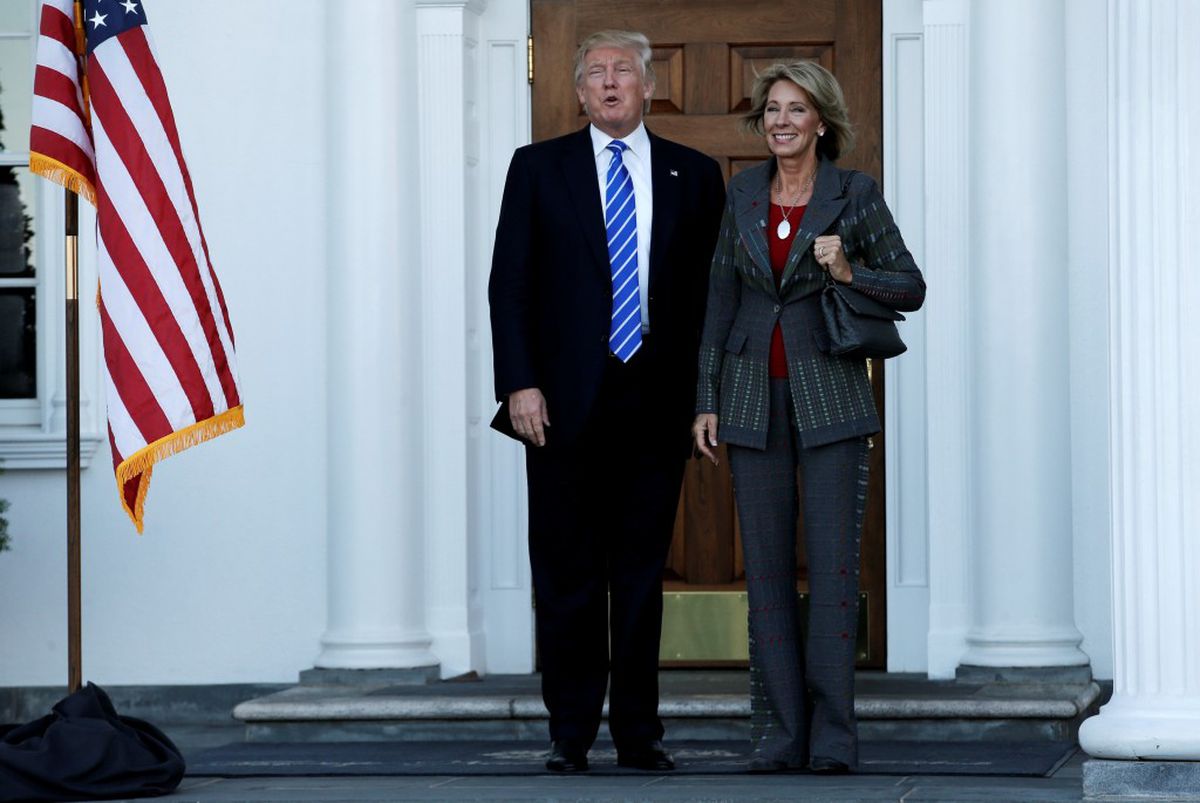 Betsy DeVos is hardly a household name, but the Michigan billionaire and conservative activist has quietly helped change the education landscape in many states, spending millions of dollars in a successful push to expand voucher programs that give families taxpayer dollars to pay for private and religious schools.

Now DeVos is poised to spread her preference for vouchers nationwide. President-elect Donald Trump on Wednesday named her as his nominee for education secretary, a pick that suggests he aims to follow through with campaign promises to expand the movement toward "school choice" – including vouchers and charter schools – in an effort to break up a public education system that he has called "a government-run monopoly."

Trump's pick has intensified what already was a polarized debate about school choice. Advocates for such choice now see in the Trump administration an extraordinary opportunity to advance their cause on a national scale, whereas teachers unions and many Democrats fear an unprecedented and catastrophic attack on public schools, which they see as one of the nation's bedrock civic institutions.

[Trump may be moving toward a more diverse cabinet]

Jim DeMint, president of the conservative Heritage Foundation, cheered DeVos on Wednesday, saying that "the school choice movement will have a champion in the Education Department." American Federation of Teachers President Randi Weingarten said that Trump's pick "makes it loud and clear that his education policy will focus on privatizing, defunding and destroying public education in America."

As a billionaire Republican power broker with no professional experience in schools, DeVos is an unconventional choice to lead the federal education bureaucracy. And while her views on choice are well known, it is unclear how she would lead a department with responsibilities that sprawl from administering student loans to enforcing civil rights in schools.

She has said little about the Common Core, for example, and her ties to organizations that support the K-12 academic standards – including as a board member of the Foundation for Excellence in Education, started by former Florida governor Jeb Bush – raised concern for Trump supporters, who saw her nomination as a sign that the president-elect is wavering on his vehement opposition to the standards.

From her Twitter account Wednesday, DeVos linked to a website where she wrote that she had initially believed in the standards but became disenchanted with them as they "got turned into a federalized boondoggle."

Many Republicans on Capitol Hill are hoping that DeVos will shrink the Education Department's role in public schools and leave more decisions to states and districts.

"Betsy DeVos is an excellent choice," said Sen. Lamar Alexander, R-Tennessee, chairman of the Senate education committee, adding that he expects DeVos to stop President Barack Obama's administration's effort to turn the federal government into a "national school board." Alexander led a recent bipartisan effort to pass the Every Student Succeeds Act, which shifted power to the states.

Sen. Patty Murray, D-Wash., ranking member of the education committee, said she plans to scrutinize DeVos's record and ask her about her qualifications, priorities and plans. Murray also said she would press DeVos to explain — given Trump's statements about immigrants, women, Muslims and other groups — how she "will ensure the safety and respect of all students, of all backgrounds, all across this country."

DeVos, 58, grew up in Michigan, where her father, Edgar Prince, made a fortune supplying auto parts to manufacturers. Her brother is Erik Prince, the founder of Blackwater, one of the most profitable private security firms during the Iraq War. Blackwater came under scrutiny after its guards shot and killed 17 Iraqi civilians in Baghdad in 2007.

She graduated from Calvin College, a Christian liberal arts school in Grand Rapids, and married Dick DeVos Jr., an heir to the Amway direct-sales fortune. Together they founded the Windquest Group, which invests in technology and manufacturing.

They wield powerful influence in Michigan, where she is a former chair of the state GOP, and where he was the Republican nominee for governor in 2006.

They also are major donors to GOP candidates and conservative causes nationwide. During the 2016 cycle, they gave nothing to Democrats and a total of $2.7 million to Republican candidates and political action committees, according to an analysis by the Center for Responsive Politics. The DeVos's also have donated millions of dollars to the arts and to Christian organizations.

But they are perhaps most ardent about their support for school choice, leading a movement to promote vouchers and charter schools for years.

Betsy DeVos founded and serves as chairman of the American Federation of Children and its associated 527 action fund, a platform she has used to support candidates who endorse vouchers and charter schools and to attack candidates who don't.

Three decades ago, there were no state voucher programs. Now, according to the advocacy group EdChoice, about 400,000 children in 29 states are going to private schools with the help of public dollars.

DeVos is working toward a scenario in which "all parents, regardless of their Zip code, have had the opportunity to choose the best educational setting for their children," she told Philanthropy magazine in 2013.

Trump has proposed redirecting $20 billion in federal spending toward a grant program to states for expanding vouchers and charter schools. He has also said he wants to use the bully pulpit of the presidency to persuade states to devote another $110 billion toward vouchers – enough, he has said, for every child living in poverty to have a scholarship of $12,000 toward the school of his or her choice.

Public school advocates fear that redirecting dollars from public to private schools not only weakens public education but also gives taxpayer support to institutions that don't have the same obligation to serve all students – including those in need or who have learning disabilities.

Vouchers also send money to religious schools, a fact that has provoked political resistance and legal challenges. "Americans are always free to send their children to private schools and religious schools, but raiding the public treasury to subsidize private businesses and religious organizations runs against the public trust and the Constitution," said Rabbi Jack Moline, President of Interfaith Alliance, adding that Trump's nomination "suggests he has little regard for … the constitutional principle of separation of church and state."

But proponents say families should be allowed to choose where their children learn.

"We cannot rest as a nation until every kid gets a chance to attend a great school," said Rep. Luke Messer. R-Ind., chairman of the Congressional School Choice Caucus, in a statement hailing DeVos's nomination.

Trump's embrace of DeVos shows a willingness to look outside his circle of loyalists. DeVos donated money to Republican primary contenders Carly Fiorina and Jeb Bush before throwing her support behind Sen. Marco Rubio, R-Fla. She was never an enthusiastic Trump supporter, telling the Washington Examiner in March that she considered him an "interloper" who "does not represent the Republican Party."

She had warmer words for Trump on Wednesday.

"I am honored to work with the President-elect on his vision to make American education great again. The status quo in ed is not acceptable," DeVos tweeted. "Together, we can work to make transformational change to ensure every student has the opportunity to fulfill his or her highest potential."