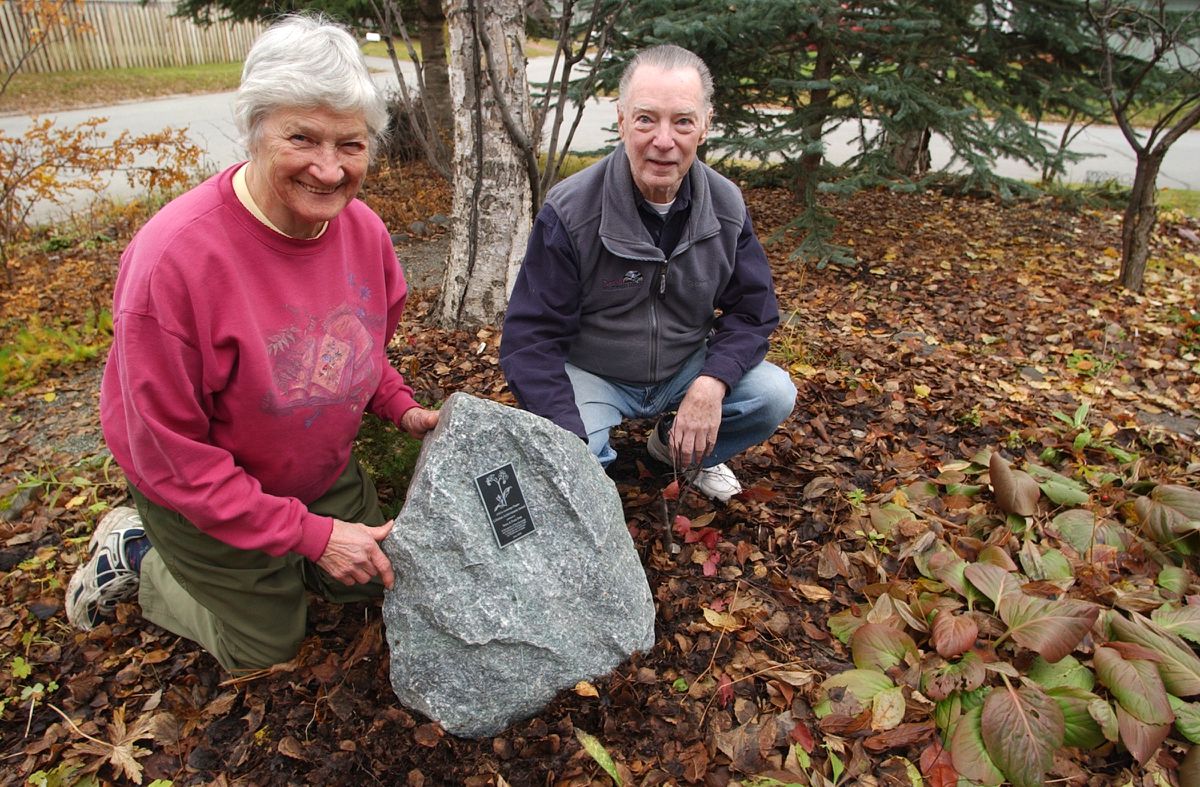 Verna and Frank Pratt were honored by the Anchorage chapter of the Alaska Master Gardeners with a Lifetime Achievement Award for 40 years of teaching and contributions to the understanding of Alaska wildflowers. The Pratts at their East Anchorage home with the award, a large stone just right for the garden, on Wednesday, October 21, 2009. (Fran Durner / ADN archive 2009)

Verna and Frank Pratt were honored by the Anchorage chapter of the Alaska Master Gardeners with a Lifetime Achievement Award for 40 years of teaching and contributions to the understanding of Alaska wildflowers. The Pratts at their East Anchorage home with the award, a large stone just right for the garden, on Wednesday, October 21, 2009. (Fran Durner / ADN archive 2009)

Alaska master gardener Verna E. Pratt died in Anchorage on Sunday, Jan. 8. She was considered a pioneer in popularizing knowledge of native Alaska plants among home gardeners and outdoor recreationalists.

She was the sixth of eight children in a Massachusetts farm family and, from a young age, took a great deal of interest in flowers, both those growing in her mother's garden and those in the fields and woods around her home.

She moved to Alaska in 1966 with her military husband, Frank, who often took photographs of the plants that obsessed his wife. In 1982 the couple founded the Alaska Native Plant Society and Verna served as the group's president until 1988.

Dissatisfied with the hefty, academic, black-and-white texts available at the time, the Pratts collaborated on "Field Guide to Alaskan Wildflowers Commonly Seen Along Highways and Byways," which they self-published in 1989.

With its beautiful color pictures, easy-to-read text, sturdy binding and light weight, the book became a regional hit, selling 25,000 copies within two years. Pratt, a self-educated amateur botanist, organized the book by the color of the plants rather than their scientific nomenclature. Other amateurs found that her system was intuitive and easy to use, particularly when encountering a strange flower in the field.

Several other books followed, including "Wildflowers Along the Alaska Highway" and "Wildflowers of Denali National Park." The books earned her an award from the National Council of State Garden Clubs.

In 1992, Pratt talked to the ADN about how she came by her encyclopedic knowledge through years of observation and assiduous note-taking. "A lot of people say, 'You should get a degree; people would pay more attention,' " she said. "What's the point? So I can say I have a degree? I feel I've worked hard at what I've done and I'm surprised someone with a degree hasn't done it."

Nonetheless, Pratt became a renowned teacher. She led scores of popular hiking tours, identifying wild plants in sites from city parks to remote, steep Alaska mountainsides. She taught classes in the Anchorage Community Schools program and was an adjunct lecturer in the University of Alaska Anchorage's Alaska Wilderness Program. She led field trips at the Murie Science and Learning Center in Denali National Park and at the Portage Visitor Center. She taught at the Alaska Botanical Gardens, in Anchorage public schools and was a featured speaker at the International Rock Garden Plant Conference in Edinburgh, Scotland, in 2001. In 2009 she and Frank were the first people to receive a Lifetime Achievement Award from the Anchorage Chapter of the Alaska Master Gardeners.

Frank Gardner Pratt Jr. died in Anchorage in 2012. Verna was also preceded in death by her daughter, Lynn Frost. She is survived by sons Frank III of Eagle River and DeWayne of Littleton, Colorado, their wives and children.