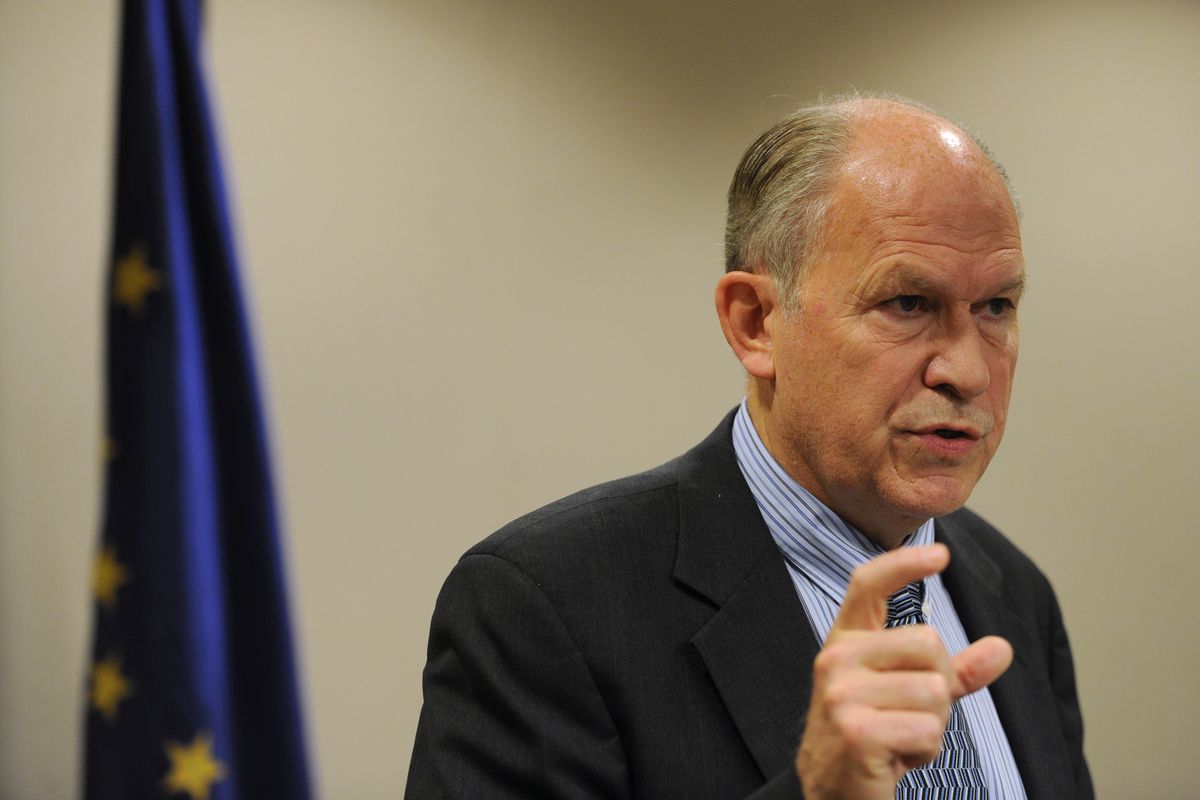 Gov. Bill Walker said the federal wildlife regulations “impact our basic means of survival. Alaskans must be able to provide for their families, and the rules that have been put forward by the federal government do not do that.” (Bill Roth / ADN)

Gov. Bill Walker said the federal wildlife regulations “impact our basic means of survival. Alaskans must be able to provide for their families, and the rules that have been put forward by the federal government do not do that.” (Bill Roth / ADN)

A festering disagreement between state and federal officials over hunting methods on national wildlife refuges and preserves deepened Friday when the state filed a lawsuit challenging the authority of the National Park Service and the U.S. Fish and Wildlife Service to ban certain practices.

Among the methods park service officials banned on federal land:

* Taking wolves and coyotes (including pups) during the animals' denning season.

* Shooting swimming caribou, a practice primarily used in the Noatak National Preserve in Northwest Alaska. Currently, state law prohibits taking big game that is swimming, but hunters may shoot a swimming caribou from a boat under power, and hunters can also shoot a caribou that has emerged from the water on the shoreline while the hunter is still in a moving boat. The new park service regulations will no longer recognize those exceptions on preserves.

In addition, Fish and Wildlife this summer imposed strict limits on predator control to its 77 million acres of national refuge land in Alaska, prohibiting:

* Killing cubs or sows with cubs or brown bears over bait;

* Using snares or traps on bears;

* Killing wolves or coyote from May through Aug. 9 and,

* Taking bears from an aircraft the same day air travel has occurred.

"Our primary purpose in Alaska is to conserve the natural diversity of predators," Mitch Ellis, chief of refuges for the agency's Alaska region, said at the time. "Managing predators to scarcity is inconsistent with that mandate."

The state contends the prohibitions are particularly damaging to subsistence hunters while unlawfully usurping the state's authority to manage wildlife within its borders.

"As Alaskans, we have a unique relationship with our land — especially in the most rural parts of the state where our residents rely on hunting and fishing to put food on the table," Gov. Bill Walker said in a press release. "These regulations impact our basic means of survival. Alaskans must be able to provide for their families, and the rules that have been put forward by the federal government do not do that."

The state was to maintain management over wildlife on those lands but things got complicated because the action provided rural Alaska residents special hunting privileges on federal lands.

Subsistence hunting is the hunting done by rural residents. They can hunt in both preserves and parks. Other Alaska hunters wishing to hunt on federal land, along with sport hunters from outside Alaska, are allowed only in preserves, which make up about 38 percent of the 54 million acres of land managed by the park service in Alaska. Preserve hunting generally occurs under state regulations.

Neither state nor federal officials claim that any wildlife populations taken by the methods federal officials find objectionable are at risk, even though both the Central Arctic and Western Arctic caribou herds are in a deep slide.

For years, state biologists have been entrusted with managing wildlife populations that roam across federal, state and local land.

"These federal regulations are not about predator control or protecting the state's wildlife numbers," state Attorney General Jahna Lindemuth said in a press release. "These regulations are about the federal government trying to control Alaskans' way of life."

However, Alaska regional park service director Bert Frost two years ago said the restrictions simply codify "long-standing prohibitions for wildlife harvest seasons and methods that were traditionally illegal under state law, but in recent years have been authorized by the state of Alaska in an effort to drive down predator populations and boost game species."

"This rule does nothing to restrict or limit federal subsistence hunting on NPS-managed lands," Frost noted at the time. "It would make permanent the small number of temporary restrictions we have put in place annually for the past four years, and largely maintain the status quo."

But Sam Cotton, commissioner of the Alaska Department of Fish and Game, disagrees: "To preserve the ability to hunt for future generations, state officials need the flexibility to manage wildlife populations. These regulations remove that flexibility."