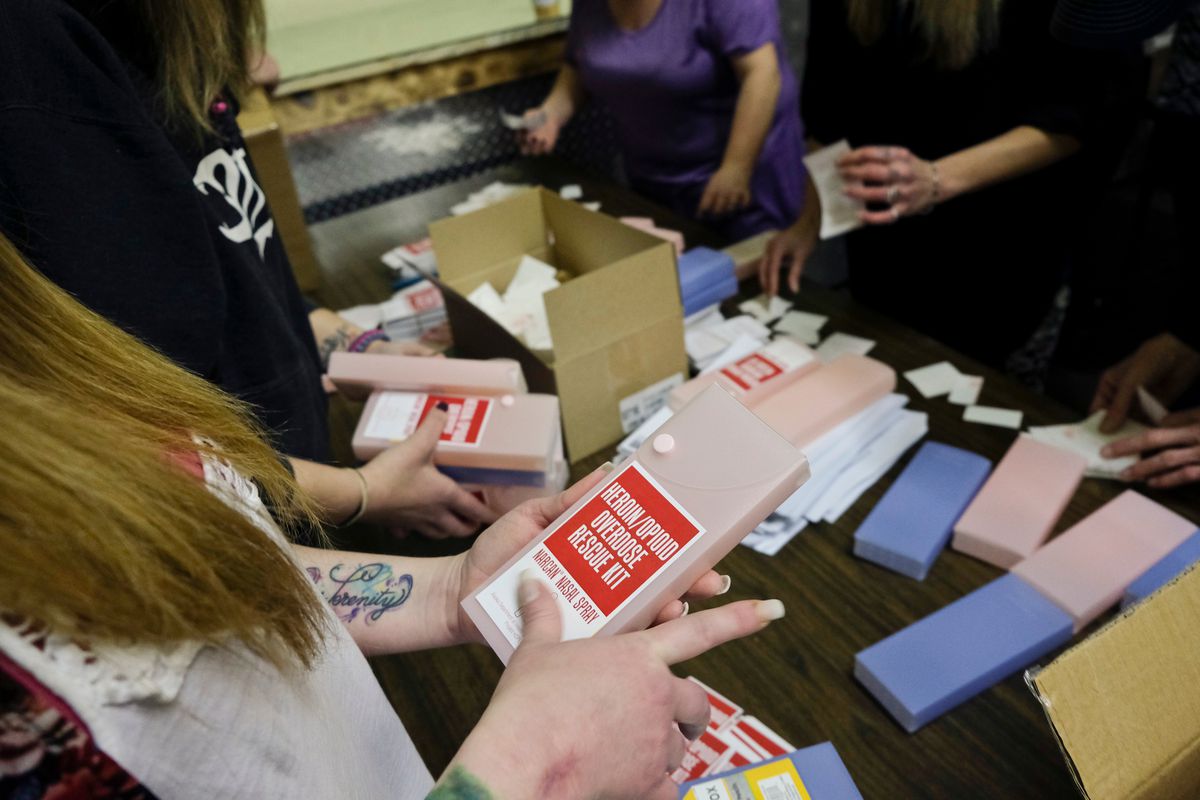 In the storage room of a Wasilla boutique, 35 volunteers worked a makeshift assembly line Thursday, putting together kits to fight heroin overdose and hoping to save lives. Much of the work was done by people recovering from drug addiction.

The crew assembled 1,500 rescue kits, each with nasal spray doses of the drug naloxone, known by the brand name Narcan, which reverses the effect of opioids. Getting the rescue drug into the hands of the people closest to the addicts at risk is an ongoing project run by the state's Department of Health and Social Services.

Andy Jones, who oversees Health Emergency Response Operations and EMS for the Division of Public Health, said 5,000 kits will be distributed in Alaska this year, the first in a five-year project funded by a $4.2 million federal grant from the Substance Abuse and Mental Health Services Administration. Next year, they hope to distribute 6,000 kits.

To do that, the state is partnering with community groups and nonprofits that see the effects of the opioid epidemic every day. In Wasilla, Fiend 2 Clean, a peer support group, helped rally the volunteers. MyHouse, a homeless youth drop-in center that also operates the boutique, provided the work space. Both groups will also help distribute the kits. Other groups will participate in Anchorage, Juneau, the Bristol Bay region, the eastern Aleutian islands and elsewhere.

"The reason for that is they have the closest connection to the people … who are either in recovery or who are maybe still using," Jones said.

Last year, the Alaska Legislature passed a law designed to increase access to naloxone, allowing pharmacists to distribute the drug without a doctor's prescription. That paved the way for the state's distribution program as well, Jones said.

In the last couple of months, some pharmacies have also begun offering the drug to walk-in customers. Fred Meyer pharmacy on Northern Lights Boulevard in Anchorage offers the drug at $150 per two-dose pack.

['It can happen to anyone': Director of Bean's Cafe confronts son's suspected overdose death]

Each Heroin/Opioid Overdose Rescue Kit contains two naloxone nasal spray doses, a quick guide to the signs of overdose and how to administer the drug, a pair of protective gloves and a CPR barrier device. It comes packed in a pencil case with a snap enclosure.

Karl Soderstrom, a Fiend 2 Clean founder and recovering addict, likened naloxone to an automatic external defibrillator in its ability to make a difference in a medical crisis.

Ninety-one Americans die each day from an opioid overdose, according to the Centers for Disease Control and Prevention. In Alaska, 110 people died in 2016 from overdoses, according to a preliminary count, Jones said.

Lisa Behrens, EMS deputy director for the Matanuska-Susitna Borough, said getting the drug in the hands of more people is helpful, as long as the drug is properly administered and usage is followed up with emergency medical care. Valley medics have carried naloxone for decades, but the frequency of its use has increased dramatically in recent years, she said.

In 2007, Mat-Su medics responded to 80 calls that it classified as either overdoses or poisoning, Behrens said. Last year, they responded to 270 such calls. Since just 2013, the borough has tripled what it has spent to equip itself with naloxone.

Soderstrom estimated that half of the volunteers assembling kits in the Wasilla thrift store Thursday were addicts in recovery.

One of them, Sarah Hildebrand, stood shoulder to shoulder with the other volunteers, unboxing the doses, applying stickers and including instructions on using the drug that once saved her life, she said.

Hildebrand recalled a night in 2008 that she lost consciousness while using heroin with others in a Wasilla apartment.

"I'm lucky they called 911, because when there's drugs involved it's definitely not the easiest thing to do," she said.

Hildebrand remembers she was drenched when she was revived. Friends had tried to revive her with a cold shower before medics took over. She refused to go to the hospital at first, but an EMT explained how serious her overdose had been. Later, she refused treatment at the hospital, decisions that she called part of the insanity of addiction.

Now, more than two years sober, she said volunteering and engaging, both with other addicts and other community members, helps in her recovery. She works as a peer support specialist with Fiend 2 Clean.

[Alaska's heroin problem brings together state, local and federal leaders in search of a solution]

"We all share a common bond, and it's just important for us to stay connected," she said.

Jones calls naloxone a tourniquet — a first step. That step must be followed by a 911 call, and then people need to follow dispatcher instructions until help arrives to maximize the chance of preventing a death. He added that helping an addict survive is just a first step in making a difference in Alaska's opioid epidemic.

"Narcan is very much needed. It's giving everybody that second chance, but we need to make sure we work on the systems behind it. Meaning, building our recovery peer-support services, building up the treatment services, building a pathway to recovery for people who are actually seeking that," he said.

"So that's really the hard work we're going to have to do here in the coming years."

Jones said that people interested in getting an overdose rescue kit should send a request to projecthope@alaska.gov for more information.