Search continues for Bering Sea fishing vessel missing with 6 aboard 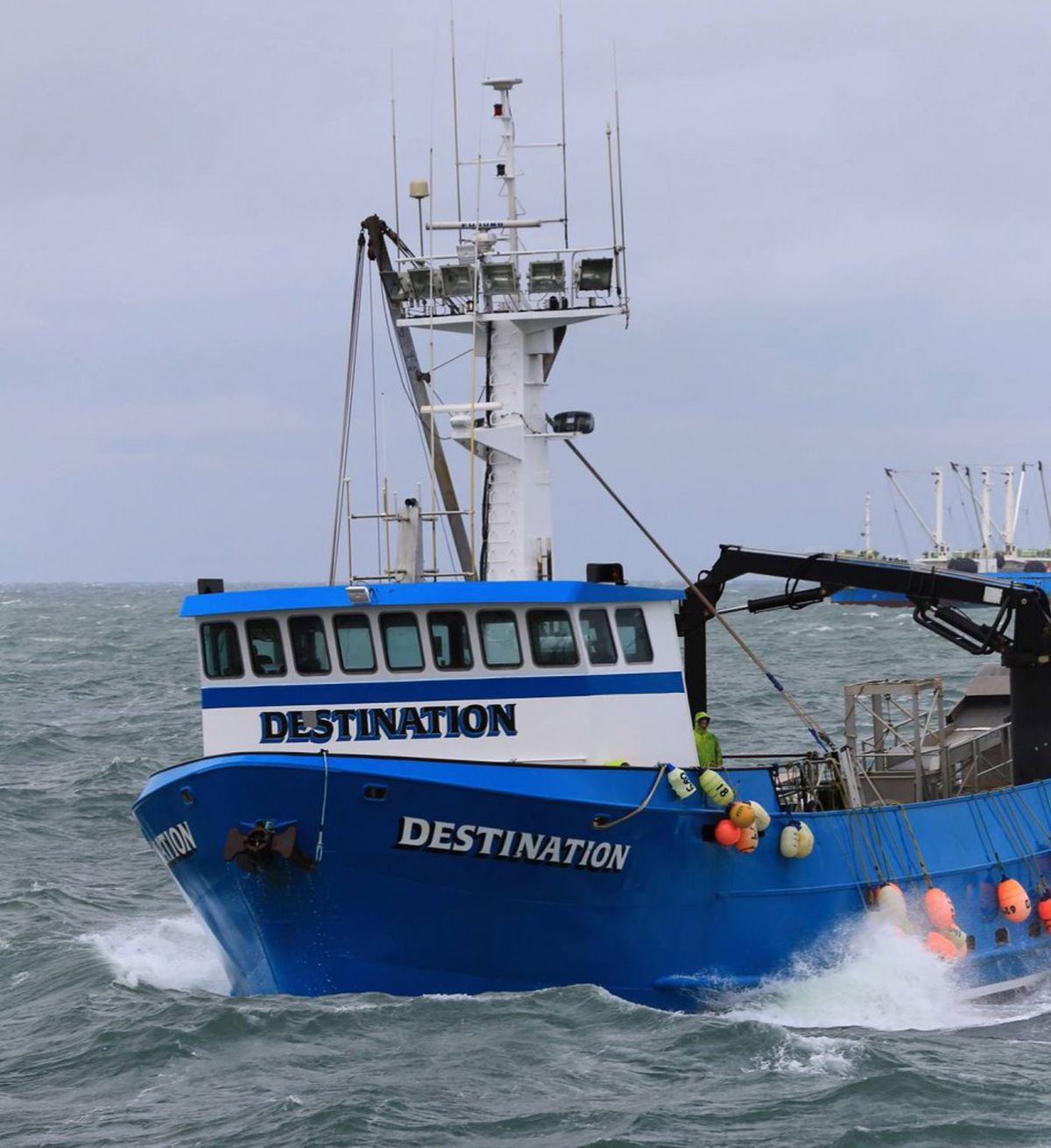 The search continues on Sunday, Feb. 12, 2017, for the 92-foot fishing vessel Destination with six people aboard missing in the Bering Sea. The Destination sent out an emergency beacon on Saturday morning from a position about 2 miles northwest of St. George Island. (Jack Molan Photography)

The search continues on Sunday, Feb. 12, 2017, for the 92-foot fishing vessel Destination with six people aboard missing in the Bering Sea. The Destination sent out an emergency beacon on Saturday morning from a position about 2 miles northwest of St. George Island. (Jack Molan Photography)

Update, 11 a.m. Monday: The U.S. Coast Guard continued to search the area around St. George for any sign of the missing fishing vessel Destination and its six-man crew Monday, said U.S. Coast Guard Petty Officer 3rd Class Lauren Steenson. The cutter Morgenthau was still on scene as of 11 a.m. Monday, and there were plans to launch a HC-130 Hercules plane by afternoon, Steenson said. No additional debris has been seen, she said.

Original story: Despite two days of searching, there was still no sign Sunday night of the Bering Sea crab boat or its six crew members that went missing just off St. George Island Saturday.

The Destination, a 95-foot fishing vessel based in Seattle but operated mostly out of Sand Point, was on its way from Dutch Harbor to St. Paul Island for the start of the opilio crab fishery when the ship's emergency beacon activated at 6:11 a.m. Saturday, said Michael Barcott, an Anchorage maritime attorney who is acting as a spokesperson for the ship's ownership group. 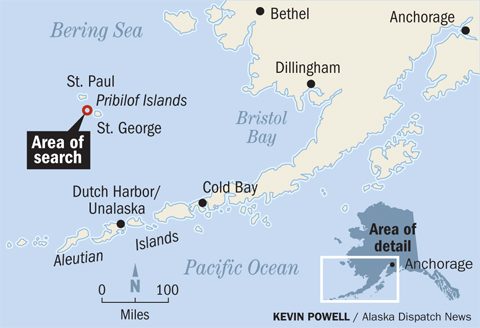 On Saturday, a Coast Guard search and rescue crew found the emergency beacon, a life ring, buoys and tarps in a small oil sheen on the water about 2 miles northwest of St. George Island.

"The crew had sailed right by St. George within a half-hour of when the beacon activated," Barcott said.

By Sunday morning, the 378-foot Coast Guard cutter Morgenthau had arrived from Dutch Harbor, where it was being used for law enforcement during the winter commercial fishing season. The ship will offer "a view from the water rather than up above" during the search effort, Steenson said.

The Morgenthau also brought with it another helicopter to help in the search. On St. George, people were also "patrolling the shoreline for any signs of the crew or vessel," Steenson wrote.

There have been no other sightings of debris connected with the vessel, she said.

The Destination was built in the 1980s and is owned by a corporation, with David R. Wilson as the principal shareholder, Barcott said. A 1987 New York Times article referred to Wilson as a lifelong fisherman and co-owner of the Destination with his half-brother. It said both were born in Unga, just west of Sand Point.
The ship has primarily been a crabber in the winter and a tender during the summer salmon season in Alaska, Barcott said.

Dylan Hatfield, a fisherman from Petersburg who has been working out of Dutch Harbor this winter, said his brother was aboard the Destination when it went missing.

Hatfield did not want to identify his brother or any of the other crew members on the Destination by name on Sunday.

Officials have not released the identities of the men, who are considered missing.
But Hatfield said he had worked with every member of the six-man crew and knew them to have deep experience — some had been crabbing in the Bering Sea for 20 or 30 years. They were professionals who did not take unnecessary risks, Hatfield said.

The ship itself was a meticulously maintained "battle ax," said Hatfield, who worked for six years aboard the Destination himself.

"Everybody I've talked to, nobody can believe of all the boats that this one went down," Hatfield said.

Hatfield says he thinks the boat may have rolled. What may have caused that — flooding, icing conditions or something else — may never be known, he said.

"Whatever happened, it happened fast, to not get a mayday out," Hatfield said.

Sea spray icing is a serious danger for fishing boats, according to the National Oceanic and Atmospheric Administration: Too much ice can lead to "capsizing, extreme rolling and/or pitching, and topside flooding can occur as a result of the loss of stability and extra weight from the ice burden."

The Coast Guard has not said what they believe happened to the ship.

Casey McManus, known as the captain of the Cornelia Marie fishing vessel made famous by the Discovery reality show "Deadliest Catch," was aboard his own ship about 80 miles northwest of St. George on Saturday.

McManus said in a phone interview from his ship Sunday that he heard no mayday call from the Destination, which he described as a "well-maintained, class-A operation."

It was cold on the night before the Destination's emergency beacon was activated, with choppy seas, McManus said.

"We built ice on the bow that night. About 3 inches of ice," he said. "It wasn't the biggest seas ever, but they were steep and close together. You get a lot of spray."

There was a heavy freezing spray warning active on Friday and Saturday for the nearshore waters of the Pribilof Islands, including St. George, according to the National Weather Service.

When heavy winds and below-freezing temperatures combine, "anything that blows off the ocean is going to freeze instantly onto the boats," said meteorologist Rebecca Duell with the service's Anchorage forecasting office. The condition is common in the Bering Sea during the winter months.

The Destination is part of the Bering Sea fleet — much of it based in Washington state — that pursues king and snow crab with baited steel traps known as pots that are set along the bottom.

The fleet's safety record has improved dramatically from decades past, when crews competed in derby-style harvests where they rushed to claim as much crab as possible before an overall quota was reached.

During the 1990s, 73 crew members died in the Bering Sea crab harvests, according to research by the National Institute of Occupational Safety and Health. Crews in that era carried as many pots as possible to quickly trap the crab, and vessel overloading was a significant cause of disaster, according to federal research by the institute.

But the fishery underwent a major change in 2005 as the derbies were replaced with a new system that divided up the harvests among crab-boat owners' quotas between vessels. The fleet size shrank, and the crews who continued to crab work through longer seasons in which they are not in competition with one another.

A NIOSH study that tracked crab harvests from 2005 through 2013 found that 65 injuries were reported through those years. But only one was fatal; it occurred in 2009 when a crew member was pulled overboard by a line that tightened around his lower leg.

On Sunday night, the search for the Destination and its crew was still underway.
Hatfield, the fisherman and brother of one of the crew members, said he would be taking a break from working on the Bering Sea.

"It's something that gets in your blood, you know," he said. "We all know the consequences. It's in the back of everybody's mind. You never think it's gonna happen to you."

Information from The Seattle Times was used in this report.