Violent crime up in Alaska over past 30 years, even as overall crime rate fell

Over the past 30 years, Alaska's violent crime rate has risen even as the state's overall crime rate fell, according to a new data analysis from a University of Alaska researcher. 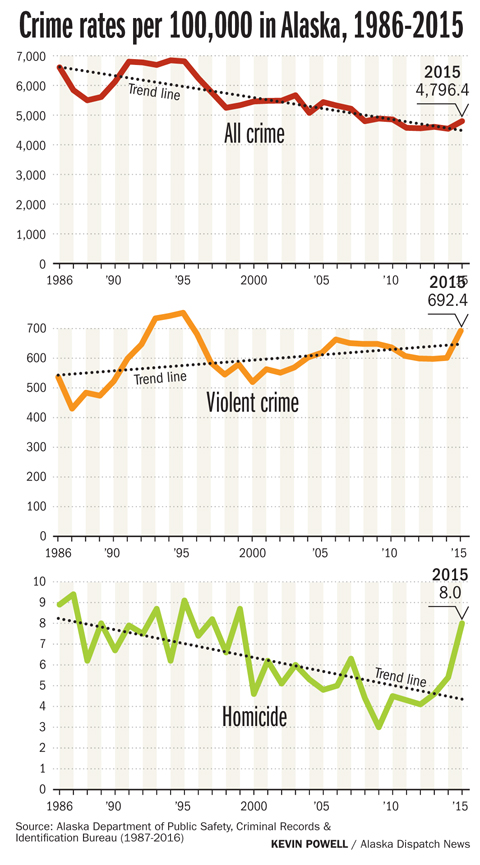 The analysis found that on a per capita basis, statewide robbery rates have decreased over the past 30 years — but only slightly. Per capita homicide rates have also fallen over the past three decades, despite a sharp uptick starting in 2014.

The data analyzed did not include 2016, when Anchorage, Alaska's biggest city,  recorded 34 homicides.

But rates of rape and aggravated assault have increased in Alaska.

Aggravated assault, defined for the study "as an unlawful attack by one person upon another for the purpose of inflicting severe or aggravated bodily injury," made up 71 percent of all violent crimes reported in Alaska from 1986 through 2015. 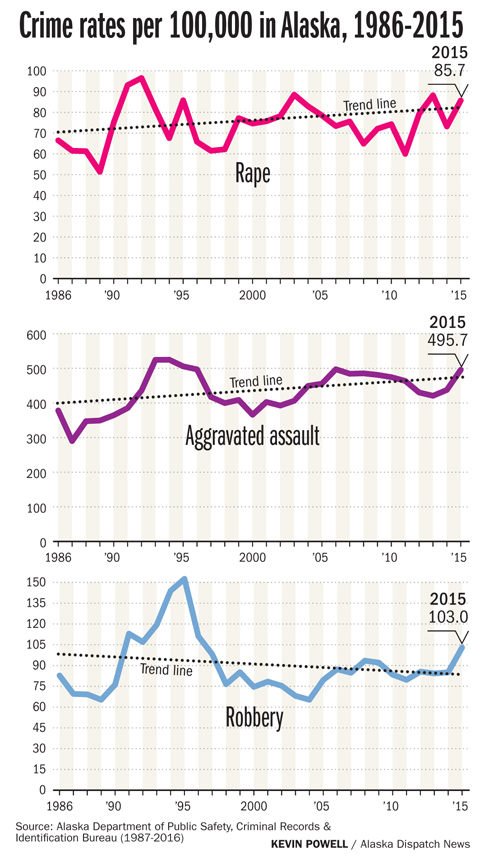 The overall crime rate, which factors in non-violent crimes, has fallen. Property crimes — defined as burglaries, larceny-thefts and vehicle thefts — have declined over time, according to a UAA fact sheet released earlier in February.

The report doesn't provide any answers about why violent assaults have increased in Alaska, or the geographic distribution of such reports, which rely on data submitted by law enforcement agencies to the Alaska Department of Public Safety.

"It helps us see where we have our issues and where we should be focusing our efforts," said Parker.

Garry Gilliam, the deputy chief of the Anchorage Police Department, said he couldn't draw conclusions about whether the statewide statistics reflected the situation in Anchorage without looking at departmental data.

He cautioned that the FBI's Uniform Crime Reporting data has limitations, particularly in definitions of terms like "aggravated assault" developed decades ago.

Gilliam said that the Anchorage Police Department wants to move to a more detailed — but more labor-intensive and expensive — method of tracking crime statistics to get a better picture of the types of crimes committed, at least in Anchorage.

"When you start asking questions why is that happening, it gets a little more difficult to answer those questions," he said. "That's why we want a better data analysis system."

OPINION: We have the solution to turn Alaska around. We always did.