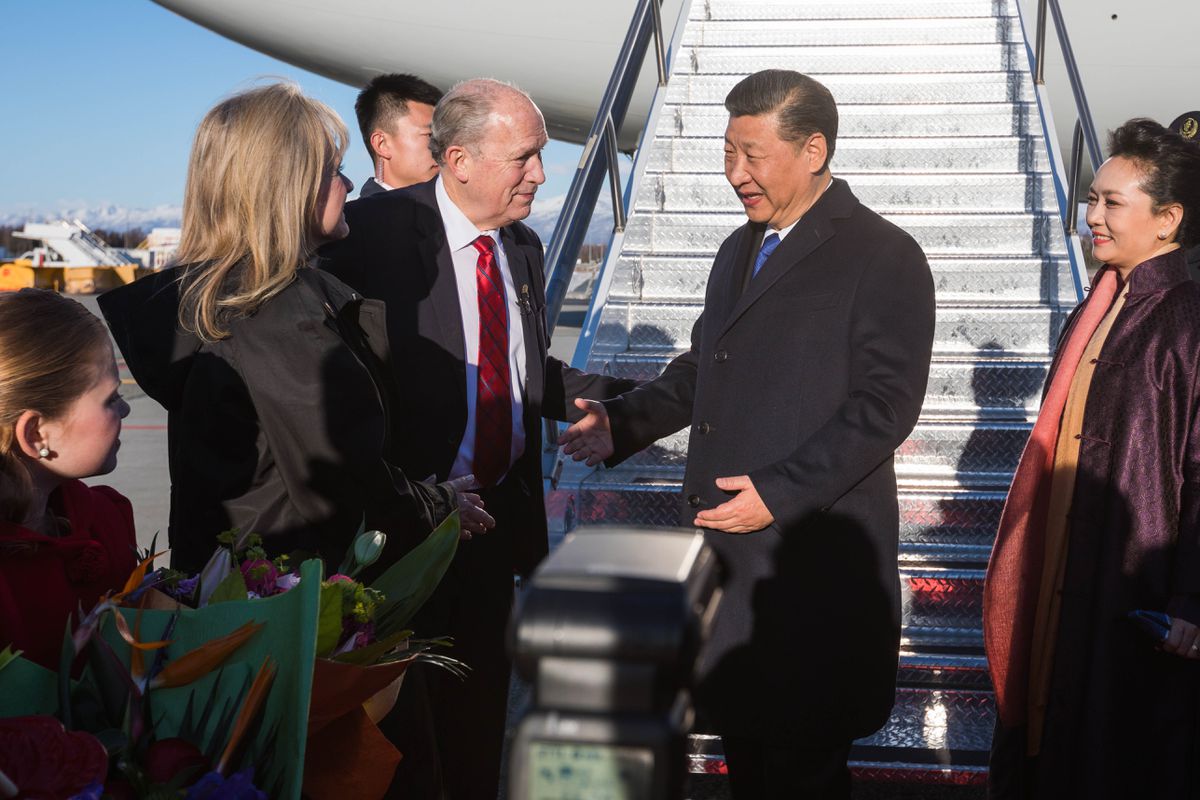 Chinese President Xi Jinping made a surprise visit to Alaska on Friday evening, catching a seafood dinner in Anchorage, meeting with Gov. Bill Walker, and taking in a sightseeing moment in Turnagain Arm before returning to the sky again in his Boeing 747 for the journey back to Beijing.

Xi's rest stop in Anchorage broke up his trip home following meetings with President Donald Trump at Trump's Mar-a-Lago country club in Florida and an earlier visit to Finland.

The Alaska stop underscored the significance of the Arctic to China's long-term economic interests. For the Alaskans, trade and one of the governor's pet causes — a liquefied natural gas export project aimed at Asian markets — was at the top of the agenda.

An Asian head of state stopping to refuel in Alaska on a return trip from the Lower 48 is not particularly remarkable. But Xi, celebrity first lady Peng Liyuan and more than a dozen officials took the unusual step of motorcading from Ted Stevens Anchorage International Airport to spend several hours in Anchorage.

Xi's plane, a modified Air China 747-400, landed in Anchorage at 6:45 p.m. With a few hours of daylight to spare, the itinerary for the Chinese leader and his entourage included a drive down the Seward Highway to Beluga Point, the scenic lookout along Turnagain Arm where authorities on Friday were still searching for a man who fired a series of gunshots before inexplicably disappearing.

Xi's 24-vehicle motorcade left the airport at 7:12 p.m. The motorcade included SUVs, vans and an ambulance and dozens of guests. Some of the vehicles had lights flashing.

The entourage reached Beluga Point about 7:35 p.m. A swarm of people from the motorcade got out to gawk at the beautiful scenery, then got back in their vehicles, turned around, and returned to Anchorage about 7:50 p.m.

Earlier in the day, authorities announced the Seward Highway would be shut down in both directions between 7 and 7:30 p.m. The shutdown was announced by the Anchorage Police Department and Alaska State Troopers as only a mysterious "event," which had the uninformed guessing madly about what was up. The two entrances to the Beluga Point turnout was closed with traffic cones at 6:20 p.m., with troopers ordering everyone, including reporters and news photographers, to leave.

Two well-dressed Asian men wearing earpieces and smoking cigarettes walked around the turnout. One of the men told a reporter he didn't speak English.

The weather was nearly perfect for tourism, with the temperature about 40 degrees and the sky mostly blue and sunny.

At the Hotel Captain Cook, Walker and Xi held a brief session in public, a slightly longer private meeting and then had dinner at the top-floor Crow's Nest featuring Alaska seafood — Kachemak Bay oysters with honeydew, crab bisque and Alaska king salmon.

With dinner over, Xi, his wife and his entourage returned to the motorcade and got back to the airport after 10 p.m. Their 747 took off at 10:47 p.m.

The governor used his brief time with Xi to make a strong pitch for the gas export project and acknowledged China's status as the state's largest trade partner. Xi assured Walker that China's government is paying close attention to trade and liquefied natural gas resources in Alaska.
Xi, who had never been to Alaska, said he has flown over the state many times and has always wanted to visit.

"He called it a mythical, almost mystical place for the Chinese, like a Shangri-La," said Grace Jang, spokeswoman for the governor.

The Chinese government notified Walker's office last month that Xi would be flying through Anchorage and requested a meeting between the Chinese president and the governor, according to a statement from Walker's office.

Unlike Xi's visit to Mar-a-Lago, which was widely publicized well in advance of his arrival, his Alaska stop was kept under wraps until earlier this week. Media outlets needing security credentials were asked to maintain an embargo on the story until the wheels of Xi's plane touched down. The Chinese government, which is famously press-averse, requested that even the reason for secrecy be kept confidential, Jang said.

Like the United States, China is aggressive about securing natural resources to fuel its economy. In recent years, it has eclipsed neighbor Japan as Alaska's largest trading partner. The state exported seafood, minerals, oil and other products valued at just under $1.2 billion to China in 2016.

The Chinese government released no explanation for the stop in Alaska, but the country has been frank about its interest in Arctic affairs and the region's economic promise as melting sea ice exposes new shipping routes, fishing grounds and rich deposits of oil, gas and minerals. China is an observer nation to the Arctic Council, a diplomatic body chaired by the United States until next month, when Finland takes over the rotating chairmanship.

In Finland, Xi vowed to enhance the two countries' cooperation in Arctic affairs, according to Reuters, and engaged in some "Panda Diplomacy," agreeing to send a pair of the country's telegenic national megafauna to Finland.

"China goes to considerable lengths to demonstrate its connection with the Arctic," said John Higgenbotham, a senior fellow at both Carleton University and the Centre for International Governance Innovation in Ontario, Canada. "It calls the Tibetan Plateau the world's 'Third Pole' and refers to itself as a 'near-Arctic country.' "

China pushed hard for observer status on the Arctic Council, an international forum devoted to regional governance, economics, science and other issues. Observers are not allowed into the closed-door meetings of the eight Arctic countries that form the council's core membership, but they do have a chance to make their views known. China also participates in scientific research throughout the Arctic and recently commissioned its second ice-breaking vessel.

The last prominent head of state to visit Alaska was President Barack Obama in August 2015. His administration sought to use Alaska as a backdrop to draw attention to climate change, one of his administration's signature issues. The Chinese government had also been partnering with the Obama administration on curbing emissions of greenhouse gases blamed for climate change.

The Alaska stop fulfills other goals for Xi's domestic political agenda. As he faces a Party Congress, where his political faction of the Chinese Community Party faces challenges, the stop gives Xi an opportunity to present himself as a forward-looking, economically innovative leader and highlight China's omnipresence in world affairs.

"China is becoming more and more influential in different ways and has great resources and the will to become a multidimensional superpower," Higgenbotham said. "Being active in the Arctic is very important to them."