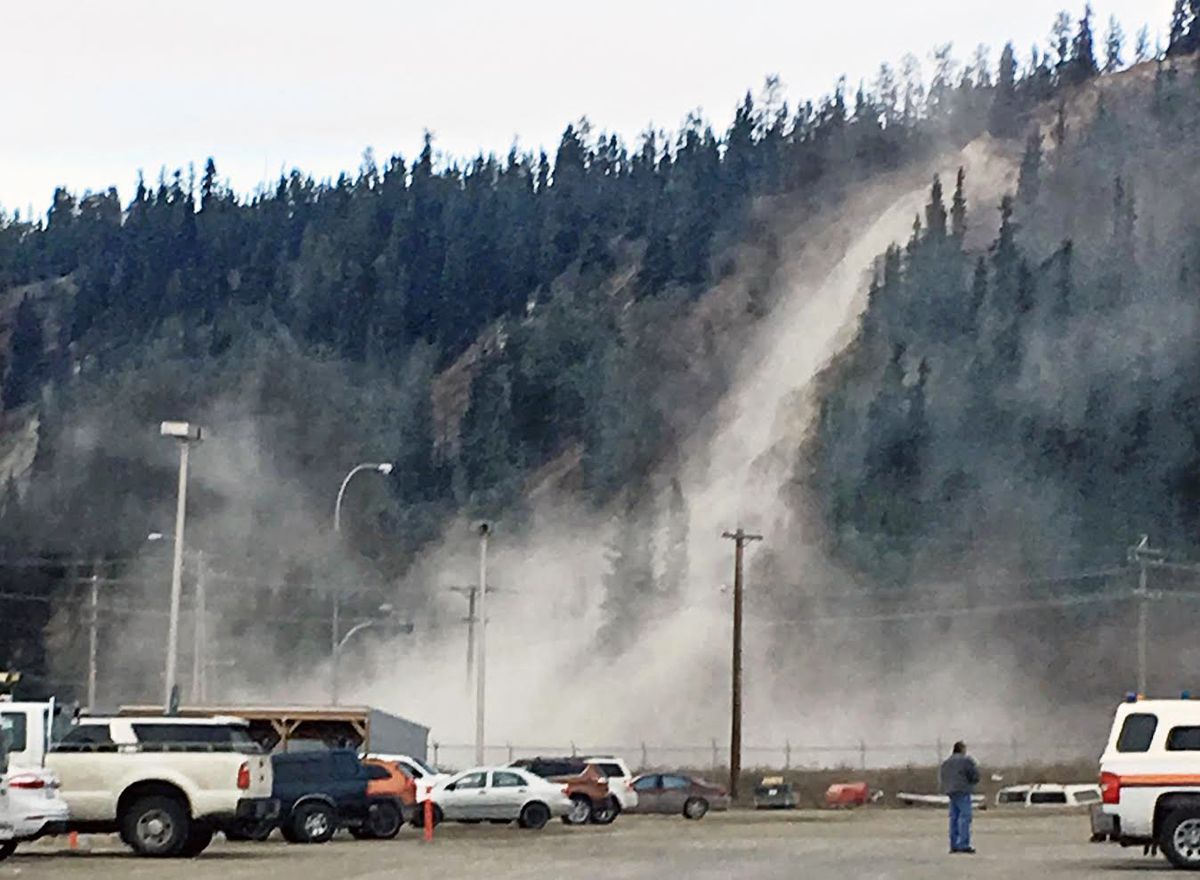 Dirt rolls down a bluff during an earthquake May 1, 2017, near downtown Whitehorse, Yukon. (Angie Dickson / via Yukon News)

Dirt rolls down a bluff during an earthquake May 1, 2017, near downtown Whitehorse, Yukon. (Angie Dickson / via Yukon News)

A series of strong earthquakes centered just across the Canadian border from Southeast Alaska early Monday woke residents from Haines to Petersburg and also gave solid shakes to Whitehorse, Yukon.

The first quake, with a preliminary magnitude of 6.2, struck about 60 miles northwest of Haines at 4:31 a.m. and was felt across hundreds of miles of Southeast Alaska and northwest Canada.

Dozens of aftershocks were recorded in the following hours, including one with a preliminary magnitude of 6.4 in almost the same location at 6:18 a.m., roughly two hours after the initial quake.

Tim Holm, a Haines Borough emergency medical technician and firefighter, said he received no local reports of damage from the quakes.

"It pretty much woke up the whole town," Holm said. "I didn't think they were overly huge for Southeast Alaska — it was a pretty good little roller."

Emily Deach, the borough clerk at the Municipality of Skagway, said she also hadn't heard reports of damage.

"It woke me up and I eventually got back to sleep; my kids had slept through it," Deach said. "The second one — at 6:15 a.m. — it woke me up again and I just got up for the day. You could still feel after the initial shock that things were still moving, and the earth was just settling in."

In Whitehorse, 80 miles northeast of the epicenter, one resident told CBC News the shaking lasted 30 seconds.

Elyn Jones, a morning newsreader in Whitehorse, said the quake sent employees at her two-story building beneath desks.

"The building was shaking unbelievably," Jones said. "It was just a really good swing to the building."

The Yukon News reported that about 8,000 people in the Whitehorse area lost power but most service was restored Monday morning. At least one Whitehorse building was closed due to structural damage including visible cracks in its exterior.

Paula Nugent works in the Lynn building in #Whitehorse. Here she is showing what's new after this morning's earthquake. pic.twitter.com/H4vMOAGwXV

Alaska state seismologist Michael West said the first quake was centered in a sparsely populated area along the Haines Highway, halfway between Haines and Haines Junction, Yukon, at a relatively shallow depth of about a mile and a third. The location is along the Denali Fault, one of the region's three most prolific sources for quakes, running from Southeast Alaska into northwestern Canada and up to the Alaska Range.

The quake was over in just a few seconds, West said, but could easily have generated reverberations felt for at least 30 seconds — in addition to the aftershocks.

"To have a couple of these magnitude 6-plus earthquakes together is not uncommon," West said. "We expect to see aftershocks in the coming hours, and probably for the coming days, slowly tapering off."

People across Southeast Alaska reported feeling the quake on the U.S. Geological Survey's Did You Feel It? website.

West said that although Alaskans are accustomed to high-magnitude quakes that strike in isolated areas and do no damage, Monday's shakes shouldn't be taken lightly.

[Quake in Italy should remind Alaskans of our own peril]

There was no danger of the quakes generating a tsunami, according to the National Tsunami Warning Center.