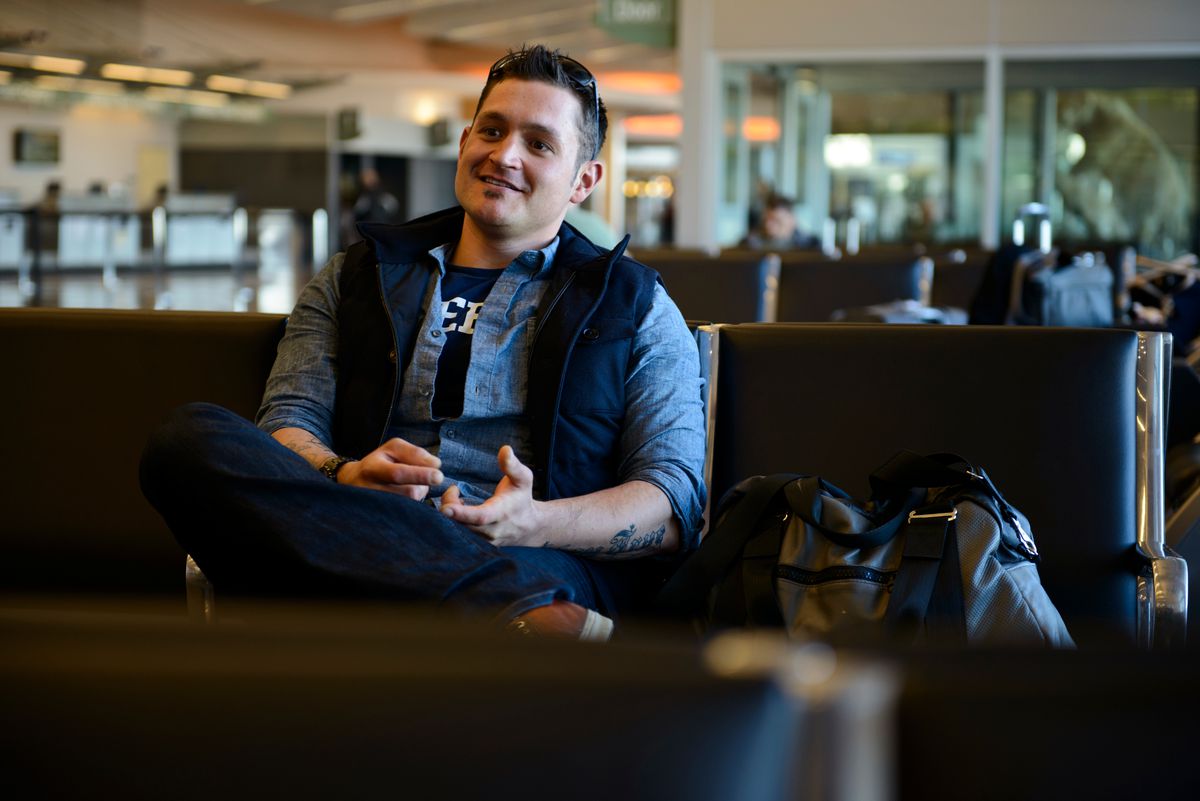 Nick McGlashan, a crabber and cast member of “Deadliest Catch,” has been speaking publicly about his battle with heroin and alcohol addiction. Photographed at Ted Stevens Anchorage International Airport on May 12. (Marc Lester / Alaska Dispatch News)

Nick McGlashan, a crabber and cast member of “Deadliest Catch,” has been speaking publicly about his battle with heroin and alcohol addiction. Photographed at Ted Stevens Anchorage International Airport on May 12. (Marc Lester / Alaska Dispatch News)

McGlashan, who spent his childhood between the remote Aleutian village of Akutan and the commercial fishing hub of Dutch Harbor, had been working on crab boats since he was 13. As an adult, he's gained a measure of fame as a deck boss featured on the past four seasons of the Discovery Channel's popular, long-running reality TV show about Bering Sea crabbers.

Years of worsening alcohol and drug addiction had stripped away much of what had been good about the 29-year-old's life. He'd managed to hang on to his job — and identity — as a Bering Sea crabber.

"Nick was good at hiding it," said his father, Bruce Lanford, a veteran Alaska commercial fishing captain who now lives in Florida.

But by last fall, McGlashan couldn't hide it anymore. He was working on the crabbing boat Summer Bay for Bill "Wild Bill" Wichrowski, a captain who considered McGlashan "the best deck hand in Alaska." The "Deadliest Catch" film crew and everyone else noticed McGlashan at his worst: pale, slurring his words, coming down off drugs. He could only hide that he was drug sick for so long.

When his captain learned of his stash of drugs in Dutch Harbor, McGlashan was fired, a moment also captured by the cameras.

"All I ever wanted to do was be a fisherman, and I lost that," said McGlashan. "I lost the ability to work at sea because I forgot how to live on land."

It's a strange situation: Lots of people in Alaska and all over the United States are struggling with opioid addictions, McGlashan said. Very few have reality TV crews following them around for the worst of it.

As brutal and public a reckoning as it was, McGlashan credits it for pushing him to get sober and launching him on a new path as a very public example of what recovery can look like.

'I didn't know what I was doing'

After being fired by Wichrowski, McGlashan said, he flew to Anchorage with $10,000 in cash and bought heroin. Then he bought a one-way ticket to Florida.

The next stop was inpatient drug and alcohol treatment in Washington state. He walked through the doors of the treatment facility on Nov. 11 and has been clean and sober ever since, he said.

In early May, he wrote his story in a confessional essay published in the online magazine Chosen. He admitted that he'd overdosed three times, and had been drinking a "half-gallon of vodka and shooting two grams of heroin, and one gram of meth" daily before he went to rehab.

"My addict self was killing me and I was struggling to die," he said.

The story of the "Deadliest Catch" crew member battling a heroin addiction resonated. Fox News picked it up, as did the New York Post and MSN. McGlashan found himself in a place he hadn't expected: using his notoriety to talk frankly about addiction.

Addiction is a problem not only in the commercial fishing industry but all over Alaska, all over the country, he said. There is no magic to what he is doing, and he is still early in his recovery. But for him, the best thing to do is talk about it.

His former captain said he isn't surprised by the way McGlashan has thrown himself into being a public figure for sobriety.

"The heroin epidemic in this country is just way out of control. People are dying every day," Lanford said. "If because of what he's doing he can help one person, save one person's life, then he's doing a good job."

McGlashan says he can't talk about his fate on the show, or whether his captain will give him another chance, because of a non-disclosure agreement with the Discovery Channel. But he is working in the fishing industry again. He has sought out other people in recovery on the boats he works on.

"We have meetings on the boat every day," he said. "We go out on the forepeak, where it's quiet."