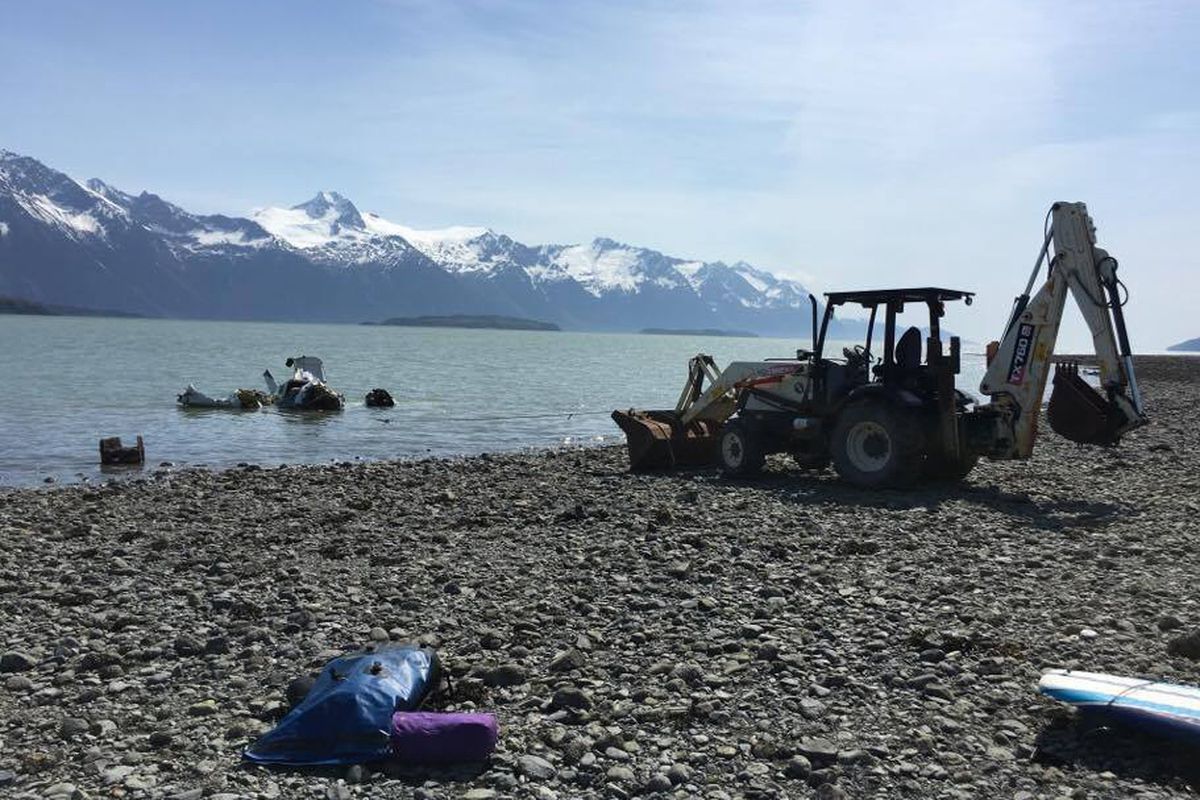 HAINES — As an incoming tide swamped the wreckage of a private plane that crashed south of Haines Saturday, a family, a tour guide and a visitor from Yakutat used a backhoe and sections of rope to keep the lone survivor, trapped inside, above water.

Juneau resident Chan Valentine, 31, was injured and pinned in the plane's back seat by the flattened seat of pilot David Kunat. He and another passenger were in the plane's front seats, unresponsive.

The Juneau Empire reported the second victim of the crash was Stanley Su Quoc Nguyen, 29, of California. The Empire also reported pilot Kunat's age as 29.

"The water would be up at (Valentine's) chest and we could pull it just enough for the water to come down to his waist. We did that four or five times," said Steve Dice, a state equipment operator from Yakutat. "We just wanted to save that guy's life and get him out of there. The worst thing would be watching that guy drown."

The twin-engine Piper Comanche crashed on the beach at Glacier Point, a roadless moraine and tour excursion site about 11 miles southwest of Haines.

Dice was visiting Haines residents Tom and Patricia Faverty and son Kirby, 14, at the family's cabin at David's Cove, 3 miles across Chilkat Inlet from Glacier Point, when the crash occurred a few minutes after 11 a.m. Dice had heard the plane approaching from the south and was watching it through binoculars.

It seemed to be flying at tree level and had just passed over a gravel airstrip at the point, Dice said.

"It did a low-elevation, 90-degree turn back toward the water, stalled, and went straight in. It was ugly."

Patricia Faverty said that even from across the inlet, the crash was dramatic.

"You could see the wing fly off with your naked eye. It was like a movie. It's still going over and over in our heads."

Outside cellphone range, the Favertys and Dice crossed the inlet in a skiff, arriving to find the plane's wreckage upright on the beach, 10-15 feet above the waterline. When they looked inside the plane, they were surprised to see movement.

Valentine was conscious and could say his name and birthday, but the impact of the crash left him effectively trapped him in a steel cube, Tom Faverty said.

"There was no door. The plane was all around him," Faverty said. "Also, he was all broken up. You're not supposed to move those guys. … Worst-case scenario, we could have tried to take (the plane) apart with the backhoe, or gone looking for a hacksaw. Plus, we didn't have any time."

The Favertys reassured Valentine and sent son Kirby, a high school track and cross-country runner, to get help at the camp of a summer tour operation about a mile away.

"Then the tide started coming in and it got crazy," said Patricia Faverty, who by then had cellphone service and made phone contact with town dispatchers. "I was screaming bloody hell on the phone."

Kirby Faverty located Wiley Betz, a guide at the tourist camp who responded on a four-wheeler, and brought word of a backhoe back at the camp. By the time Dice was able to retrieve the backhoe, the wreckage was already in the water.

"We knew we didn't have much time, but I didn't know we had that little time," Dice said.

Tying together some rope from the skiff, Dice and Tom Faverty attached the backhoe's bucket to the plane's landing gear and started pulling – twice breaking the line. After guide Betz located a chain, Faverty and Dice were able to keep enough pressure on the line to keep the plane afloat.

As the tide floated the wreckage, they were able to pull it toward shore 5 to 10 feet at a time – an estimated 30 feet total – keeping Valentine's head above water until Haines paramedics Al Giddings and Tim Holm arrived aboard a Temsco helicopter from Skagway.

Working in waist-deep water with tin snips, Giddings was able to cut a hole in the top of the plane to extract Valentine, Faverty said.

"The responders were very professional," Faverty said. "They had all the equipment they needed. Al was in charge and knew just what to do. He was amazing."

Valentine was transported by helicopter to Juneau, then Seattle, for treatment. Pilot Kanut of Juneau and the other passenger were declared dead at the scene, according to state troopers.

"They did the right thing. Valentine wouldn't have survived if they didn't do what they did," Clay said.

Weather included clear skies and calm waters at the time of the crash, rescuers said.

A debriefing on the accident by state troopers and officials in Haines is scheduled for Tuesday.