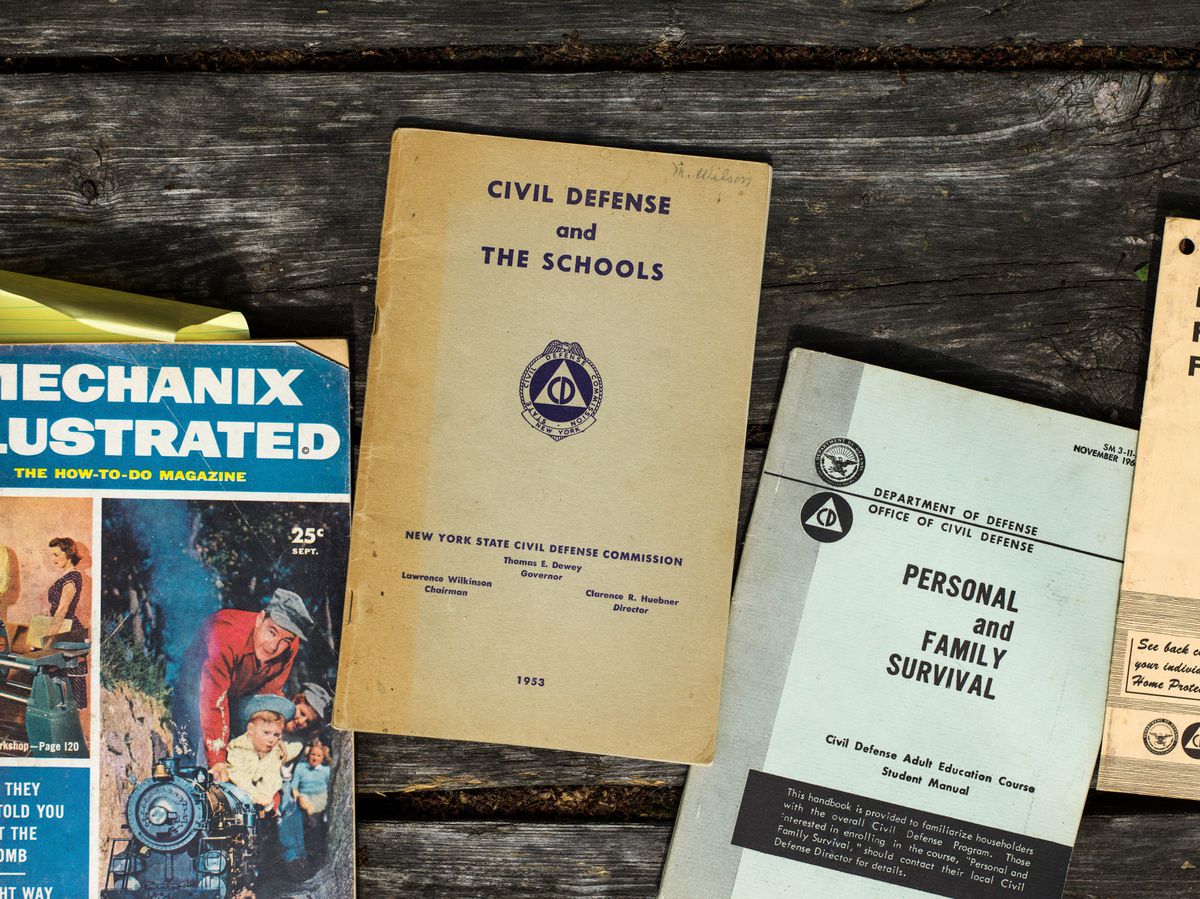 Alaska writer Michael Carey has a collection of civil defense guides and says that Alaskans often act dismissive about North Korean missiles because of the state’s history of foreign threats. (Ash Adams for The Washington Post)

Alaska writer Michael Carey has a collection of civil defense guides and says that Alaskans often act dismissive about North Korean missiles because of the state’s history of foreign threats. (Ash Adams for The Washington Post)

There have been times in Alaska's history when people have had deep anxiety about foreign threats. The state was bombed and two of its islands were occupied by the Japanese in World War II. And it is, after all, the closest anyone can get to Russia and still be on American soil.

But nobody here seems all that worried right now.

With North Korea's test of an intercontinental ballistic missile last week, the news has been filled with speculation that a nuclear warhead could reach the Last Frontier and that Anchorage could be the most realistic U.S. target for destruction. But people here have been talking about the possibility of missile strikes for decades, and Alaskans tend to focus on more tangible hazards, like avalanches covering the highway, bear maulings at campgrounds, boating accidents and earthquakes.

Besides, it's summertime. Residents are obsessed with the outdoors. The days are long. The salmon are running.

They have other things on their minds.

"It's not something that keeps me up at night," said Christine Homan, an elementary school teacher sitting at the counter at Wild Scoops ice cream shop with her husband, Zach, and sons, Leland, 4, and Colton, 6.

Between bites of salmonberry ice cream, Todd Sherwood, an attorney who served in the Air Force for 15 years, said that if North Korea were to do anything serious, the U.S. military reaction would likely be "disproportionate" and severe. He doubts the threats are legitimate.

"I'm more worried about whether I'm going to fall off my paddleboard on an Alaska glacier lake this summer," he said. "And I'm not all that worried about that."

Part of Alaskans' dismissive attitude about North Korea might have something to do with the state's history of serious threats from foreign powers, said Michael Carey, a journalist and historian who grew up in Fairbanks, Alaska.

During World War II – on June 3, 1942 – the Alaskan town of Dutch Harbor was bombed by the Japanese, and days later two Aleutian islands, Attu and Kiska, were occupied. Lots of people who lived in Alaska in the 1950s and 1960s remember civil defense drills, siren tests, blackout curtains and radioactive isotopes in milk because of atmospheric nuclear testing. There are still homes in Anchorage with Cold War-era fallout shelters. The proximity to Russia made the fear real, Carey said.

"We knew, if the balloon went up, as they said it, that Fairbanks would be a smoking irradiated ruin," Carey said. "The Russians were a really serious adversary we feared and respected. Just the hairdo of our friend Kim, he's just a sendup. We're supposed to think the fate of Earth is determined by North Korea? It might be, but it's just so easily laughed at."

"Here's the deal," Clayton said, as he got a haircut at Bunn's Barbershop downtown. "We've always been within reach of nuclear weapons, we've got some proximity to some fairly well-known bad actors."

Alaska has a number of military bases with the primary mission of fending off these kinds of threats, Clayton said, noting that the bases are strategic, their soldiers and airmen well-practiced. As he spoke, the sharp triangles of two military fighter jets from Joint Base Elmendorf-Richardson thundered overhead.

What is uncharted territory, he said, is the diplomatic style of the nation's current leadership in Washington.

"There was a period of time when I thought the State Department and the professional diplomats and, God help us, the president, could keep it even," he said. "This is a true political black swan event."

Adak, at the end of the Aleutian chain, is Alaska's westernmost town, so far from Anchorage it's in another time zone. It was once a Navy base, home to thousands of people and specialized radar that was part of the country's missile defense system. The base closed in the 1990s, and about 100 people live there now. Locals are worked up about a schedule change in the island's twice-weekly jet service. North Korea doesn't figure.

"You'd have to be pretty crazy to pick Adak as a target," said Adak resident Elaine Smiloff. "What's the reward for that?"

On Thursday evening, Cipriana Williams, 32, cast her line into Ship Creek near downtown Anchorage, looking for sockeye salmon. Her niece Yukari Williams, 5, sat next to her, playing games on an iPad.

She said she went fishing to get away from the ugliness of the news. There are all kinds of risks in life, she said, especially living in Alaska. Anchorage had a catastrophic earthquake in 1964, for example.

Anchorage, like many cities, has a response plan for both man-made and natural disasters, said Berkowitz, the mayor. Chances are, if that plan gets activated, it won't be North Korea that prompts it.

Julia O'Malley, a freelance writer and former columnist and reporter for the Anchorage Daily News, wrote this for The Washington Post.