She came to Alaska on the ‘cruise of a lifetime.’ Now she’s terminally ill and stuck in Anchorage. 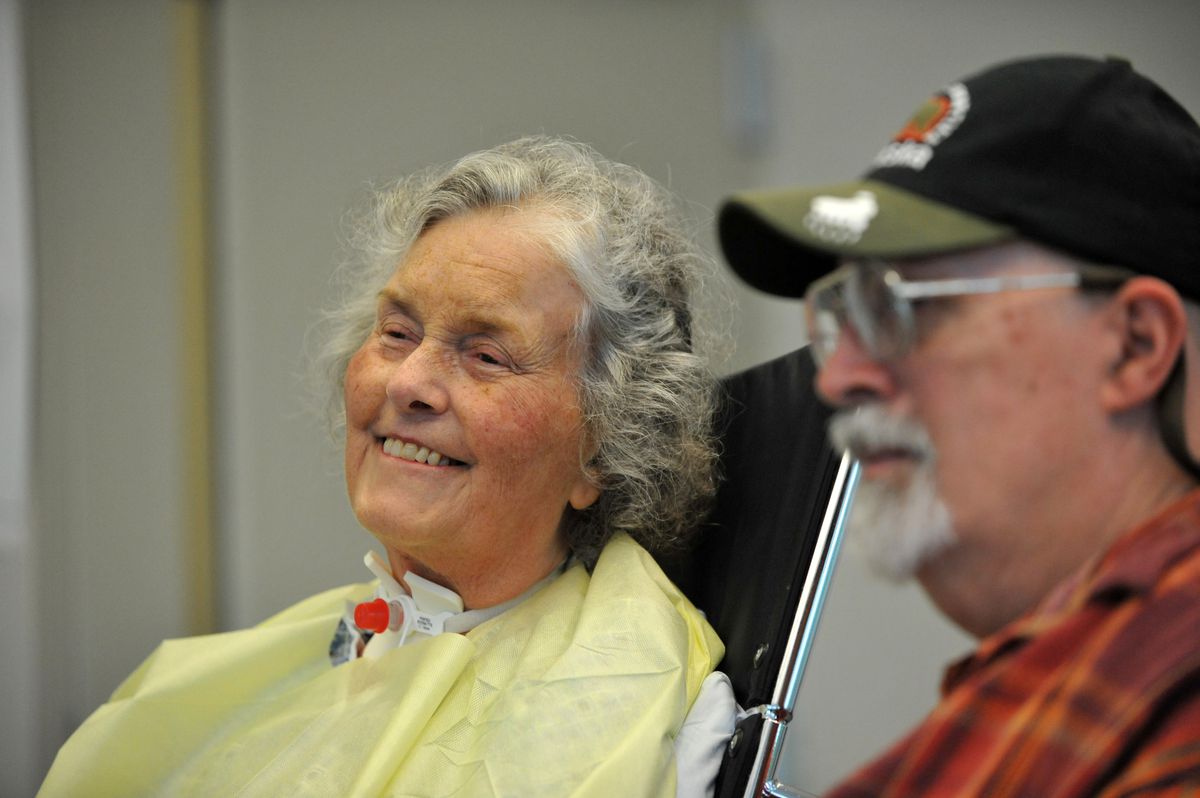 Nancy and Paul Greathouse talk about their situation at St. Elias Specialty Hospital in Anchorage, Alaska, on Tuesday, July 18, 2017. Nancy Greathouse had a medical crisis while on a cruise to Southeast Alaska and is now stuck in Anchorage because of the high cost of a medical flight back to their home in Maryland. (Bob Hallinen / Alaska Dispatch News)

Nancy and Paul Greathouse talk about their situation at St. Elias Specialty Hospital in Anchorage, Alaska, on Tuesday, July 18, 2017. Nancy Greathouse had a medical crisis while on a cruise to Southeast Alaska and is now stuck in Anchorage because of the high cost of a medical flight back to their home in Maryland. (Bob Hallinen / Alaska Dispatch News)

Editor's note: This story has been updated.

Nancy Greathouse came to Alaska on a cruise ship to see mountains and glaciers and to celebrate her husband's retirement.

"We worked 40 years," said her husband Paul Greathouse. "We wanted to take the trip of a lifetime."

They did not know a medical crisis would trap Nancy here, terminally ill and living out the remaining days of her life inside an Anchorage hospital thousands of miles from family.

Nancy, 71, has been at St. Elias Specialty Hospital in Midtown Anchorage for two months, mostly in bed, unable to even go in a wheelchair outside to smell the peonies in the yard without a medical escort beside her. She has been diagnosed with terminal cancer, along with an autoimmune disease flare-up that nearly killed her on the cruise ship.

Standing between her and going home to Beltsville, Maryland, is a medical evacuation flight that could cost upward of $50,000 — which the couple can't afford and which insurance won't cover. An online fundraiser her son started has pulled in about $3,500 of the  cost.

She does not want to die in Alaska.

"My biggest desire is to go home," said Nancy, who speaks in a whisper due to the tracheotomy doctors performed. "I want to see my grandchildren."

'Trip of a lifetime'

Nancy and Paul Greathouse married later in life, just as they were getting ready to enjoy the fruits of retirement.

Nancy is a retired Baltimore second-grade teacher. Paul, 68, retired in December from running a print shop that served the Maryland state Legislature.

Each already had their own families: Nancy has five children and Paul has two; both have grandchildren. They met in a Spanish language class. Nancy wanted to study the language because her daughter-in-law is from Honduras. Paul figured that most people in the world speak more than one language, so maybe he should too.

Nancy had health problems and Paul had vision problems, but they shared a lively and adventurous life in Beltsville, a town between Washington, D.C., and Baltimore. They went to church events and saw their grandchildren at family nights. They liked going on day trips and traveling by bus.

They planned an Alaska cruise for May. It was supposed to be a celebration of a new stage of life.

Nancy knew she had cancer, but her health was stable enough that physicians at home told the couple that it would be fine to go on the cruise, Paul said.

They set sail from Vancouver on a Carnival Cruise in early May. They made it as far as Juneau, one of the first ports, Paul said. They remember going to see a receding glacier.

Then Nancy had a violent flare-up of an illness called Myasthenia gravis, which causes her immune system to attack and weaken her muscles. She'd had episodes before, but nothing like this, she said.

It compromised her breathing to the point that she was taken off the cruise ship and flown to Alaska Regional Hospital in Anchorage, she said. Doctors performed a tracheotomy. She was fed through a feeding tube. She doesn't remember getting from Juneau to Anchorage.

After Alaska Regional Hospital's intensive care unit, she landed at St. Elias, a long-term care hospital. Her cancer has spread, and the time in bed has further weakened her body. She can't walk or stand without help.

The couple has Medicare as their primary insurance and secondary insurance from their retiree benefits through their former jobs, with the State of Maryland and the City of Baltimore, Paul said.

But they don't have insurance that would cover the steep cost of an air ambulance and allow them to go home, where their families and doctors are waiting.

If a person is too sick to get on or off a commercial airplane or to sit for the duration of the flight, the airline probably won't transport them, said Ted Galbraith, the director of clinical services for LifeMed Alaska.

An air ambulance allows the patient to be closely monitored by trained medical personnel and to be transported in the equivalent of a hospital bed, he said. It also essentially means renting the use of an entire airplane.

Paul has thought a lot about that insurance, which they didn't take out.

"I kick myself every day for not taking the travel insurance," he said.

Cruise lines have an obligation to care for the passenger onboard the ship and to put them safely ashore at the closest medical facility, said Jim Walker, a Florida plaintiff's attorney who writes a blog critical of the cruise industry. But that's where it ends.

"The cruise line does not have an obligation to fly them from the port they are in home with a medevac flight," he said.

Carnival Cruise Line said it does not require health insurance for travelers but encourages passengers to buy additional travel insurance, especially those with pre-existing medical conditions.

Carnival repeatedly reached out to the Greathouse family after Nancy was removed from the ship to see how she was doing, said spokeswoman Christine de la Huerta. Paul said he eventually asked them to stop calling because, he said, the calls offered no help to get back to the Lower 48 and became a nuisance.

'I don't think we would have made it this far'

In Alaska, unexpected help has come from an Anchorage church, whose members have housed, fed, transported, visited and ministered to the couple for months.

A friend at the Church of the Nazarene congregation the couple belongs to in Maryland had a relative in Anchorage who was a member of Chapel of the Cross, a Nazarene church on Hillside Drive, said Gene Rosebecke, a senior pastor.

A member of the church has been housing and feeding Paul, and others have taken turns driving him to see Nancy every morning. The pastor picks him up before dinner.

Someone even took Paul on an Anchorage trolley tour, so he could see something else of the city besides the hospital and the Golden Corral buffet, where he sometimes eats lunch.

Congregation members have been so enthusiastic with offers to help that there's sometimes more volunteers than things to do, Rosebecke said.

"We've met some wonderful people here," Nancy said. "I don't think we would have made it this far without them."

For now, they have settled into a frustrating routine: Nancy tries to get better, and Paul spends the day with her and tries to figure out the endless complexities of insurance. Another problem is looming: The couple says that on July 27, they will have used up Nancy's lifetime Medicare benefit and will need to leave the hospital.

For lack of an air ambulance flight, they are looking for another place that can care for her, like an assisted living or nursing home. But so far, they haven't found anything.

"We have no idea what we're going to do," Paul said.

Nancy doesn't know how much time she has left. It's hard not to be depressed: Her son is getting married in Vermont in August. She knows she won't make it there. But she's holding out hope that she'll get back home, somehow.