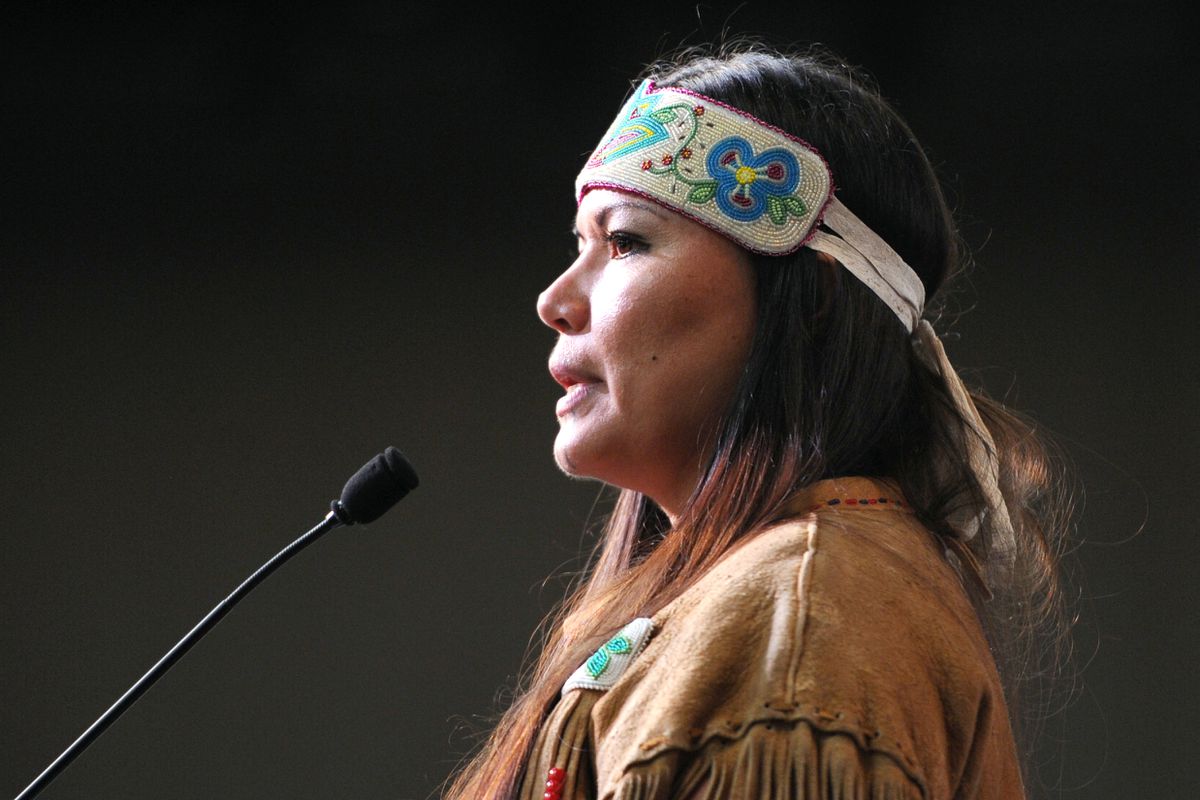 Sgt. Jody Potts, village public safety officer and Director of Public Safety, Tanana Chiefs Conference, was one of two keynote speakers during the opening of the Alaska Federation of Natives Convention at the Dena’ina Center in Anchorage on Thursday, Oct. 19, 2017. (Bill Roth / Alaska Dispatch News)

Sgt. Jody Potts, village public safety officer and Director of Public Safety, Tanana Chiefs Conference, was one of two keynote speakers during the opening of the Alaska Federation of Natives Convention at the Dena’ina Center in Anchorage on Thursday, Oct. 19, 2017. (Bill Roth / Alaska Dispatch News)

Jody Potts, a village public safety officer who leads the program for Tanana Chiefs Conference, wore her traditional Gwich'in regalia, not her uniform Thursday when she gave a powerful keynote address to the Alaska Federation of Natives convention in Anchorage.

She spoke of strength from traditional values of living off the land, of people working together, of protecting one another. She spoke of how those values ease both personal loss and historical trauma experienced by Native people from cultural disruption, disease and death.

Potts grew up in the Native Village of Eagle, the daughter of a man from Iowa who fell in love with the country and a strong Gwich'in mother. Her dad ran a trapline with a cabin 70 miles away and her mother, who worked as a health aide and served on tribal council, would mush to it, Potts told the AFN crowd.

When Potts – a triathlete and musher herself — later mentioned to her mother it must have been hard to mush so far, the older woman responded: "Oh no. I never mushed those dogs. I was always out ahead of the team breaking trail on snow shoes."

Potts spoke of other things too. The bootleggers that her mother helped put away. The uncle who committed suicide after drinking. The suicide in March of the father of her children.

"Alaska has high rates of suicide. Maybe some in here can relate, the complicated grief that we go through, the challenges of getting through the fog of that grief," Potts said.

She took time off from work and worked through it with the kids.

"When we were in our darkest days and our darkest moments in the last seven months, the greatest strength we found was when we came together, me and my three children," Potts said.

"I encourage all of us to rise up and stand with our victims of violence," she said. "Stand up with me. … There's not enough of that in our villages."

And there in the Denai'ina Civic and Convention Center, in downtown Anchorage, Native people from all over Alaska stood up with her.

Just days before another special legislative session, Lt. Gov. Byron Mallott gave a passionate speech to AFN about the Alaska fiscal crisis, the multibillion-dollar gap between state revenues and spending.

In the three years since he and Gov. Bill Walker took office, the Legislature has spent $14 billion in savings. Only $2.5 billion is left in the state's main savings account, he said.

"We are down to the last of those reserves," Mallott said. "Gov. Walker has called the Legislature into special session so many times in these three years that we lose count, in order to try and close that gap."

The state budget has been cut to 2008 levels yet some legislative leaders keep calling for more. They say the state has "a bloated budget," but they are wrong, he said.

Show where it is bloated and the Walker administration will respond, he said.

Rural public safety is a crisis. Public schools need to do more.

"Where is the bloated budget to deal with that?" Mallott said.

A young person was murdered then left in a rock quarry covered by a tarp for four days until police could get there.

"Where is the bloated budget for that?" he said, his voice breaking.

The speech set a tone of urgency as legislators prepare to return to Juneau.

In a brief video message played at the convention, Interior Secretary Ryan Zinke gave assurances that the Trump administration is on board with a number of issues of concern to Alaska Native people.

Native handicrafts with walrus ivory? That's not the same as banned elephant ivory and the administration will protect the right of Alaska Native people to sell their art, Zinke said.

He underscored one issue that Alaska's congressional delegation has worked on for years: The problem of Alaska Native veterans who missed getting their Native land allotments because they were deployed to Vietnam.

"This deserves to be fixed and is a personal priority of mine," Zinke said.

He talked about development though didn't mention the newly recharged Pebble mine project. A number of Bristol Bay tribes are joined to fight it, while Trump's Environmental Protection Administration has dropped efforts to limit or block it.

"We are streamlining our operations. This includes everything from the permitting processes for development to the cleanup of contaminated lands," Zinke said.

Zinke called her the first Alaska Native presidential appointee to require that approval.

That may be a tad off. Morris Thompson, the late Doyon Ltd. president, served as Indian affairs commissioner from 1973 to 1976. The commissioner's position required Senate confirmation.

"More than budgets and agency work, with Tara at the helm this is a critical time for new ideas, new ways of doing things," Kitka said. "Attention to sustainable local economies attention to affordable energy, attention to removing road blocks and doing our own projects on our own land."

"I am almost an empty nester so I've got a lot of time on my hands coming up. I certainly am up for the task if confirmed," Sweeney said. "I really appreciate all the support from this body. … I hope that if confirmed I will represent Alaska and the Native American community well."

AFN handed out its top two awards on Thursday for outstanding contributions to Alaska Native people and causes.

Robert Nick of Bethel was named 2017 Citizen of the Year and retired professor Stephen Langdon received the Denali Award, the organization's top recognition for a non-Native person.

Nick grew up in Nunapitchuk on the Yukon-Kuskokwim Delta and in the area known as Akulmiut.

He's held numerous positions, starting with his election to Nunapitchuk City Council in 1963. He's served on boards of and cofounded entities that are fixtures: the Yukon-Kuskokwim Health Corp., Calista Corp. and Alaska Federation of Natives.

He gave his thank you speech largely in Yup'ik.

Langdon, professor emeritus of anthropology at University of Alaska Anchorage, has spent much of his professional career researching public policies and their impacts on Alaska Native people.