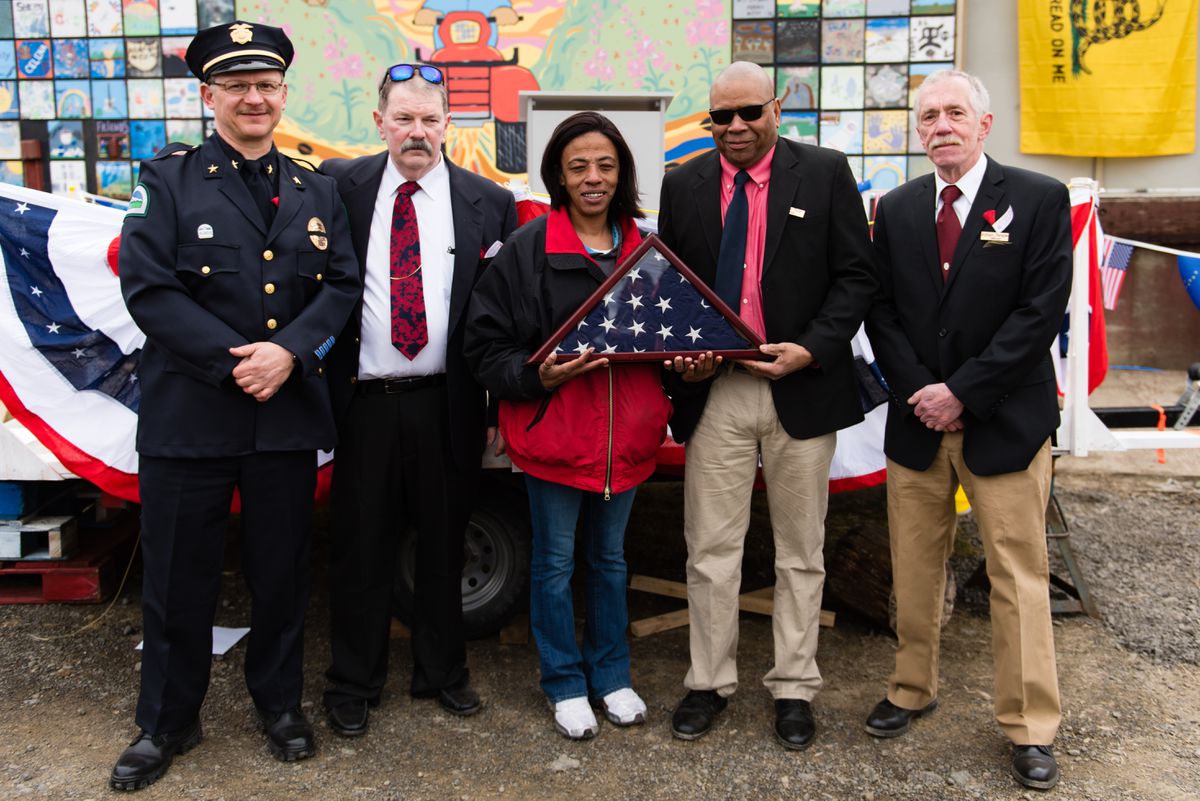 In 1992, a Dillingham police officer named Tony Jones died after a disturbed teenager, barricaded in a hardware store, shot him during a standoff.

Jones had only been in the Bristol Bay town for a few years.

Nicknamed "Flip,"  he was known for his laid-back manner. He often played pick-up football or basketball games with the local kids.

When Jones died, he left behind a 12-year-old daughter in Maryland he'd just been getting to know. She was named Antoinette, after her dad. Today, she's a married 38-year-old mom in Salisbury, Maryland, who goes by Toni Jones-Fields.

A few years ago, Jones-Fields typed her father's name into Google, searching for news about the man who murdered him. She had no idea at the time it would lead to a friendship with a man advocating for the release of her father's killer.

But, a few weeks ago, that friendship brought Jones-Fields to Dillingham for the first time, a trip she says changed the way she remembers her father.

"I didn't realize how much of an effect he had on people," she said. "They got to see him doing what he loved to do."

Jones-Fields was a toddler when her dad moved to Alaska, first to Haines, where he met and married a local woman, and then, around 1990, to Dillingham, where he took a job on the police force.

Her mom and dad were not together, and it wasn't until she was about nine that they started to reconnect after years of little contact, Jones-Fields said in an interview.

"We'd talk on the phone a lot," she said. "I had a trip planned for that summer to go visit him."

Then came Feb. 11, 1992, the day Eugene Maud barricaded himself in a hardware store in the center of town with a huge supply of guns and ammunition.

Jones, one of only six police officers on the force, was on his day off. But he rushed to the scene anyway, according to Anchorage Daily News reports from the time.

He was shot in the head.

After a daylong standoff, Maud gave himself up to troopers.

Maud's tragedy had been unfolding since he was a young child.

At age 3, he witnessed his 18-month-old sister and 5-year-old brother shot to death by a drunk neighbor in the village of Aleknagik. His mother was shot in the face but survived, according to an Alaska Supreme Court case detailing the killings.

He went into foster care, living in 40 different homes by the time he was a teenager, according to news reports from the time.

Maud was convicted of murder and sentenced to 65 years in prison for Jones' death. He was 17.

Jones-Fields grew up and settled in Salisbury, a small town on the Eastern Shore of Maryland. She had a son and a daughter and took a job in a medical office.

Starting a family deepened her sense of loss about her father's death, she said.

"I didn't have anybody to walk me down the aisle," she said. "That's when it really hit home he wasn't here."

A few years ago, she Googled Maud's name, something she was in the habit of doing to keep abreast of any developments in the case.

She came across a story about a man in Dillingham she'd heard of before, another police officer who had been shot at — a bullet sailed through his hat — in the standoff when her father was killed.

Terry Rogers had been interviewed on the public radio station, talking about how he had learned about Maud's early years and had come to forgive him.

He had even flown to Maud's parole hearing to advocate for his early release.

Jones-Fields called Dave Bendinger, who was then the news director at KDLG 89.9, Dillingham's public radio station.

"I was looking for answers on why Mr. Terry was trying to get this man paroled," said Jones-Fields. "At that time, I didn't agree with it."

"She was very upset to hear about Terry's forgiveness, basically," Bendinger said.

He offered to connect the two so they could talk directly. Bendinger asked if he could record what he felt might be a powerful conversation.

Rogers had been trying to make sense of the incident for years.

"It profoundly affected me," he said. "How I looked over my shoulder."

He felt survivor's guilt about Jones.

"Tony took my bullet. If he hadn't gone on duty, I would have eventually gotten to where he was at," he said. "And I would have taken that bullet."

When Rogers and Jones-Fields got on the phone together, some of the anger melted away, she said.

She had questions that had gone unanswered for decades, and finally someone to answer them: Did her dad ever talk about her? Did he lay in the snow for a long time that night? Had he suffered? Did Eugene Maud mean to kill him? And was he sorry?

Rogers told her everything he could: Her father talked about her a lot. He had been killed by a shot to the head and died instantly. His body hadn't laid long in the snow. He didn't know if Eugene Maud meant to hit Officer Tony Jones with the bullet. But Rogers said he did think Maud was sorry.

At the parole hearing Rogers had attended, Maud lay his head on the table and sobbed uncontrollably, he told her. He didn't stop for over an hour.

"I've always wondered if Mr. Maud was sorry," she said in the recorded conversation. "I feel like knowing he was sorry would make it just a tad bit easier to understand that he went through things that apparently got the best of him."

"If he was sorry, my heart hurts for him."

Maud won't be up for another chance at parole for years. But Jones-Fields said in an interview she's softened in her view of Maud.

"Maybe prison isn't the right place for him," she said.

"Everyone wanted to be involved"

The radio stories about Rogers' advocacy for Maud and the conversation between Jones-Fields and Rogers generated buzz.

"It caught the attention of a lot of people in town," Bendinger said. "People said 'Gee, I was there that night.' Some people brought in photos from the funeral."

After the conversations aired, Rogers kept in touch with Jones-Fields. He began to plan a Memorial Day commemoration of Jones and other law enforcement officers killed in Bristol Bay. It would have to involve Jones-Fields, he thought. He knew she had never been to Dillingham. Maybe if she came in person, it would give her some closure, a chance for the town to show how much they appreciated and still remembered her father?

He booked flights for her and her husband using airline miles and cash. Another man in town donated $500 toward the trip.

Once word got out, "everybody wanted to be involved," Rogers said. "The manager of the Bristol Inn heard. He said, 'She's going to be our guest.'"

Others designed and paid for a plaque for the spot where Jones was killed. The event expanded: Lt. Gov. Byron Mallott was invited. Volunteer police and fire chaplains in Anchorage offered to escort Jones-Fields from Anchorage to Dillingham and back. At one point, a local man approached Rogers with a suggestion:

"He said this is a community affair and this is a Yup'ik community. If you have a Yup'ik affair, it involves a potluck," Rogers said.

Rogers added a potluck. The N&N Market offered to donate hot dogs and other picnic food.

Finally, at the end of May, the day came.

Jones-Fields and her husband, Nelson Fields, arrived in Alaska for a whirlwind 48 hours.

Before the big ceremony on Memorial Day, she took a few moments to herself to walk down to the spot where her dad died. The place is now a grocery store.

Wherever she went, people walked up to her to share memories of Officer Tony Jones.

In Dillingham, the weather was raw and rainy. People still turned out for the memorial service.

"People are just good there," she said.

When she got home, she texted Rogers: "We're family now."

What sticks with Jones-Fields is how the whole community seemed to remember her dad even though he'd lived there for such a short time, so many years ago.

She left one encounter with the sense that her dad really was the man she'd always imagined him to be, she said.

In the middle of town, a woman walked up to her with tears in her eyes.

"She said, 'I was in a domestic violence situation and I couldn't get out. Your dad saved me,'" Jones-Fields said. "Other than the birth of my children, there has never been a more proud moment of my life."