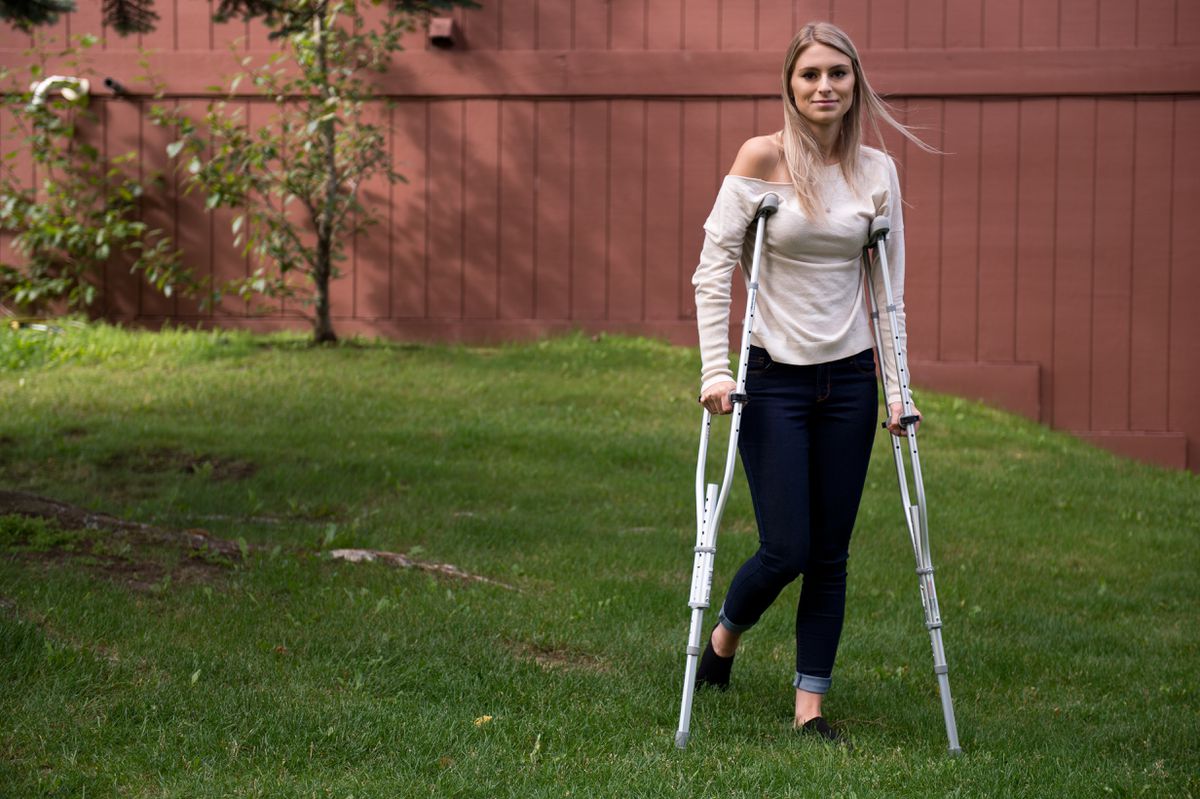 Chelsea Jasinski said she fractured a bone in her foot when she fell from The Zipper ride at the Alaska State Fair. Photographed in Anchorage on August 31, 2018. (Marc Lester / ADN)

Chelsea Jasinski said she fractured a bone in her foot when she fell from The Zipper ride at the Alaska State Fair. Photographed in Anchorage on August 31, 2018. (Marc Lester / ADN)

PALMER — An Anchorage flight attendant says she was unrestrained when she fell off the moving Zipper ride at the Alaska State Fair on Saturday, suffering a broken bone in her foot and other injuries.

The popular ride features enclosed cages that gyrate as they rotate up and over a tall boom at the state's largest fair in Palmer, where the midway draws upward of 350,000 people.

Chelsea Jasinski, a 24-year-old Alaska Airlines attendant, said the ride appeared to malfunction and began moving before it should have, dumping her on the ground from eight or 10 feet up.

The fair issued a statement Thursday in response to media calls: "A 24-year-old woman was entering the ride carrier to be seated. As she was entering, the placement of the carrier shifted, causing her to fall."

Jasinski said her injuries couldn't have been caused by such a short fall. She also hurt her hip. An orthopedic specialist's orders mean she can't work for two weeks.

Jasinski said she had barely sat down when the cage began to move, then revolved back and dumped her out.

She landed hard on her right leg and had to jump out of the way because the ride was running, she said. "Luckily I looked up to see the next cart as it was coming."

'Not even remotely close'

Two witnesses also contradicted the fair statement, saying they saw Jasinski fall after the ride began to move, not while she was getting in.

"Interesting," said Shanna Allen, an Anchorage woman whose 8-year-old son was riding the Zipper, when she heard the statement. "And not at all what happened. Not even remotely close to what happened, actually."

Allen said she saw the ride start up and move counter-clockwise before Jasinski fell out.

Lolly Reid, of Anchorage, was sitting on a bench near the Zipper while her young son waited in line behind Jasinski and boyfriend Slavik Lund. She saw Jasinski get on the ride as Lund paused to leave a water bottle.

"I could see clearly," Reid said Friday. "The ride attendant did not shut the door, the ride started on its own, and she fell out."

She also said the doors appeared open on several other empty cages as the ride started up. A photo Reid took after the ride stopped shows the doors hanging open.

Uninjured at the time

Chugiak-based Golden Wheel safety manager Chase Eckert provided no additional information this week beyond the fair's statement, written in conjunction with the company. He said Thursday that he didn't hear the full extent of Jasinski's injuries until an Anchorage Daily News reporter told him.

Jasinski said Eckert did talk with her and asked if she was OK. She didn't have any obvious broken bones and wasn't bleeding, she said, so she said yes.

It wasn't until the next day she realized the extent of her injuries, she said. On Sunday, she went to an urgent care clinic, and was referred to an orthopedic physician.

Slavik called Golden Wheel that day but Jasinski said she didn't hear back from Eckert until Tuesday.

Eckert, in a conference call Thursday with fair spokesman Dean Phipps, said he left a message with Jasinski, instructing her to call the company's insurance company. As of Thursday, she had not.

Jasinski said she's working with a personal-injury attorney recommended by a family friend, and the attorney will deal with the insurance company.

The ride continued to operate after a brief shutdown Saturday so Golden Wheel and a third-party inspector could make sure it was safe, Eckert said.

"No mechanical deficiencies were found and all passenger restraints were deemed operable," the fair statement said.

No mechanical failure, no shut down

Under new state regulations, Jasinski's injuries do not appear to qualify as something Golden Wheel had to report immediately to the Alaska Department of Labor and Workforce Development's mechanical inspection section, officials say.

Under the "reportable incident" process, rides are shut down, investigated and inspected before the state finds the public is safe and reopens them.

There had been just two such accidents at an Alaskan amusement ride since 2007 under old regulations that set the reporting bar as someone dying or suffering injuries that required medical care.

A slingshot-style ride called the Ejection Seat malfunctioned in May 2014 in Anchorage, sending a man to the hospital with serious facial injuries. Last year, a dragon-themed kiddie roller coaster called the Orient Express malfunctioned at the Tanana Valley State Fair, giving a woman and her children back and neck injuries.

Jasinski's injuries would have prompted a report — and state shutdown — last year.

Under new regulations that went into effect this year, however, the state shuts down rides in cases of death, injury serious enough to require medical evacuation, or if a mechanical failure hurts someone, according to Will Harlan, mechanical inspection section director.

That doesn't appear to cover what happened to Jasinski, Harlan said.

"According to Golden Wheel, the injury was caused by a ride imbalance," Harlan said.

Golden Wheel was required to report any injury on a ride within 24 hours, and reported Jasinski's on Tuesday, he said. He didn't know why there was a delay, but said it appeared the company didn't realize Jasinski was hurt until that day.

"The regulations were written with the understanding that not every injury happens as a result of mechanical failure," he said. "The Legislature didn't charge us with regulating amusement ride employees, for example."