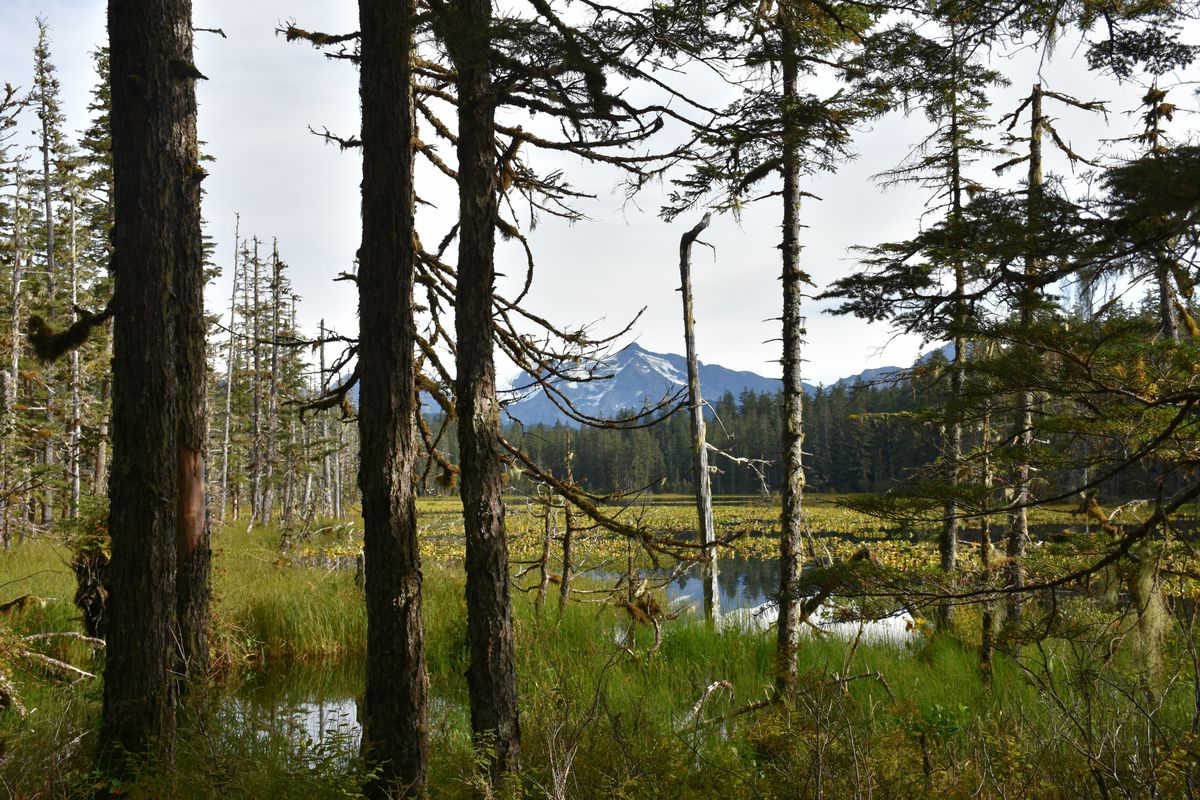 A view from the Situk Lake Trail in Yakutat, Alaska, of the Tongass National Forest. Photo courtesy of Paul A. Robbins of the U.S. Forest Service

A view from the Situk Lake Trail in Yakutat, Alaska, of the Tongass National Forest. Photo courtesy of Paul A. Robbins of the U.S. Forest Service

WASHINGTON - President Donald Trump has instructed Agriculture Secretary Sonny Perdue to exempt Alaska’s 16.7 million-acre Tongass National Forest from logging restrictions imposed nearly 20 years ago, according to three people briefed on the issue, after privately discussing the matter with the state’s governor aboard Air Force One.

The move would affect more than half of the world's largest intact temperate rainforest, opening it up to potential logging, energy and mining projects. It would undercut a sweeping Clinton administration policy known as the "roadless rule" thathas survived a decades-long legal assault.

Trump has taken a personal interest in "forest management," a term he told a group of lawmakers last year he has "redefined" since taking office.

Politicians have tussled for years over the fate of the Tongass, a massive stretch of southeastern Alaska replete with old-growth spruce, hemlock and cedar, rivers running with salmon, and dramatic fjords. Bill Clinton put more than half of it off limits to logging just days before leaving office in 2001, when he barred the construction of roads in 58.5 million acres of undeveloped national forest across the country. George W. Bush sought to reverse that policy, holding a handful of timber sales in the Tongass before a federal judge reinstated the Clinton rule.

Trump's decision to weigh in, at a time when Forest Service officials had planned much more modest changes to managing the agency's single largest holding, revives a battle that the previous administration had aimed to settle.

In 2016, the agency finalized a plan to phase out old-growth logging in the Tongass within a decade. Congress has designated more than 5.7 million acres of the forest as wilderness, which must remain undeveloped under any circumstances.

But Alaskans, including Gov. Michael Dunleavy and Sen. Lisa Murkowski, both Republicans, have pressed Trump to exempt their state from the roadless rule, which does not allow roads except when the Forest Service approves specific projects. It bars commercial logging.

In a statement, Murkowski said all of Alaska's elected officials have sought to block the roadless rule.

"It should never have been applied to our state, and it is harming our ability to develop a sustainable, year-round economy for the Southeast region, where less than one percent of the land is privately held," she said. "The timber industry has declined precipitously, and it is astonishing that the few remaining mills in our nation's largest national forest have to constantly worry about running out of supply."

Alaskans have found a powerful ally in the president. Speaking to reporters on June 26, after meeting with Trump during a refueling stop at Elmendorf Air Force Base, Dunleavy said of the president, “He really believes in the opportunities here in Alaska, and he’s done everything he can to work with us on our mining concerns, timber concerns; we talked about tariffs as well. We’re working on a whole bunch of things together, but the president does care very much about the state of Alaska.”

Trump expressed support for exempting the Tongass from the roadless rule during that conversation with Dunleavy, according to three people who spoke on the condition of anonymity to discuss internal deliberations. Earlier this month, Trump told Perdue to issue a plan to that effect this fall, these individuals said.

It is unclear how much logging would take place in the Tongass if federal restrictions were lifted, since the Forest Service would have to amend its existing management plan to hold a new timber sale. The 2016 plan identified 962,000 acres as suitable for commercial timber and suggested no more than 568,000 acres of that should be logged.

John Schoen, a retired wildlife ecologist who worked in the Tongass for the Alaska Department of Fish and Game, co-authored a 2013 research paper finding that roughly half of the forest’s large old-growth trees had been logged last century. The remaining big trees provide critical habitat for black bear, Sitka black-tailed deer, a bird of prey called the Northern Goshawkand other species, he added.

Trump has frequently talked with his advisers about how to manage the nation's forests, and signed an executive order last year aimed at increasing logging by streamlining federal environmental reviews of these projects. The president came under fire after suggesting during a visit to Paradise, the California community devastated by a 2018 wildfire, that the United States could curb such disasters by following Finland's model since that nation spends "a lot of time on raking and cleaning and doing things, and they don't have any problem."

The president has peppered Perdue with questions about forest management and has indicated that he wants to weigh in on any major forestry decision, according to current and former aides. Trump wanted to deprive California of federal funds in retaliation for the way they managed the state's forests, but he ultimately did not follow up on the plan.

One former Trump staffer, who spoke on the condition of anonymity to avoid retaliation, said forest policy has become "an obsession of his."

White House and Agriculture Department officials referred questions this week to the Forest Service, which declined to comment. But the three people who spoke on the condition of anonymity said it was forging ahead with an exemption at Perdue's instructions.

About 40 percent of wild salmon that make their way down the West Coast spawn in the Tongass: The Forest Service estimates that the salmon industry generates $986 million annually. Returning salmon bring nutrients with them that sustain forest growth, while intact stands of trees keep streams cool and trap sediment.

Wood, who worked on the Clinton rule while at the Forest Service, said that in recent years agency officials have "realized the golden goose is the salmon, not the trees."

"They need to keep the trees standing in order to keep the fish in the creeks," Wood said.

The question over what sort of roads should be built in America's remaining wild forests sparked intense battles in the 1990s, culminating in the 2001 rule affecting a third of the Forest Service's holdings in a dozen states. Some Western governors, including in Idaho and Wyoming, challenged the restrictions.

In some cases, conservationists and developers have been able to forge a compromise. A decade ago, for example, Idaho officials opened up roughly 400,000 acres of roadless areas to ease operations for a phosphate mine while protecting 8.9 million acres in exchange.

But in Alaska consensus has been more elusive, with many state officials arguing that the limits have hampered development.

The Forest Service has approved at least 55 projects in roadless areas, according to the agency, including 36 mining projects and 10 projects related to the power sector. Most projects win approval "within a month of submission," according to an agency fact sheet.

But Robert Venables, executive director of Southeast Conference, said permitting for some projects has taken years and made them too costly to complete. A proposal that would have lowered electricity costs in the Alaskan community of Kake by connecting its supply to neighboring Petersburg, he said, won approval only after a lengthy review that imposed requirements that boosted the price tag into the tens of millions.

"The roadless rule has shown itself to be very arbitrary and cumbersome," Venables said in a phone interview. "Many projects have proven to be uneconomic, because of the constraints here."

A number of businesses operating in the region back the current restrictions, arguing that the forest's rugged landscapes, abundant wildlife and pristine terrain draw visitors to the region.

Dan Blanchard, owner and CEO of the adventure travel firm UnCruise Adventures, said in an interview that when he was working as a boat captain in the 1980s, "we had a difficult time avoiding clear cuts in southeast Alaska."

“The forest has come back,” said Blanchard, who has 350 employees and brings 7,000 guests to Alaska each year. “The demand for wilderness and uncut areas have just dramatically increased. Our view here is there are very few places in the world that are wild. Here we have one, in southeast Alaska, and it’s being put at risk.”