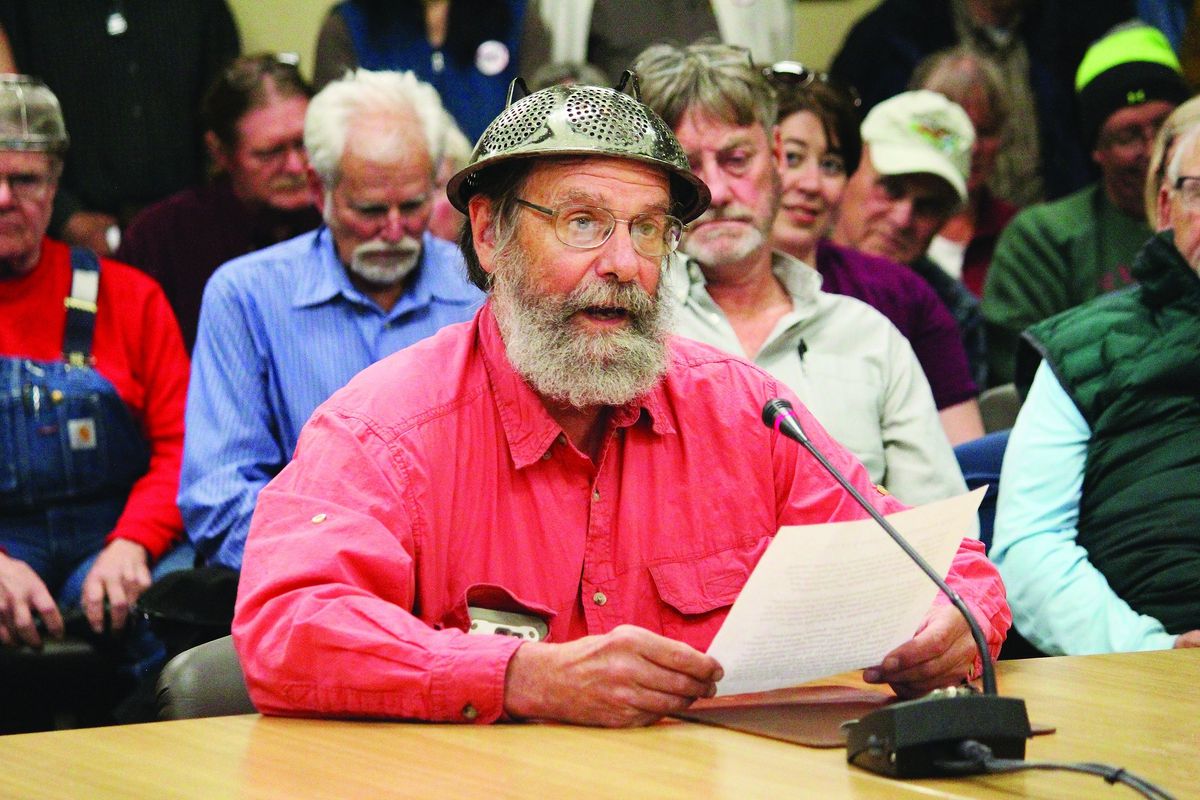 HOMER — A pastor wearing a colander on his head offered the opening prayer on behalf of the Church of the Flying Spaghetti Monster to open a local government meeting in Alaska, the latest blessing from a nontraditional church since a court ruling.

Barrett Fletcher, the Pastafarian pastor, noted the duties performed by the members of the Kenai Peninsula Borough Assembly in his Tuesday message, adding a few of them "seem to feel they can’t do the work without being overseen by a higher authority, " Kenai radio station KSRM reported Wednesday.

“So, I’m called to invoke the power of the true inebriated creator of the universe, the drunken tolerator (sic) of the all lesser and more recent gods, and maintainer of gravity here on earth. May the great Flying Spaghetti Monster rouse himself from his stupor and let his noodly appendages ground each assembly member in their seats,” Fletcher said.

The only people who stood for the invocation were those without seats in the standing-room-only assembly hall in Homer, which is about 125 miles south of Anchorage. One man turned his back to face the wall during the invocation, and other men did not remove their hats.

The Pastafarian invocation followed one in June from Satanic Temple member Iris Fontana that caused about a dozen people to leave the chamber in protest when she invoked “Hail Satan” in her opening prayer.

Fontana was among the plaintiffs in the lawsuit litigated by the American Civil Liberties Union of Alaska against the borough after it approved a 2016 policy saying that people who wanted to give the invocations at the government body's meetings had to belong to official organizations with an established presence on the Kenai Peninsula. Other plaintiffs who had been denied permission to give the invocations included an atheist and a Jewish woman.

The Alaska Supreme Court last October ruled that the borough policy was unconstitutional, and the borough government changed it in November to allow anyone to offer invocations regardless of religion.

The Flying Spaghetti Monster church, called FSM for short, was formed in 2005 as a response to the Kansas State Board of Education’s hearings on evolution in schools. Its founder sent a letter about FSM as a way to argue against teaching creationism in biology classes, the Homer News has reported.

Church followers believe an invisible and undetectable monster made of spaghetti and meatballs created the universe after drinking heavily, and that his “noodly appendages” hold great power. Many label the movement as satire, but it is recognized as an official religion in some countries, the News reported.

Barrett, who started his chapter in Homer, on the lower Kenai Peninsula, concluded his opening prayer as asking the Flying Spaghetti Monster to provide each assembly member "satisfaction in the perception of accomplishment and allow them true relaxation and an ample supply of their favorite beverage at the end of this evening's work."

He then ended the prayer with: “Ramen.”