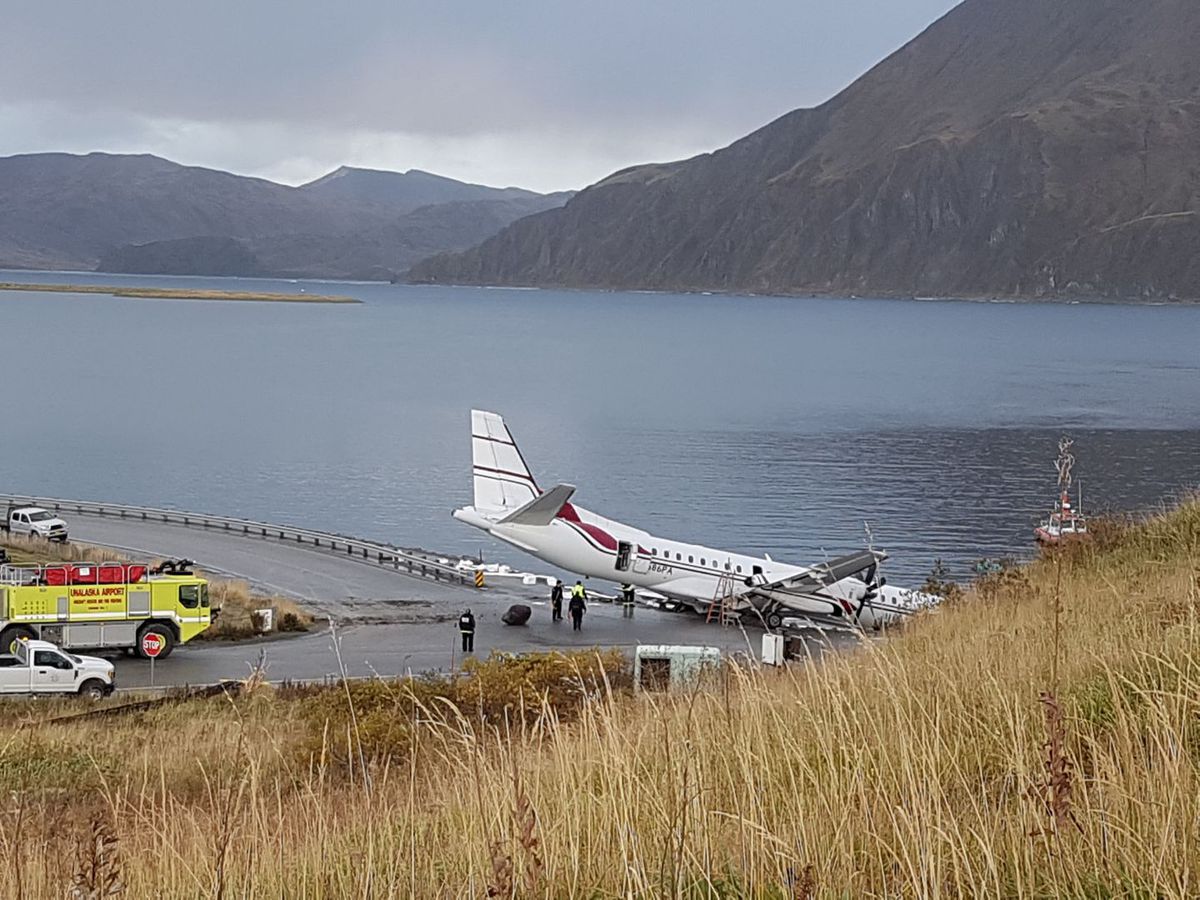 EDITOR’S NOTE: This story has been updated. Read about the latest developments here.

A commuter airplane carrying 42 people, including a high school swim team, to a remote Aleutian Islands fishing community went off the runway and came to a rest just short of the Bering Sea. Two passengers suffered critical injuries and 10 more were receiving medical care, the plane’s operator said.

The swim team was fine after the incident late Thursday afternoon at the airport in Unalaska, which is home to Dutch Harbor, one of the nation's busiest fishing ports, officials said.

The SAAB-Scania 2000 twin engine turboprop plane operated by Peninsula Airways, or PenAir, went off the end of the runway under unknown circumstances, Federal Aviation Administration spokesman Allen Kenitzer said in an email to The Associated Press.

He said local authorities reported three crew members on board in addition to 38 passengers, but the airline said in a statement that 39 passengers were on board.

Unalaska was buffeted by high winds when the plane made its landing, said Jim Paulin, a freelance photographer in Unalaska.

The National Transportation Safety Board said Friday in a statement on Twitter that it was sending a team of nine investigators to Unalaska to start the process of determining why the plane overran the runway. PenAir, which is owned by Ravn Air Group, said it is cooperating with the NTSB and had established a family assistance line.

“Our thoughts and prayers go out to all of our passengers and crew, and the family members of everyone with loved ones on this flight,” said PenAir CEO Dave Pflieger.

An eyewitness said the flight from Anchorage to Dutch Harbor landed about 500 feet (150 meters) beyond the airport, near the water. Images show the plane's nose hanging over a rock embankment, but not in the water.

Some passengers were taken from the airport in an ambulance and others left with the assistance of residents, including families who planned to host the visiting swimmers.

PenAir, which is owned by Ravn Air Group, said it’s fully cooperating with the NTSB and has established a family assistance line. The flight was marketed by Alaska Airlines, which posted on its website: “Right now, our highest priority is the safety and care of everyone who was onboard the flight. Our hearts are with them, their families and employees at PenAir.While the aircraft is operated by PenAir and the crew are PenAir employees, this flight was marketed by Alaska Airlines and the passengers are our guests.”

The swim team was from the Alaska community of Cordova, said Erin Reinders, Unalaska's city manager, who is also her community's swim coach and was at the airport waiting to greet the team from Cordova.

"At present, all students and chaperones are accounted for and are OK, albeit a bit shaken up," said the statement by Cordova Superintendent Alex Russin.

"I spoke again with Superintendent Conwell who stated that the team was together, seemed fine, and were eating pizza. Mr. Conwell assured me repeatedly that the students would be well looked after and taken care of," Russin said.

Unalaska is about 825 miles west of Anchorage.

This story was primarily reported by the Associated Press, with some additional information by the Anchorage Daily News.