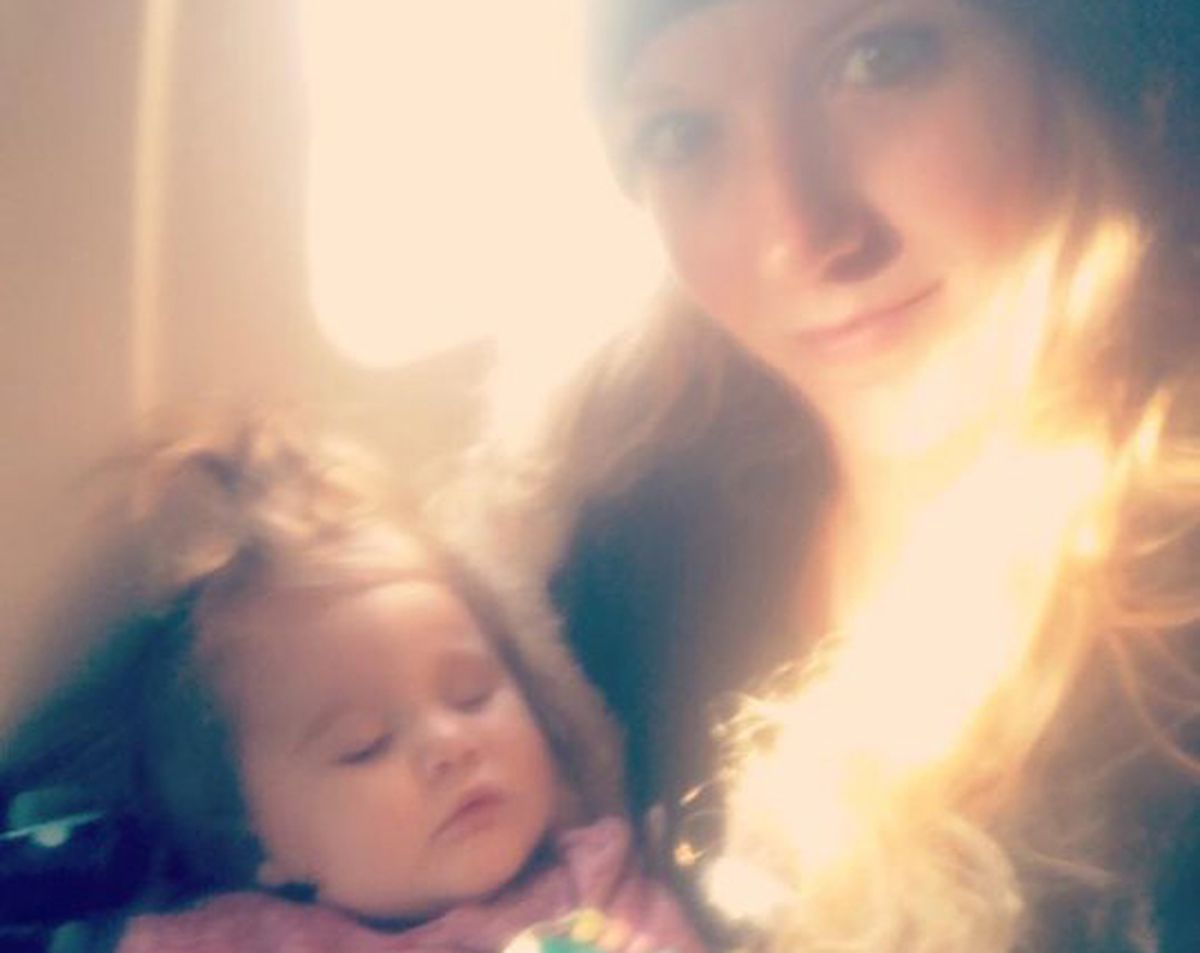 Cody Lee and her 13-month-old daughter Frankie Quinn on a flight to Unalaska Thursday, Oct. 17, 2019. The flight with 42 people on board went off the runway, killing one passenger. (Photo provided by Cody Lee)

Cody Lee and her 13-month-old daughter Frankie Quinn on a flight to Unalaska Thursday, Oct. 17, 2019. The flight with 42 people on board went off the runway, killing one passenger. (Photo provided by Cody Lee)

Cody Lee was raised in Unalaska.

She’s flown into the airport there — known for stormy Aleutian weather and 3,900 feet of usable runway space surrounded by ocean and mountains — countless times in her life, she said.

But she’d never been on a flight like the one Thursday, when a commercial flight from Anchorage carrying 42 people went off the end of Unalaska’s runway, sending propeller blades into the cabin, injuring 10 people and killing a Washington State man.

Lee was in seat 5A, holding her 13-month old daughter Frankie Quinn.

“It was absolutely terrifying,” she said.

Lee, her parents and her daughter were flying home from a family trip to Idaho on Thursday.

The flight, called PenAir 3296, was sold by Alaska Airlines, which handles the marketing of flights to Dutch Harbor. But the carrier is owned by Ravn Air Group.

Some flights to the island had been cancelled due to stormy weather in previous days, she said.

PenAir 3296 was uneventful until the Saab 2000 came in for its first approach in turbulence unusual for even an Unalaska landing.

“I was gripping my baby,” she said. “I was actually afraid of the turbulence.”

Then, the pilot lifted up again and circled. Lee thought the pilot would try the approach from the other end of the runway.

Instead, the pilot started the approach from the same direction.

Lee said she felt the plane was moving faster than normal. Suddenly, her mom yelled to her from another row: “Cover the baby!”

Lee’s instinct was to cradle her daughter, using her body to shield her.

Then she felt a hard, jolting impact: “It was a big, huge bang,” she said.

The Saab 2000’s propellers sliced through the plane in two places, Lee said.

With the plane at the edge of the runway hanging over the water, people started yelling for Lee to get out.

Lee said she was off the plane in what felt like seconds.

“Everyone worked really hard and together” to get passengers, including the Cordova High School swim team, to safety, Lee said.

Lee later learned that the man in the seat in front of her, 38-year-old David Allan Oltman of Wenatchee, Wash., died. Unalaska officials and Alaska State Troopers said he died from “traumatic injuries” he suffered in the crash.

“My heart just breaks for his family,” she said.

After the crash, Lee has had neck and back pain, she said. Her daughter sustained a bruise and a cut on her forehead and forearm. Lee said she’s shaken by what happened, but thankful for her tight-knit community in the aftermath.

She’s also thankful for her mom’s sudden warning. Without it, she wouldn’t have known to cover her daughter. If she hadn’t, heavy bags from the overhead compartments could have struck her.

“We had no warning, there was no announcement to brace for impact,” she said.

Lee said she has questions about why the plane came in for the same approach after the first aborted landing.

“We were going so fast — it just felt wrong,” she said.

The National Transportation Safety Board is investigating the crash. A team arrived in Unalaska on Saturday.

The damaged aircraft was removed from the runway using a crane and barge on Saturday afternoon, according to Unalaska public radio station KUCB. Regular flights to Unalaska are not scheduled to resume until Tuesday, the station said.

Flying is a part of living on a remote Alaska island, Lee said. But it’s hard to think about getting on a plane again, especially with her daughter.

“I don’t want to land here again, that’s for sure.”