What to know as the 2020 census starts in Alaska 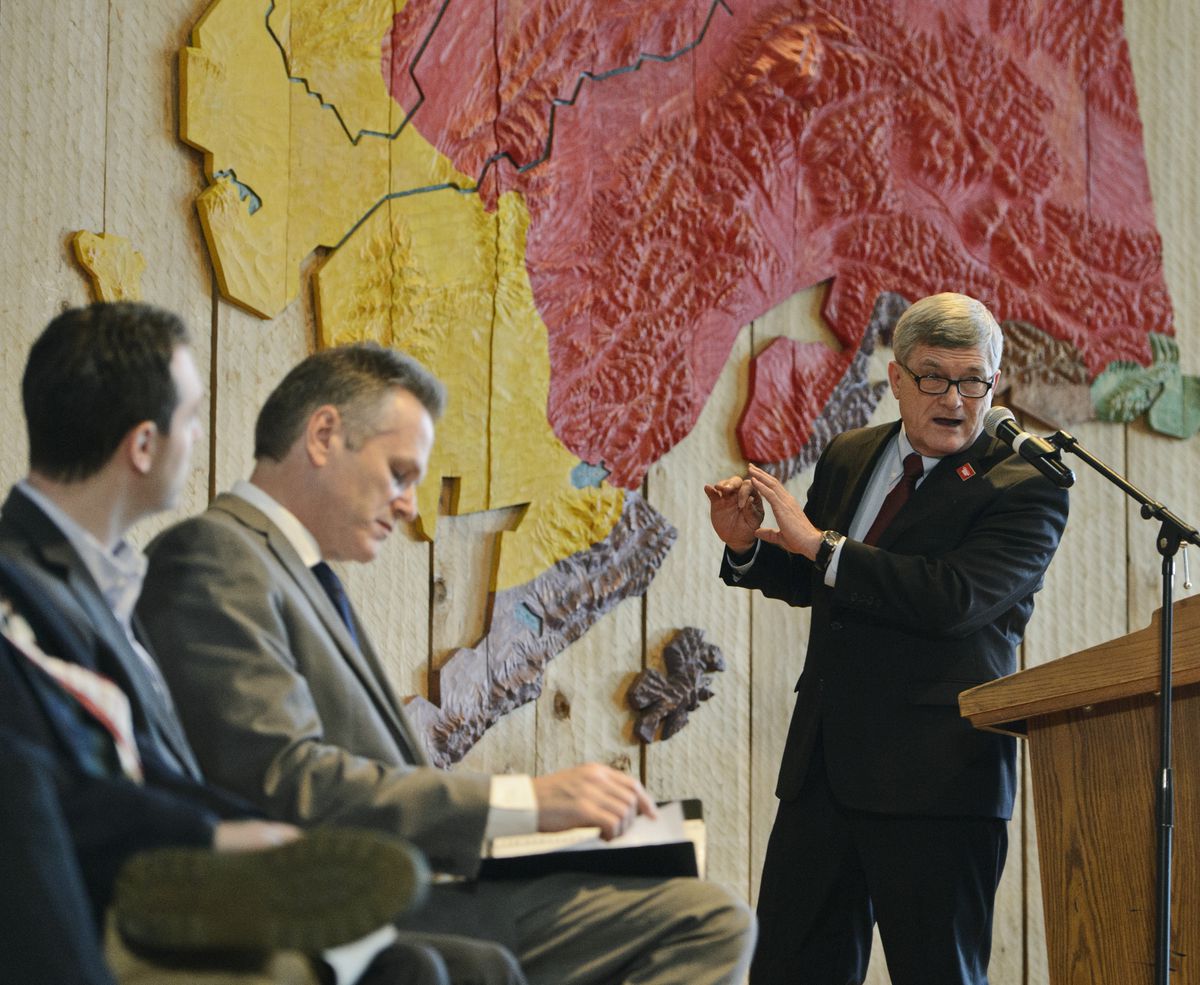 Steven Dillingham, director of the U.S. Census Bureau, refers to a large image of Alaska during his comments Friday. The U.S. Census Bureau held a kickoff event and news conference at Alaska Native Heritage Center in Anchorage on January 17, 2019. The first count of 2020 U.S. Census begins in Toksook Bay on Jan. 21. (Marc Lester / ADN)

Steven Dillingham, director of the U.S. Census Bureau, refers to a large image of Alaska during his comments Friday. The U.S. Census Bureau held a kickoff event and news conference at Alaska Native Heritage Center in Anchorage on January 17, 2019. The first count of 2020 U.S. Census begins in Toksook Bay on Jan. 21. (Marc Lester / ADN)

The 2020 census kicks off Tuesday in Western Alaska. U.S. Census Bureau Director Steven Dillingham will be there to conduct the first count in the Bering Sea community of Toksook Bay. Dillingham planned to spend time Friday at the Alaska Native Cultural Charter School in Anchorage, giving students a lesson on statistics. Additional outreach is planned throughout the weekend.

WHY IS THE 2020 CENSUS STARTING IN ALASKA?

With its sparse population and subzero temperature, rural Alaska can be hard to reach, and some of its villages are accessible only when the ground is frozen. So, the Census Bureau starts the head count in The Last Frontier state by going door-to-door in January — more than two months before the rest of the nation — so it can make sure it reaches villages before the spring thaw, when residents head out to fish and hunt. The state's heritage is traditionally on display during these first counts. In 2000, then-U.S. Census Bureau Director Kenneth Prewitt arrived for the first count in the village of Unalakleet as a passenger in a dog sled. “Our census takers will be using small planes, as I will be in a couple of days, or snowmobiles, which I'm uncertain of. But maybe that's what I'm gonna do as well,” Dillingham told state and Alaska Native leaders during an appearance Friday at the Alaska Native Heritage Center in Anchorage. This year, Alaska Native dancers from Toksook Bay will perform for Dillingham.

WHEN DOES IT START ELSEWHERE?

Residents in the rest of the U.S., as well as the rest of Alaska, can start responding online and by telephone in mid-March. The Census Bureau plans to send out a first round of notices explaining how to participate during the second week of March. It will send up to four more rounds of mailings, including a paper questionnaire, in March and April to households that haven't responded.

WILL SOMEONE BE KNOCKING AT MY DOOR?

WHAT ARE THE QUESTIONS?

IS THERE A CITIZENSHIP QUESTION?

No. The Trump administration tried to add the question, but the U.S. Supreme Court blocked it.

Everyone residing in the United States and the five U.S. territories, including non-citizens and immigrants living in the country illegally. Also included are military personnel temporarily deployed overseas, who are counted at their home addresses in the U.S. “Our goal is count everyone once, only once and to count them in the right place,” Dillingham said.

WILL MY INFORMATION BE SHARED?

No. Under federal law, all responses are kept completely confidential, and they can be used only to produce statistics.

WHY SHOULD I CARE ABOUT THE CENSUS?

Because it is used to determine who your representative in Congress is, where new businesses can build, how crowded your local schools will get over the next decade, and whether highways in your community get money for repairs. The results of the 2020 Census help determine the distribution of $1.5 trillion in federal spending, as well as how many congressional seats each state gets.