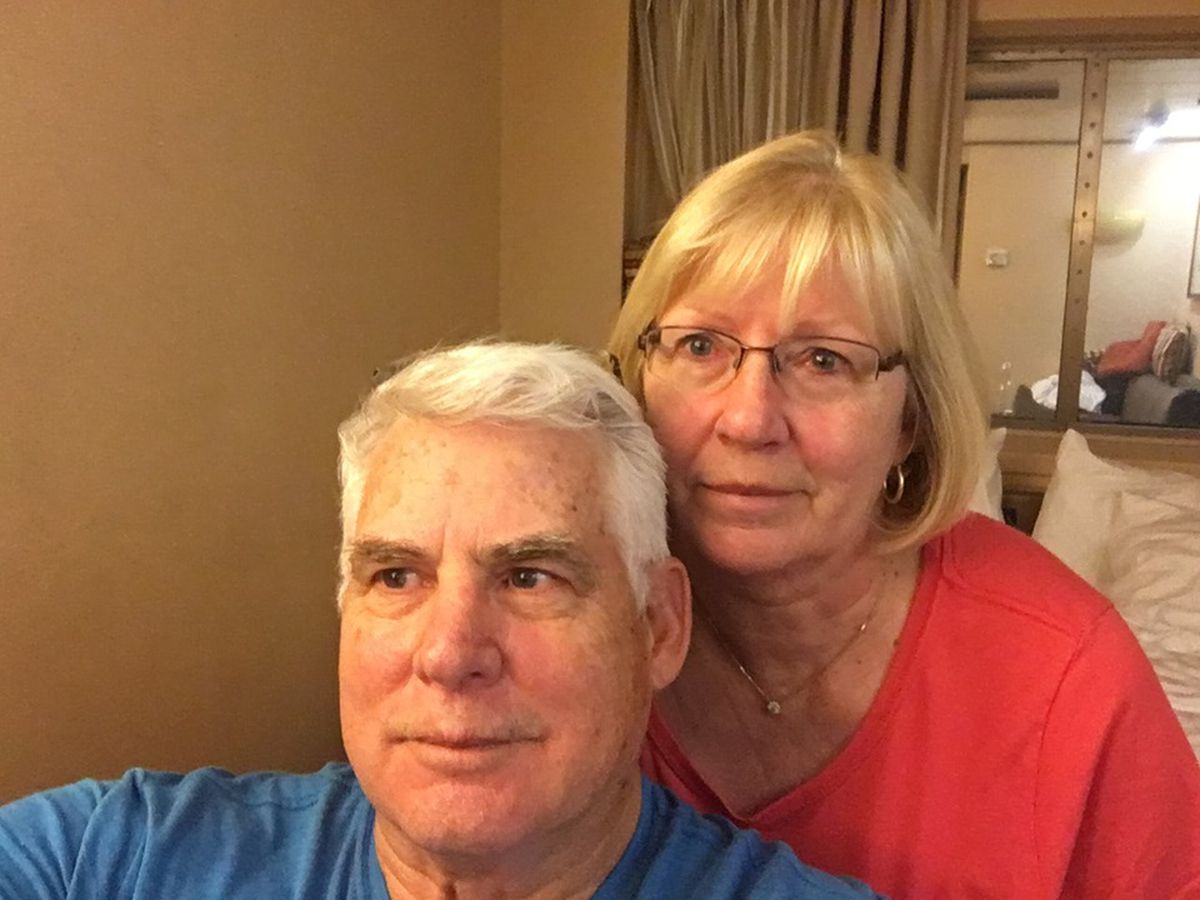 Chuck and Janice Black of Anchorage are quarantined to their rooms on the Holland America Rotterdam cruise ship as COVID-19 concerns spread. The couple was transferred off the beleaguered Zaandam on Sunday. (Courtesy Chuck Black)

Chuck and Janice Black of Anchorage are quarantined to their rooms on the Holland America Rotterdam cruise ship as COVID-19 concerns spread. The couple was transferred off the beleaguered Zaandam on Sunday. (Courtesy Chuck Black)

What started out as a relaxing cruise vacation for two Alaska couples has turned into a nightmare as passengers fall ill and some have died while COVID-19 spreads.

The U.S. Coast Guard announced Sunday that ships must remain sequestered offshore indefinitely and crews should prepare to treat sick passengers on board.

On Thursday morning, there was word that all passengers on the ships would be allowed to disembark in Fort Lauderdale, Florida.

Chuck and Janice Black of Anchorage have been quarantined in a small room for more than a week, first onboard the Holland America Zaandam. Four Zaandam passengers have died and nine people have tested positive for COVID-19. Two of the deaths were confirmed to be caused by the virus.

The Blacks feel fine and were among nearly 1,400 asymptomatic passengers transferred Sunday to a sister ship, the Rotterdam. There are more than 300 Americans aboard the two ships.

Their new room has a balcony, so they can open the door to get fresh air. There’s Wi-Fi, a TV with about six channels, numerous movies and spotty cellphone service.

“We’re self-quarantined. We don’t have a lot of space to move around,” Chuck Black said over the phone Tuesday. “You know, it’s OK. We’re staying away from anybody else. So anybody that might be sick is you know, we’re not socializing at all.”

The couple flew to Buenos Aires and boarded the ship on March 7. At that point, COVID-19 was spreading only near Seattle in America and Black said he never imagined it would take off the way it did. The cruise ship departed a day before the U.S. State Department advised against travel and before statewide restrictions in Florida.

The first week of the cruise was normal -- the couple hopped off the ship at several ports, including the Falkland Islands, where they saw penguins.

Black said it turned into a “mystery cruise,” because it became unclear where or when they would find the next open port.

“We all felt comfortable because there was nobody sick,” he said. “And then on the 22nd is when the captain said that there were several people that had flulike symptoms and they weren’t sure what it was.”

Several days later, they learned that four people had died.

The cruise ship passed through the Panama Canal on Monday, and passengers have been waiting to find out if they will be allowed to disembark at Fort Lauderdale, Florida, where they were originally expected to dock April 7.

Florida’s governor originally refused permission, saying that local hospitals are already at capacity with no way to care for the more than 190 passengers still on the Zaandam who say they are sick.

“They’re dying on the ship,” he said. “I’m going to do what’s right. Not only for us, but for humanity.”

Black said they’re doing fine but they’re ready to begin to quarantine on land. Their son, Charles Black of Arizona, has been asking lawmakers for help.

“It’s a humanitarian problem now,” Charles Black said. “This isn’t about who got on a cruise or who didn’t; this is about getting people home.”

Another ship, the Coral Princess, is also headed toward Florida with an Alaska couple aboard. Dave and Susie Schaefer are quarantined in their rooms and hoping to get home to Wasilla.

But first, the Coral Princess has to get to Florida -- and then passengers have to be able to disembark and get a flight out.

Their 32-day cruise started March 5 in Chile, Susie Schaefer said by phone Tuesday. Everything was fine onboard for weeks.

Everyone was interviewed and tested before they started the trip. On what turned out to be their last shore excursion in mid-March, the couple also saw penguins in the Falkland Islands.

Then various ports refused to let the ship dock. About half the passengers -- many from South America -- got off in Buenos Aires, where people wearing hazmat suits and carrying weapons patrolled the dock, Schaefer said. The captain hoped to let off everyone else in Rio de Janeiro, but pulled anchor and steamed away after a pilot boat failed to arrive and communications faltered.

Until a few days ago, she said, everyone aboard was doing fine and life was normal: buffet meals, big shows, games.

Then Tuesday, the captain announced over the intercom the medical unit was seeing a surge in people with respiratory or flulike symptoms. He closed buffets and shipboard activities.

A few hours later, another announcement: Yet more cases were surfacing. Passengers were ordered to quarantine in their rooms.

By Tuesday evening, Schaefer said, they were waiting on room-service dinner and looking at Barbados from their balcony.

They’re hoping to get to Port Everglades in Florida on Saturday.

“But we don’t know what’s waiting for us there. We’re very much aware of the two Holland America ships,” she said. “It’s the uncertainty that’s so hard, it really is. Just not knowing.”