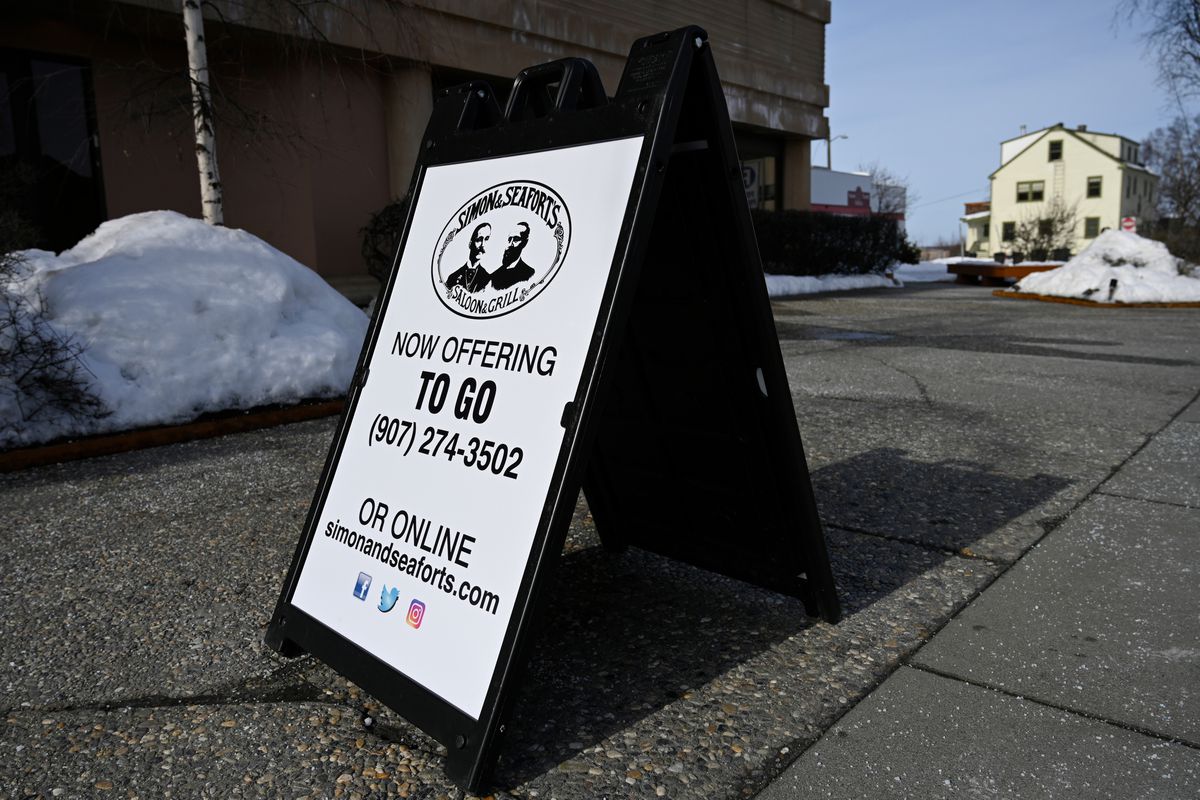 A sign on L Street in downtown Anchorage advertises to-go meals for Simon and Seafort's Saloon and Grill on March 20, 2020. (Marc Lester / ADN)

A sign on L Street in downtown Anchorage advertises to-go meals for Simon and Seafort's Saloon and Grill on March 20, 2020. (Marc Lester / ADN)

Gov. Mike Dunleavy accelerated his timeline to open up segments of the economy, announcing Tuesday night that under certain restrictions, barbershops, tattoo parlors, nail salons and tanning salons can open starting Friday, allowing one customer in at a time.

“We’re going to give these businesses an opportunity to be open, and really it’s one provider, one client, no waiting room," Alaska Department of Health and Social Services Commissioner Adam Crum said.

Restaurants can open up for dine-in service, but with reservations. They can have up to 25% capacity. Retail stores will be allowed to open for limited shopping, operating at 25% capacity with hand sanitizer at the entrance. Bars, bingo parlors and bowling alleys cannot open yet, state officials said.

The changes are not yet posted on state websites or in public documents, though state officials said more information will be released this week.

Some mandates were extended. International and out-of-state travel restrictions were extended to May 19 and social distancing requirements are extended until further notice.

Dunleavy said Anchorage will follow in the state’s path, opening the same businesses on Monday.

Following the public briefing, Anchorage Mayor Ethan Berkowitz was not available for comment, but did release a statement.

“We will have protocols in place later this week. Provided that the health metrics continue to meet expectations, certain Anchorage businesses may start operating, with safety provisions in place, as soon as Monday, April 27, 2020," the statement said.

That runs contrary to what Berkowitz has said in his last several community briefings. On Monday, Berkowitz said there is not a date set to reopen the city. Rather, the city would look at metrics to decide when there has been a 14-day downward trend in cases.

[Earlier coverage: Anchorage unveils a plan to move on from the ‘hunker down’ coronavirus order]

When asked Tuesday what would define a downward trend, Anchorage Municipal Manager and coronavirus incident commander Bill Falsey said the city was still deciding that.

When asked if his announcement conflicts with local governments that have emergency orders keeping businesses closed, Dunleavy said the decision was made in concert with Berkowitz.

“We don’t believe they are more strict, because our teams have been working together,” Dunleavy said.

“We don’t see right now any differences. I guess we are going to have to wait and see if there is any misunderstanding.”

Dunleavy said the state does not plan to follow people around, surveilling them. Alaskans have already shown an ability to follow rules during the pandemic, he said.

“I’m less concerned about that than I am about making sure we are following the data,” he said.

The next round of restriction-lifting at the state level is scheduled for May 8. Dunleavy said so far, the case rate and death rate have been better in Alaska than officials originally projected.

“Our numbers are the lowest in the country,” Dunleavy said Tuesday during a nightly public address.

The announcement veered from the governor’s message the night before, when he said things could open up as soon as early next week, contingent on a 14-day downward trend.

“If we have these cases, like today where we have quite a few more than yesterday, we don’t want to make big decisions based on these fluctuation,” Zink said. “We want to make sure we are taking in all the data.”

Alaska saw eight new cases of COVID-19 on Monday. The tally includes four Anchorage residents, two Juneau residents, one Eagle River resident and one Ketchikan resident, according to numbers released by the Alaska Department of Health and Social Services on Tuesday.

A total of 168 people statewide had recovered from COVID-19 as of Monday, while no new deaths or hospitalizations from the illness were reported. The state reports positive cases based on test results from the previous day.

The hunker down phase helped the state build up testing and hospital capacity, Zink said. And now, she said, using those “new tools,” it’s time to start moving forward, slowly and cautiously.

“We also have to be thinking about the whole health of Alaska,” Zink said. “And we know that’s mental health, physical health, economic health.”

Zink said that everyone should pick their own level of comfort, and said that for those who may be more vulnerable to the virus, “it makes sense to go even slower and to make sure that you are protected.”

There’s no vaccine, so the illness will be around for some time, Zink said.

“This disease is not going to disappear from the world next month, or even three months from now if we hunker down that long, and so we have to find a way to move forward,” she said.

If there is a surge in cases, the state will put restrictions back in place, Dunleavy said.

Zink said it will depend on the type of cases -- community-spread cases will be treated more seriously than cases for people already in quarantine, or cases that are believed to be the result of travel.

Also, she said, they will look at the rate of an increase. The faster the number of positive cases goes up, the greater the chance it has to explode.

“Once you start to get in that exponential growth curve, you can go from having a few cases to being completely overwhelmed with cases in a short period of time,” Zink said.