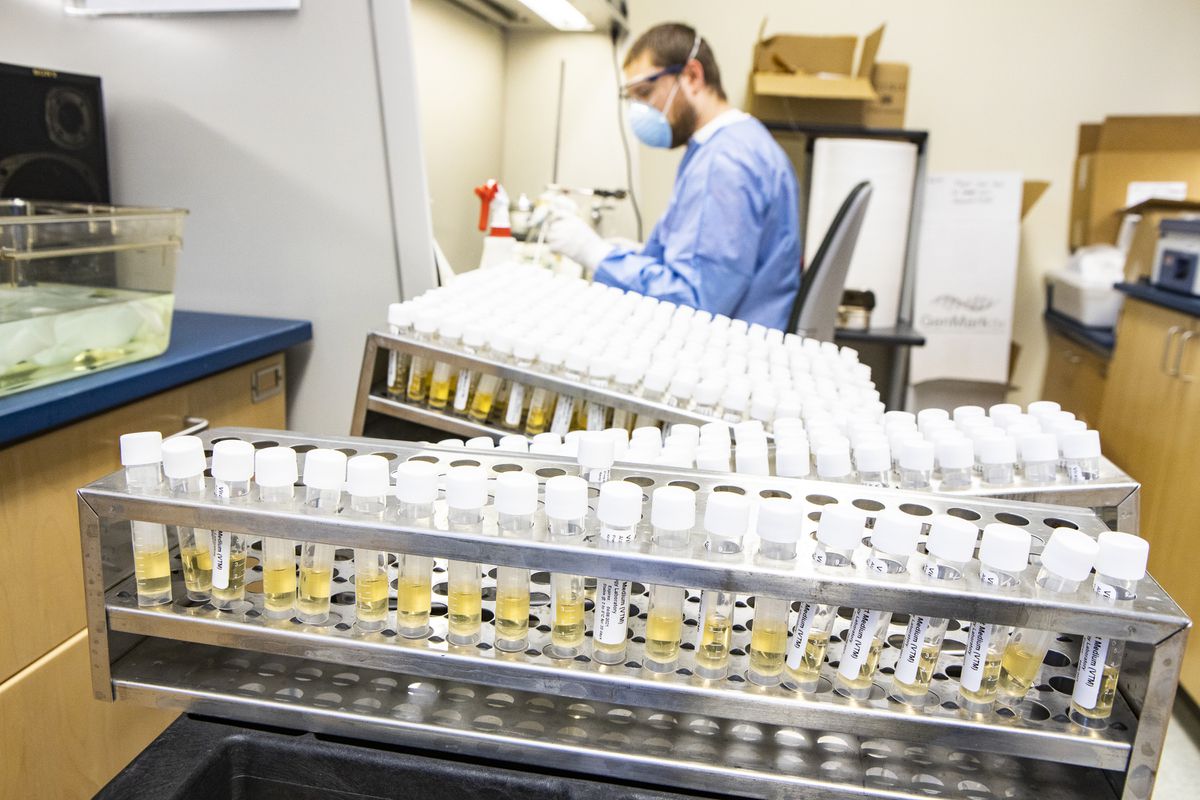 Almost two-thirds of the state’s nearly 340 confirmed cases have recovered. Since early March, only 36 people have been hospitalized with a positive diagnosis.

Tracking the spread of COVID-19 here is more important than ever now that residents are emerging and running the risk of overloading hospitals as beds fill with next month’s resumption of elective surgeries.

That testing rate is just above the national average. At about 1.6%, it’s nowhere near a level that could be considered widespread.

Communities are testing at wildly different rates. The state’s more urban areas of Anchorage and Fairbanks this week had tested 1.8% and 1.5% of residents, though Mat-Su (the second largest municipality in the state) was only at 0.81% — up from prior weeks, according to Alaska Department of Health and Social Services data.

A similar situation is occurring in more remote parts of Alaska: Nome was testing above 2% but Dillingham, a community with a 16-bed hospital in a region expecting thousands of salmon fishermen and workers next month, was at just 0.57%.

A graph of the tests performed in Alaska daily looks like a cat playing with string: a seesaw of peaks and dips rather than a smooth upward curve.

“The main issue is we’re not getting people to get tested,” said Dr. Bernd Jilly, the Anchorage-based chief of the state’s public health laboratories.

Jilly cited several factors, including the cost of testing at drive-up facilities, though public-health clinics now have collection materials and Fred Meyer is setting up parking lot collection sites staffed by public-health workers.

For weeks, Alaska joined the rest of the country in a mad scramble for the test kits, swabs and reagents necessary to carry out tests in the first place.

This week, doctors and health officials interviewed for this story said the supply chain has improved to some extent, but the rapid testing Abbott machines are still an “acute” issue, as Jilly put it. Reagents to process tests are also hard to get because they’re specialized products with rigorous quality control measures needed.

“There are still other issues with just about everything,” he said. “Everybody is testing everything. There’s only so much these manufacturers can push out.”

All of Anchorage’s hospitals are testing health care workers with COVID symptoms. Some are using or plan to use Abbott rapid testing machines in coming days. Southcentral Foundation is testing asymptomatic employees as well as their immediate household members. Alaska Native Medical Center is testing employees without symptoms.

“As our communities reconsider reopening many services that will undoubtedly result in more opportunity for the virus to spread, we are strongly encouraging everyone to get tested,” Alaska Native Tribal Health Consortium spokeswoman Shirley Young said in an email.

The state is still waiting to see how accurate the Abbott machines are, Jilly said. A few weeks ago, the machines were showing “significant false negatives” but the company increased sensitivity more recently, he said.

The state public health lab is double-checking those results.

“We’re still recommending to folks to send us their negatives for a while because we need to see the lay of the land here," Jilly said.

‘Lots of people have it, if we have it'

Despite the state’s push for more results, some people who think they might have the virus are still reporting problems getting tested.

Melissa Janigo and her 18-year-old daughter came down with possible COVID-19 symptoms almost two weeks ago. A nurse responding to the daughter’s call to the Alaska 211 helpline late last week discouraged a test even though she lived with several family members, Janigo said.

The family didn’t realize that the state had already loosened guidelines and officials were urging anyone with even mild symptoms to get tested.

“The nurse basically said, ‘Yeah, in a perfect world you could get tested but it’s not,’” Janigo said. “'You’re not at risk and you don’t have complications.' ... They did not want to test her.”

Janigo said she probably won’t get tested given the information her daughter received and the fact that she’ll have to pay out of pocket.

“We have disrupted everybody’s lives for this and we’re doing ... everything we’re supposed to do," she said. "If we’re going to open up, lots of people have it, if we have it it. But we don’t know.”

Testing is crucial to epidemiologists trying to build a picture of the presence and pathways of the novel coronavirus in Alaska.

It’s also important to test -- and isolate -- infected people without symptoms who could spread COVID-19 before they know they’re sick, officials say.

The state is starting to test asymptomatic people in long-term care facilities, especially if they aren’t able to describe how they feel, Zink said. She also expects to see more asymptomatic people test positive as medical providers do required pre-operative testing before non-urgent procedures resume on May 4.

All 73 residents were tested last month at a Fairbanks care center after one tested COVID-positive, she said. Other residents tested positive, even those without symptoms.

“Some of them then became symptomatic, some did not," she said.

But Alaska isn’t set up to test people without symptoms on a wide scale yet.

At Capstone Medical Center’s two testing facilities in Palmer and Wasilla, the drive-up was busy testing people with COVID symptoms after the state relaxed test standards.

“The most phone calls I get are, ‘Well, I know somebody who got sick and I don’t have symptoms and I wanted to get tested,'" said Dr. Wade Erickson, Capstone’s medical director. "Right now that’s not one of the criteria, but it will be eventually.”

The accuracy of testing for people without symptoms is still improving, however.

Many physicians including Erickson have warned against high confidence in testing Alaskans without symptoms because their low “viral load” might not trigger a positive reading right away, leading to a false negative result.

That’s why wearing face masks is so important, they say.

The limited power of testing

Larger concerns surround the antibody testing that’s just starting to be available in Alaska. The testing looks for proteins that may indicate immunity, though some recovered COVID patients in China are testing positive again.

But antibody testing may actually do more harm than good until accuracy improves -- especially in places like Alaska where there’s not a huge amount of the virus circulating, several physicians said.

A 99.5% accurate antibody test will still only have a 77% chance of an accurate positive result in a population with relatively low amounts of the virus, according to a presentation on a Santa Clara County study by UCLA emergency medicine professor Dr. David Schriger.

With that high level of accuracy, a negative result is probably right, but a quarter of the positive readings will be wrong, leading people to think they’re immune when they might not be.

Most rapid antibody tests are estimated as 50% to 80% accurate, Schriger said.

“But I do hope that the state continues to try to gather more data so that the next steps are made with increasing understanding of disease prevalence and transmission rates," Elsberg said in an email. "Our data is definitely quite thin at this point.”