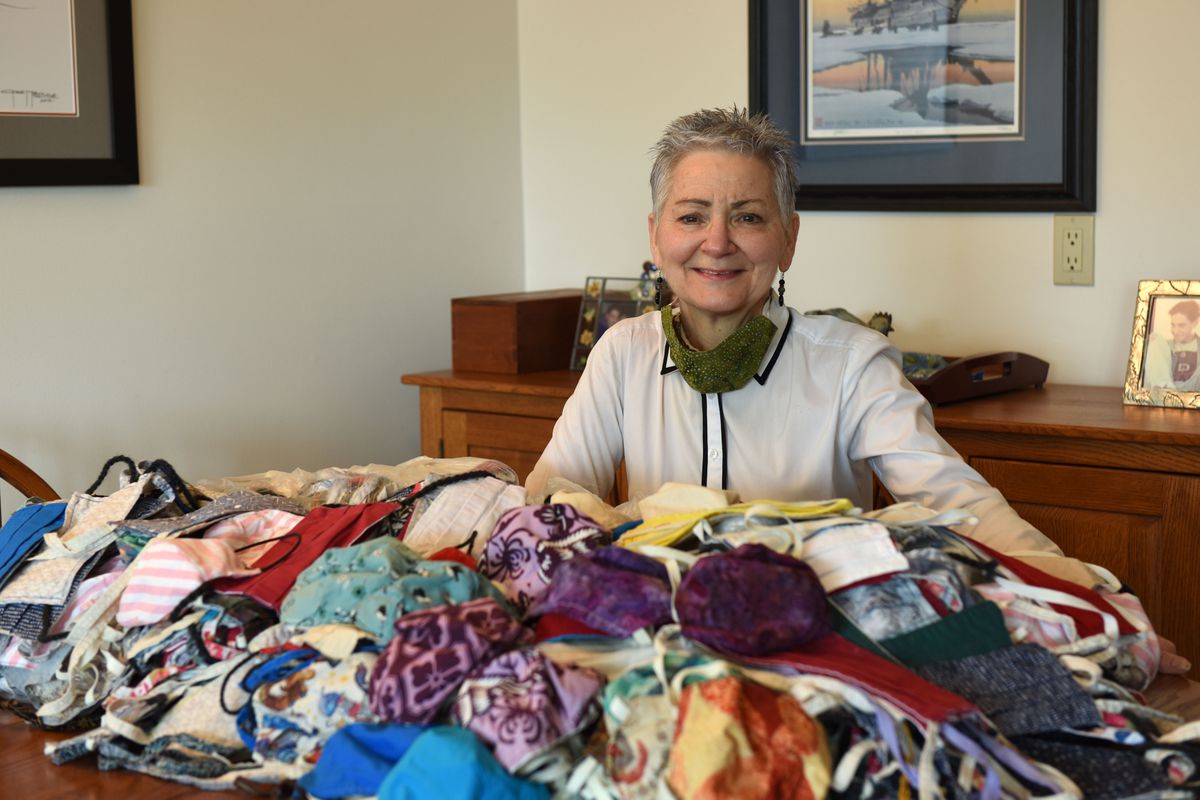 Diane Casto, executive director of the Alaska Council on Domestic Violence and Sexual Assault, in her office with masks donated by the Department of Corrections for distribution to agencies that provide shelter and services to domestic violence and sexual assault survivors. About 80% of Alaska shelters have a shortage of personal protective equipment and cleaning supplies, she said. (Photo by Joel M. Casto)

Diane Casto, executive director of the Alaska Council on Domestic Violence and Sexual Assault, in her office with masks donated by the Department of Corrections for distribution to agencies that provide shelter and services to domestic violence and sexual assault survivors. About 80% of Alaska shelters have a shortage of personal protective equipment and cleaning supplies, she said. (Photo by Joel M. Casto)

Alaska organizations serving domestic violence and sexual assault victims have experienced a surge in hotline calls as residents hunker down during the coronavirus pandemic.

That’s according to Alaska’s Council on Domestic Violence and Sexual Assault, housed within the Department of Public Safety. The council this week released the results of a survey of 30 shelter providers, covering the period from March 11 to April 24.

Hotline calls jumped by 52% during that period compared to weeks before the statewide health emergency declared March 11. As calls for help surged, shelters cut their capacity by 57% to provide for safe social distancing recommended by the U.S. Centers for Disease Control and Prevention. Instead of having four people to a room in bunk beds, for example, many shelters limited their capacity to one person per room.

While shelter operators had to trim the number of clients they could admit, they provided other options including hotel rooms and safe houses. Use of alternative housing increased 60%, according to the survey.

Providers also offered more computer-based help. Use of online tools climbed from 24% before the emergency to 65% during the reporting period, the survey indicates.

“They realized they had to make quick changes to how they conduct business,” said Diane Casto, the council’s executive director.

While the use of video-conferencing and telephone options has helped, many children staying at shelters are having trouble keeping up with schoolwork. Fifty-three percent of shelters reported that children were struggling with distance learning.

In some cases, it’s the lack of computers, tablets or high-speed internet. Online learning can also require a dedicated parent or caregiver to oversee the child’s progress. When the adult is in crisis, they might not be able to prioritize their child’s education.

One of the council’s board members, an assistant commissioner in the Alaska Department of Education and Early Development, is working to get more laptops and tablets available to shelters, Casto said.

Some regions of Alaska seem to be experiencing an uptick in demand or services while others are seeing a drop, according to the survey. The Southcentral region, which includes Wasilla, Palmer and the Kenai Peninsula, reported a 63% increase in the demand for agency services. The western region experienced a 50% increase. In contrast, Anchorage saw a 67% drop.

Morgan Cruz-Erisman, who crunched the data, noted the survey’s limitations because of the small sample size and the short time frame covered. But she and Casto said it still provides a useful snapshot of what is happening inside unsafe homes during a public health emergency.

“The real picture of how stay-at-home orders have impacted domestic and sexual violence in Alaska won't be truly understood until after communities begin opening up, people go back to work and victims are able to make reports and seek services again, without their perpetrator watching and limiting their movement and ability to reach out,” Casto said.

Although shelter space may be limited, all programs are fully operational and anyone who feels unsafe where they are staying should seek assistance, Casto said.

For a listing of all local victim services’ 24/7 hotlines, visit dps.alaska.gov/CDVSA/Services/VictimServices.