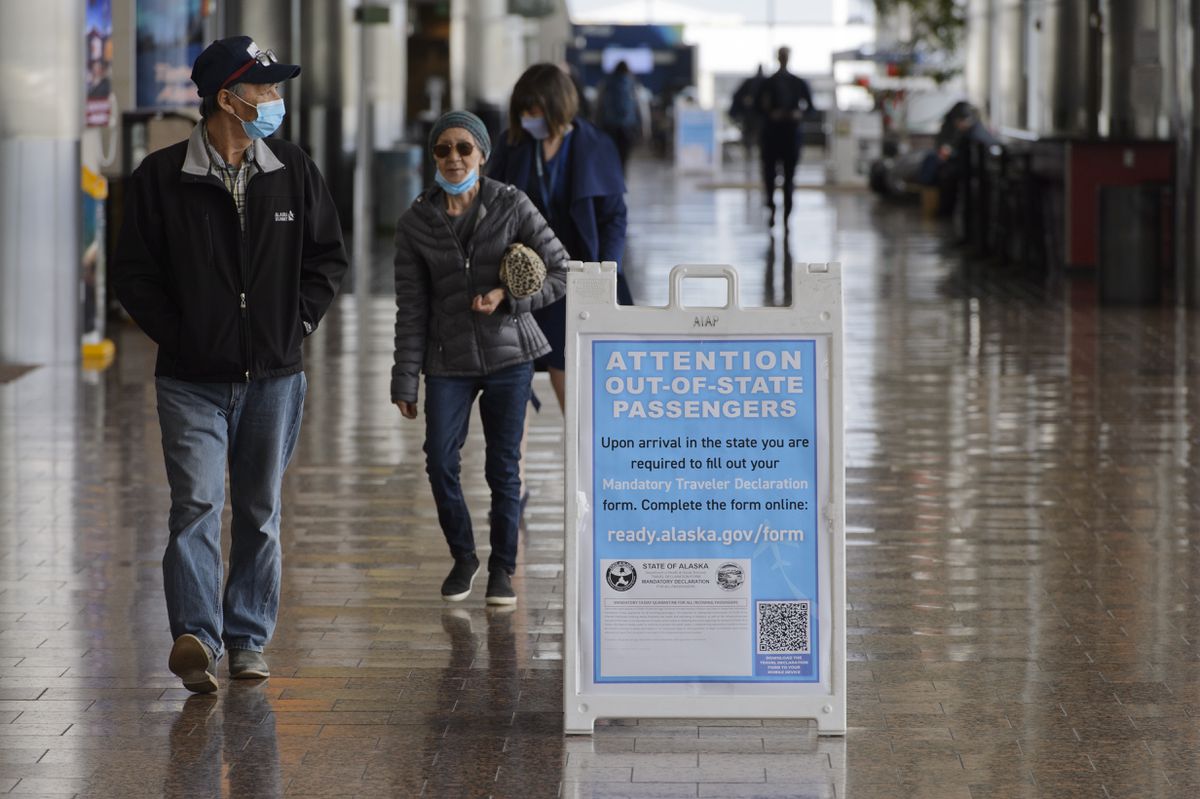 A sign gives travelers from out-of-state instructions to fill out a declaration online at Ted Stevens Anchorage International Airport on May 11, 2020. (Marc Lester / ADN)

A sign gives travelers from out-of-state instructions to fill out a declaration online at Ted Stevens Anchorage International Airport on May 11, 2020. (Marc Lester / ADN)

Alaska’s 14-day coronavirus quarantine mandate is strict on paper: Come to Alaska, go straight to your home or quarantine lodging and stay there for two weeks. Do not enter “any public space.” Have food or groceries delivered to your door.

But the quarantine mandate, a hallmark of the official plan to keep coronavirus numbers low in the state, largely rests on people voluntarily following it.

Unlike Hawaii, another non-contiguous U.S. state operating under stringent intrastate travel policies during the coronavirus pandemic, Alaska is not aggressively enforcing its quarantine rule.

“While we have heard there are violations, we just can’t go out there and police every person in the state of Alaska,” said Jeremy Zidek, of the state Department of Homeland Security and Emergency Management. “We really need people to voluntarily abide by these mandates, not because the government is telling them to do it.”

More than 2,000 people arriving in Alaska have submitted quarantine plans to the state online since March, according to state emergency management officials. Additional people submitted travel declaration forms on paper, but the state wasn’t able to say how many.

No one has been fined, cited or prosecuted for breaking the quarantine, officials said.

Now, with COVID-19 cases flat and the state’s phased reopening plan progressing, businesspeople and travelers want to know the future of the travel mandate.

Gov. Mike Dunleavy issued the order, known as Health Mandate 10, on March 23 and renewed it about a month later. The quarantine order is currently in place until May 19.

“Nobody is going to come to Alaska and quarantine themselves for 14 days before doing something,” said Richard Yamada, the president of the Alaska Charter Association and the owner of Shelter Lodge, near Juneau. “That’s a no-brainer.”

Industry by industry, employer by employer, the mandate is being interpreted differently. Fishermen in Unalaska have been given the go-ahead to quarantine onboard their boats. Oil workers coming into the state mostly must spend two weeks in Anchorage hotels before flying to North Slope facilities.

But for independent travelers or returning residents, the policy largely relies on cooperation.

Unlike Hawaii, where police have used tips to track down and arrest tourists who’ve broken quarantine, Alaska has been taking a softer approach to enforcement.

People should follow the rules because it’s the right thing to do, he said. The travel declaration forms are crucial for contact tracing investigations, Zidek said. And following quarantine is a way to keep the virus from circulating in a state where case numbers and hospitalizations have been among the lowest in the country.

“We don’t want to fine any Alaskans,” Zidek said. “We need every Alaskan to do their part.”

The process of extracting personal information and a quarantine plan from arriving travelers also leans on honesty and voluntary participation.

“There’s a focus on educating people on what the expectations are,” said Meadow Bailey, a Department of Transportation spokeswoman.

At first, the state set up tables with paper “travel declaration” forms at the four airports where people having been flying into the state from Outside: Anchorage, Juneau, Ketchikan and Fairbanks, according to transportation and emergency management officials.

Passengers stepping off a flight and into the terminal would walk by tables and forms as they exited, and hear announcements warning them that filling out a form is mandatory.

Initially, government representatives sat in the airport to “answer questions” but not to force passengers filling out the forms, Zidek said.

But in mid-April, the paper forms were removed because of “concern that people were getting close and interacting,” while filling out the forms, Zidek said.

Now, people are asked during pre-boarding announcements and in the airport to fill out the form online.

In March, 353 people electronically submitted quarantine forms, according to numbers provided by the state. In April, 1,934 did.

For May, 864 had as of May 5, according to the department. Those numbers don’t include any of the paper forms submitted at airports in March and April.

The travel declaration asks for a quarantine address, phone number and a list of all the places the person has been within the previous 14 days, “under the penalty of perjury.”

The state isn’t actively checking that people are following their stated quarantine plans, according to Zidek.

People can report suspected quarantine violations to investigations@alaska.gov. Officials have not yet responded to a request for details of emails sent to the violations address, or how many investigations had been launched.

Hawaii’s stringent quarantine does not rely on voluntary cooperation.

In Hawaii, passengers step off trans-Pacific flights to be greeted by airport temperature screeners. They must then fill out a quarantine form. An airport representative calls the cellphone number they’ve provided in front of them, to make sure it’s a real number, according to a statement from Hawaii state officials.

“If the person refuses to provide a phone number that can be answered on the spot, law enforcement is contacted and they are subject to citation and arrest,” the statement says.

Then the airport worker calls the hotel the traveler says they are staying in to make sure they have a reservation. Home rentals are not a workaround: Tourists aren’t allowed to quarantine in an Airbnb, and hosts can be punished.

“This is a warning to all vacation rentals in the state to stop accepting visitor reservations,” Hawaii officials said. “The government will have their address and they will be subject to enforcement for operating illegally.”

Hawaii has been just as aggressive about enforcing the quarantine rules.

In one publicized case, newlyweds who’d gone out to pick up take-out pizza were arrested for flouting the rules. A hotel desk clerk had called authorities about the couple.

Many people flying to Alaska to work are covered under the quarantine plans submitted by their employers. Those vary too.

ConocoPhillips and BP are both having employees that travel from Outside the state quarantine at hotels in Anchorage before traveling to work on the North Slope.

But the two companies are interpreting the quarantine mandate differently: BP employees are allowed to leave their hotel rooms for exercise, according to spokeswoman Meg Baldino.

“Workers are required to fill out a daily health log, including twice daily temperature checks,” she wrote in an email. “They can leave hotel room for outside fresh air and exercise. Otherwise we ask that they stay in their rooms, wear masks if they go out and social distance at all times.”

ConocoPhillips employees must stay in their rooms for the duration of the two-week quarantine, said spokeswoman Natalie Lowman.

“Our interpretation of the State Mandate 10 regarding quarantine for anyone who has traveled out of state, is that they are not allowed to leave the hotel room for exercise,” she wrote. “They would be allowed to leave for medical emergencies.”

Hilcorp did not respond to questions about its 14-day quarantine policy for workers.

Fishermen arriving in Alaska on their boats have been advised of the quarantine mandate by harbormasters, Zidek said. Seafood processing companies have also used hotel rooms or their own bunkhouses to quarantine their employees.

Ocean Beauty Seafoods, which plans to bring more than 100 workers to its processing facilities, including one in Cordova, tests its workers in Seattle before they fly to the state and then quarantines employees in bunkhouses, its president and CEO said last week. One quarantined employee who’d been working as a machinist during his 14-day period tested positive last week.

Some business owners just want to know what’s next in order to make plans.

“As long as the 14-day quarantine is in place we’re dead in the water to operate,” said Theresa Weiser, a lodge owner and charter operator in Sitka.

She can’t operate until it is lifted, because most of her Wild Strawberry Lodge’s roughly 1,200 typical yearly customers -- virtually all of whom come from Outside -- only stay three or four days. Nearly half have already canceled. She’d like the state to announce sooner rather than later if her season can be salvaged, she said.

“I just want them to tell us, one way or the other,” she said. “I’d like to know what’s going to happen.”