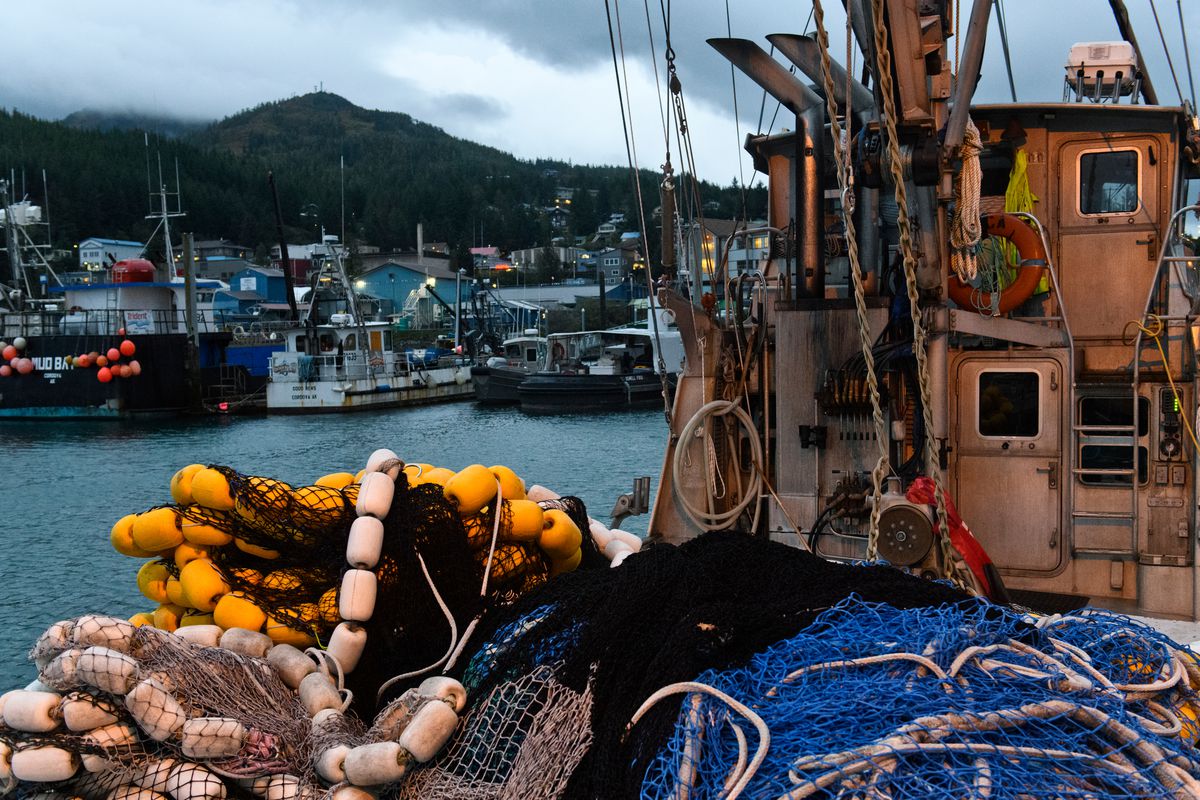 Fishing boats piled with nets take up much of the Cordova boat harbor on September 17, 2019. (Marc Lester / ADN)

Fishing boats piled with nets take up much of the Cordova boat harbor on September 17, 2019. (Marc Lester / ADN)

Cordova’s first positive case of the new coronavirus is an Ocean Beauty Seafoods worker who had recently traveled to the Prince William Sound community from outside of Alaska, officials announced Wednesday.

The worker was asymptomatic, but his case was caught by his company’s routine testing of employees, said Mark Palmer, the president of Ocean Beauty Seafoods, in a KLAM radio briefing Wednesday afternoon.

The worker, who arrived in Alaska two weeks ago from the Lower 48, tested positive for COVID-19 on Tuesday night.

“This person showed no signs of illness,” Palmer said. “But our testing procedure caught that person.”

The worker has been cooperative and is in isolation, said Hannah Sanders, director of the Cordova Community Medical Center, on the radio call.

Palmer’s description offers a window into how one corporate entity is approaching the fraught issue of how to safely staff summer operations, a major concern for local Cordovans who have been vocal about fears an influx of summer fishery workers could cause an outbreak in their isolated town, which lacks a hospital that can treat seriously ill patients.

Cordova’s Copper River salmon fishery opens May 14, the first big commercial salmon fishery of the season in Alaska, and fishermen and processors have been streaming into town to prepare.

In the call Wednesday, Ocean Beauty Seafoods executive Palmer described how the company first tests all Alaska-bound workers in Seattle.

Ocean Beauty is a Seattle-based company that operates several processing plants around the state. In Cordova, the company produces fresh, frozen and canned salmon. They hire about 50 people to handle the Copper River fishery for a month and then 200 people for the rest of the summer for other higher-volume Prince William Sound salmon fisheries.

Most of the 15 employees working for Ocean Beauty in Cordova right now are people “doing construction, machinists,” and others preparing equipment for cannery operations, according to Palmer.

The company’s testing started in Seattle. First, workers are taken to a hotel where the seafood company has “secured 100 rooms,” Palmer said. A private company sends a nurse to give workers a test, and the workers must wait in the hotel until they have a negative test result before their travel arrangements to Alaska are made, Palmer said.

“We thought if there’s a way to catch the disease before we ever put them on a plane, before they ever leave Seattle, we would like to filter out as many of these as possible before they ever arrive in Alaska,” he said.

After a flight to Alaska, “we pick them up from the airport, go to the facility, put them in their bunkhouse and our policy is that for the season they will be quarantined there. They won’t leave the property,” he said.

The worker who tested positive took their initial test in Seattle on April 20, said Palmer in an email. The person arrived in Cordova on April 22.

A second test happened in Cordova nine days later, on May 1, he said. Notification that the person was positive came back on Tuesday, May 5.

The person who tested positive had worked as a machinist, Palmer said by email.

When the positive test came back, "we quarantined 100 percent of the employees on site,” he said. All are in individual rooms in a bunkhouse.

The question of how — or where — the person contracted COVID-19 remains unanswered.

Louisa Castrodale, an epidemiologist with the state Department of Health and Social Services, said the department was “still actively investigating” the case and any contacts the worker may have had. Free testing is available for anyone arriving in Cordova within the last 14 days — for fishing or not.

Mayor Clay Koplin said hearing of an anticipated but dreaded first case “feels a little like a punch in the gut” but said he was impressed with the planning and coordination that allowed for a quick response.