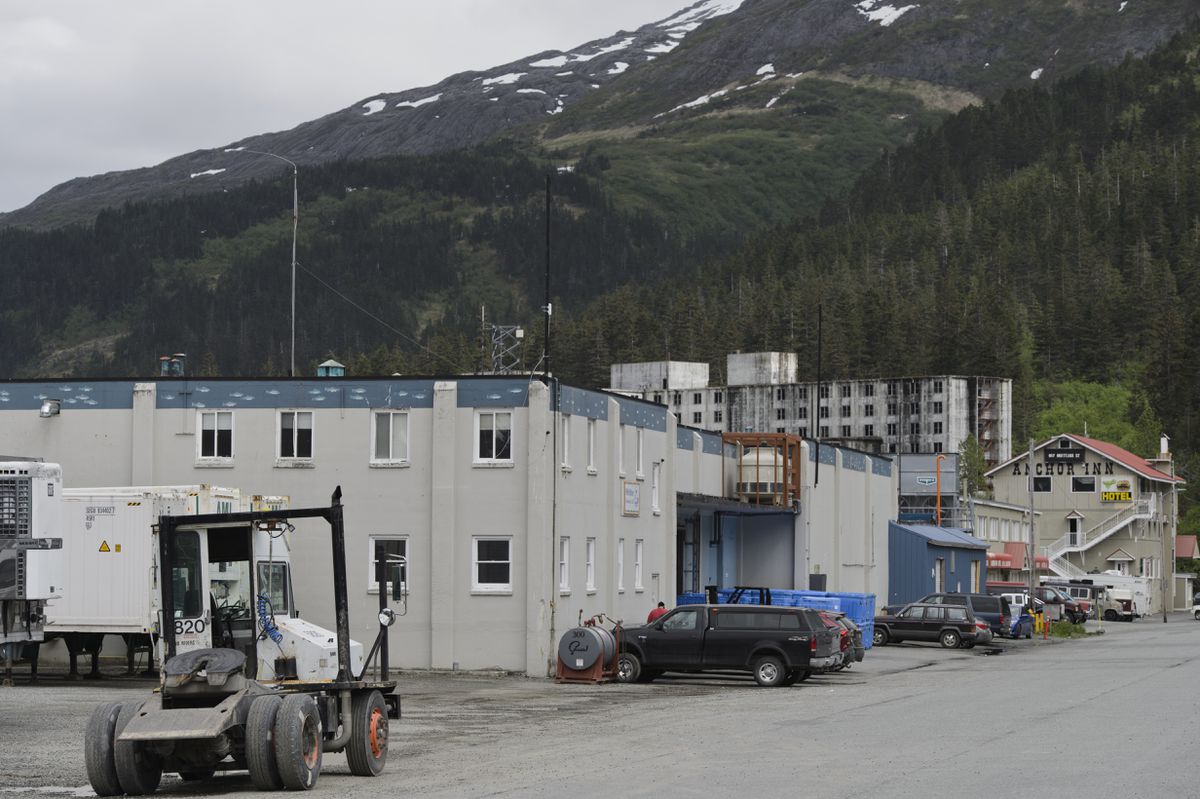 After 11 seafood processor workers tested positive for COVID-19 in the Prince William Sound community of Whittier, city and Alaska state officials expressed concern Thursday over the potential for more spread in a place where the majority of residents live in the same building.

All of the workers who tested positive have left Whittier and their contacts were scheduled to leave the city Thursday evening, Cathy McCord of Whittier Seafood said during an emergency city council meeting Thursday. The workers slated to come into Whittier will also be tested in Anchorage, McCord said.

City council member Tom Wagner said that although the processor’s plans were good, he had heard and seen that workers weren’t complying with quarantine rules.

McCord said the processor has done their best to keep groups of workers separated, but that she “couldn’t give you guarantees that they have not come in contact with other people, other local residents of Whittier.”

Reeves, on Facebook, wrote that “no locals worked side-by-side with anyone who tested positive."

The 14-story Begich Towers is home to about 80% of Whittier’s 280 year-round residents, while almost everyone else lives in the Whittier Manor condo building. The city on the western side of Prince William Sound is isolated from the rest of Alaska, separated by a 2.7-mile-long tunnel from a road leading to the Seward Highway. In the summer, about 400 to 500 more people connected to the fishing industry are in Whittier, Hunt said.

[Previous reporting: In Whittier, where almost everyone lives under the same roof, the pandemic threat feels different]

Seasonal Whittier Seafood workers are not allowed to go into local businesses or leave Whittier for the entire season, McCord said. As a result, some of them chose to leave through company-purchased flights, but there had “been people that have just left, have no idea where they went," McCord said.

The state’s chief medical officer, Dr. Anne Zink, who attended the meeting remotely, said she was concerned about the potential for someone to be “moving throughout” the community after disappearing from the job when she didn’t know what their interactions with others may have been like. She said Whittier should have “a very low threshold” for testing and screening going forward.

The state’s epidemiologist, Dr. Joe McLaughlin, noted that such information was new and said they would need to follow up to figure out who the two Whittier residents are and better understand what those interactions may involve.

Zink urged people in Whittier to wear masks, socially distance and to do “everything we can do to prevent further spread within Whittier because I am concerned that we’re going to see more cases.”

On Thursday, the state’s health department published data showing that 17 nonresident seafood industry workers had newly tested positive for COVID-19, plus another nonresident in an undisclosed industry in the City and Borough of Sitka.

Ten of those cases involve the Whittier workers. Another two seafood workers tested positive in the Kenai Peninsula Borough, three in the Aleutians West Census Area, one in Anchorage and one in the Kodiak Island Borough.

A total of 41 people from out of state have tested positive in Alaska.

The state also reported Thursday that eight more Alaskans tested positive, bringing the total number of state residents who have tested positive for COVID-19 to 513. Four residents of Anchorage, three in Anchor Point, one in Homer, one in Soldotna and one in Big Lake were among the new cases.

After several weeks with few or no new cases reported each day, Alaska has seen higher case counts recently, including its highest-ever daily increase on Sunday that included 27 new cases.

Ten Alaskans with the coronavirus have died, and there are currently 127 active cases of the illness statewide.

During the emergency city council meeting Thursday in Whittier, McLaughlin, the state’s epidemiologist, listed several factors that contribute to an acceleration of COVID-19 spread: travel from a place with many cases to a place with low cases, group gatherings, people living in close quarters and asymptomatic transmission.

“All four of those are present in a facility like Whittier Seafoods," McLaughlin said.

Among the workers who tested positive, McLaughlin said, half of the group showed mild symptoms and the other half showed none.

Additionally, Begich Towers is also somewhat similar to a congregate living setting, meaning that one of those major factors in rapid virus spread “is in play at Begich Towers,” he said.

But McLaughlin added that people travel between Whittier and places like Anchorage, where the virus has been spread through the community, and the virus could already be in Whittier but so far undetected.

McCord of Whittier Seafood became emotional toward the end of the meeting, and said she wouldn’t be surprised if she didn’t have a job by the end of it.

“I live here. I knew the risks. But I also have a job to do and I’ve tried to do it to the best of my ability," she said.

“We have tried to do the best that we can with the employees that we have," McCord said. “... But when they refuse to do what we ask, my hands are tied.”

The workers who tested positive are from Mexico, said Donna Bean, a state public health nurse who traveled to Whittier to interview the workers and their contacts. Officials discussed ways to discourage the stigmatization of Whittier Seafood workers. Council member Victor Shen asked that everyone remember that “Whittier Seafood workers are people just like us," a sentiment echoed by others.

Peter Denmark, vice mayor, asked whether the city should “become more conservative in our presentation to the public,” specifically mentioning that Whittier’s emergency ordinance allows for raising COVID-19 alert levels if the city sees a rapid or consistent increase in cases. City attorney Holly Wells said such a move might involve a return to stricter pandemic-related restrictions for restaurants, bars and other businesses as well as intrastate travel, though it would also be “legally appropriate” to wait before determining what action to take.

Ultimately, the council agreed to meet again Monday — when it might decide on a course of action — and try to find a way to allow discussion from citizens.

Whittier community members can get tested for COVID-19 for free at the Whittier Clinic, and don’t need to show symptoms to be eligible for a test, the state health department said.

“We’ll try and support members of the community and Whittier Seafoods as best as we can from a city standpoint, but of course the city can only do so much,” Whittier Mayor Dave Dickason said Thursday afternoon. “We’ll do the best we can to protect our citizens.”

[Editor’s note: The state initially reported that 12 seafood workers in the Kenai Peninsula Borough had tested positive for COVID-19 but later clarified in a statement that 10 of those cases involved the Whittier workers, in the Valdez-Cordova Census Area.]