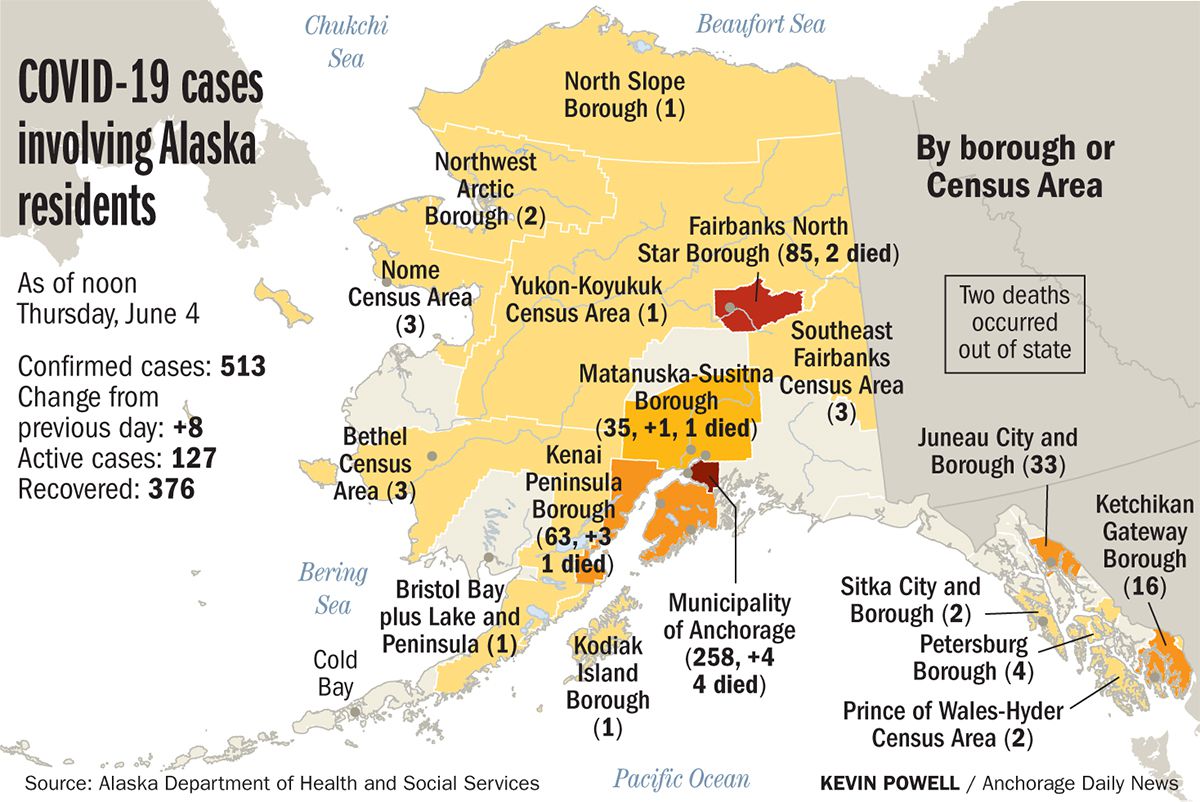 Update, 5 p.m. Thursday: Alaska’s health department clarified Thursday that 10 of the 12 seafood industry workers who were reported to test positive in the Kenai Peninsula Borough were actually working for Whittier Seafoods, in the Valdez-Cordova Census Area. On Thursday evening, the Whittier City Council held an emergency meeting to discuss the cases and potential next steps to prevent the spread of COVID-19. Read the latest updates on this story here.

Eighteen nonresident workers in the state and eight more Alaskans tested positive for COVID-19, according to new numbers published by the state’s health department on Thursday, continuing a recent rise in daily cases.

The updated numbers show that 12 seafood industry workers in the Kenai Peninsula Borough tested positive for COVID-19 on Wednesday, as did three seafood workers in the Aleutians West Census Area, one in Anchorage and one in the Kodiak Island Borough.

Additionally, a worker from an unlisted industry in the City and Borough of Sitka is among the new nonresident cases announced Thursday.

So far, 41 people from out of state have tested positive for COVID-19 in Alaska, including 32 seafood industry workers.

On Wednesday evening, the Unalaska Unified Command announced that two Icicle Seafoods workers tested positive for COVID-19. The two workers received negative COVID-19 test results before coming to Unalaska from Seattle a week ago and had been in quarantine, but were moved into isolation after the positive results.

Eight Alaskans also tested positive for the illness on Wednesday (case counts published on Thursday reflect test results that the state receives on the previous day). Four residents of Anchorage, three in Anchor Point, one in Homer, one in Soldotna and one in Big Lake were among the new cases.

After several weeks with few or no new cases reported each day, Alaska has seen higher case counts recently, including its highest-ever daily increase on Sunday that included 27 new cases.

A portion of those cases included residents and caregivers at the Providence Transitional Care Center in Anchorage. As of Wednesday, the facility had 25 positive cases, and Providence was continuing to receive test results, according to a post on the facility’s website.

Since March, 513 Alaskans have tested positive for COVID-19, and there are currently 127 active cases of the illness statewide. Ten Alaskans with the virus have died.