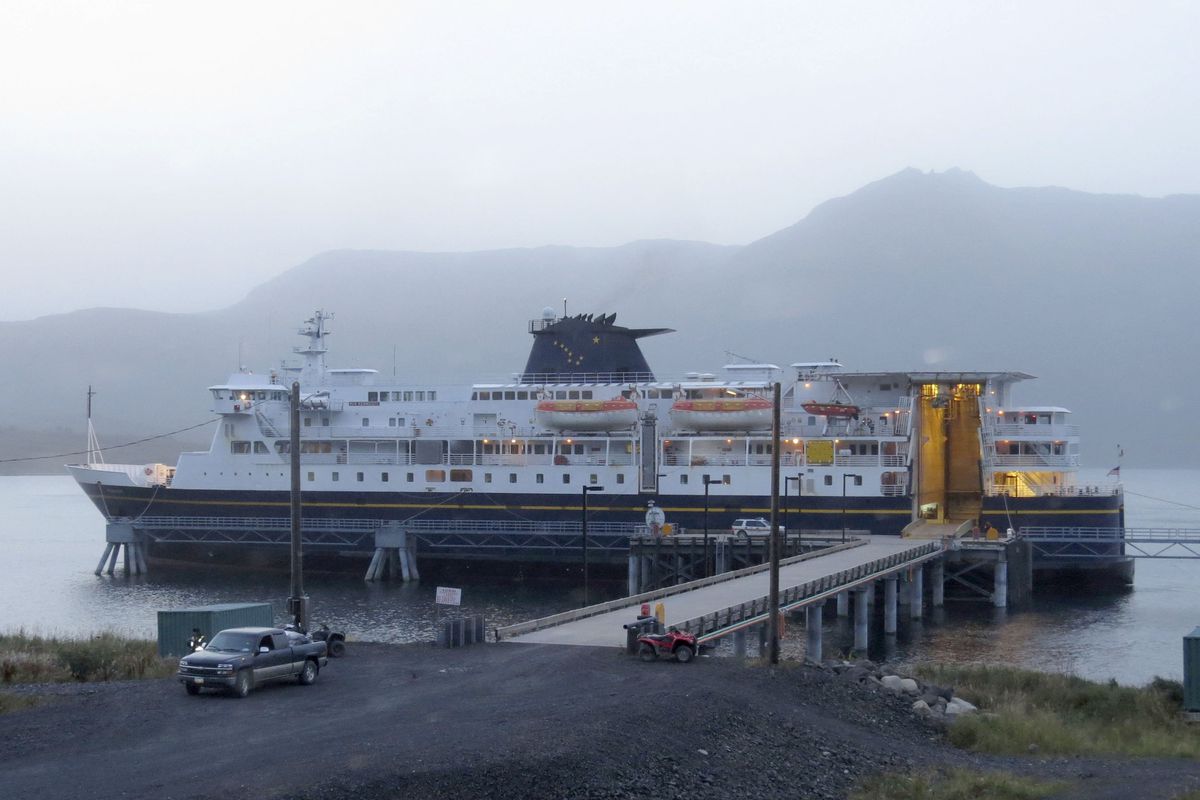 The M/V Kennicott is docked at Old Harbor. (Photo by Geraldine Young / Alaska Department of Transportation)

The M/V Kennicott is docked at Old Harbor. (Photo by Geraldine Young / Alaska Department of Transportation)

The first passenger on an Alaska state ferry with a confirmed positive coronavirus test boarded in Washington state in late June with a negative test result at the time.

The person tested positive for the virus eight days later after arriving in Cordova.

State transportation officials said the case demonstrates the need for passengers and crew to follow protocols to safeguard against the spread of the virus even after they take a test, as required for longer ferry trips.

The passenger, whose age and sex are not being released, boarded the ferry Kennicott in Bellingham on June 27, according to Meadow Bailey, spokeswoman for the Alaska Department of Transportation and Public Facilities.

The person’s only close contact on the vessel was a traveling companion who later tested negative for the virus, Bailey said.

The announcement comes amid spiking COVID-19 case numbers in Alaska, with outbreaks occurring across the state.

The passenger and traveling companion had private sleeping quarters and, when they were outside their cabin, wore face coverings and kept 6 feet from others, according to a statement transportation officials issued late Sunday. Both the passenger and companion are isolated and not having contact with anyone else.

The infected passenger arrived in Whittier on July 1, then got back on the ferry July 3 for the trip to Cordova, Bailey said. The person tested positive for COVID-19 on July 4 in Cordova.

The Alaska Department of Health and Social Services “conducted extensive contact tracing” and determined the passenger’s only close contact was their companion, agency spokesman Clinton Bennett said in an email. The state found no other close contacts in Whittier, Cordova or anywhere in Alaska.

Medical officials in Cordova, where the passenger was tested, said in a statement Monday they were “confident there was no engagement in the Cordova community by the infected individual” and that the exposure was contained.

The infected passenger had very mild “allergy-like” symptoms that they did not attribute to COVID-19, officials said.

But they followed the ferry protocols for face covers and social distancing anyway, Bailey said.

“All of those things are also really important because testing is not foolproof,” she said.

People who feel healthy can be contagious without knowing it, health officials say, potentially threatening others who are more vulnerable to the virus.

The Alaska Marine Highway System that operates the ferries last month implemented strict new policies in response to the pandemic including requiring tests within 72 hours of departing on longer trips and face covering and social distancing on board.

It was the Kennicott’s first sailing to Whittier of the season, and the first ferry into Cordova since last fall.

The vessel normally carries about 500 people. But, like the state’s other ferries, the Kennicott is operating with sharply reduced capacity to allow passengers to spread out during travel.

The ferry Tustumena, which experienced a coronavirus outbreak among crew members on its first trip of the season from Homer to Unalaska, was just returned to service last week. It’s carrying 60 passengers but has a capacity for 160.

The Kennicott carried 125 passengers -- a quarter of its capacity.

[For high-risk Alaskans navigating the pandemic, there’s no return to normal life in sight]

“This is something that we anticipated would probably happen considering how prevalent COVID is in all of our communities which is why we have these protocols in place,” Bailey said. “We wish it wasn’t so early in the season when we were seeing this.”

The state is recommending anyone who traveled on the Kennicott wear a face covering in public; maintain at least a 6-foot distance from non-household members; avoid crowded places; monitor for symptoms and get tested for COVID-19 if any arise.