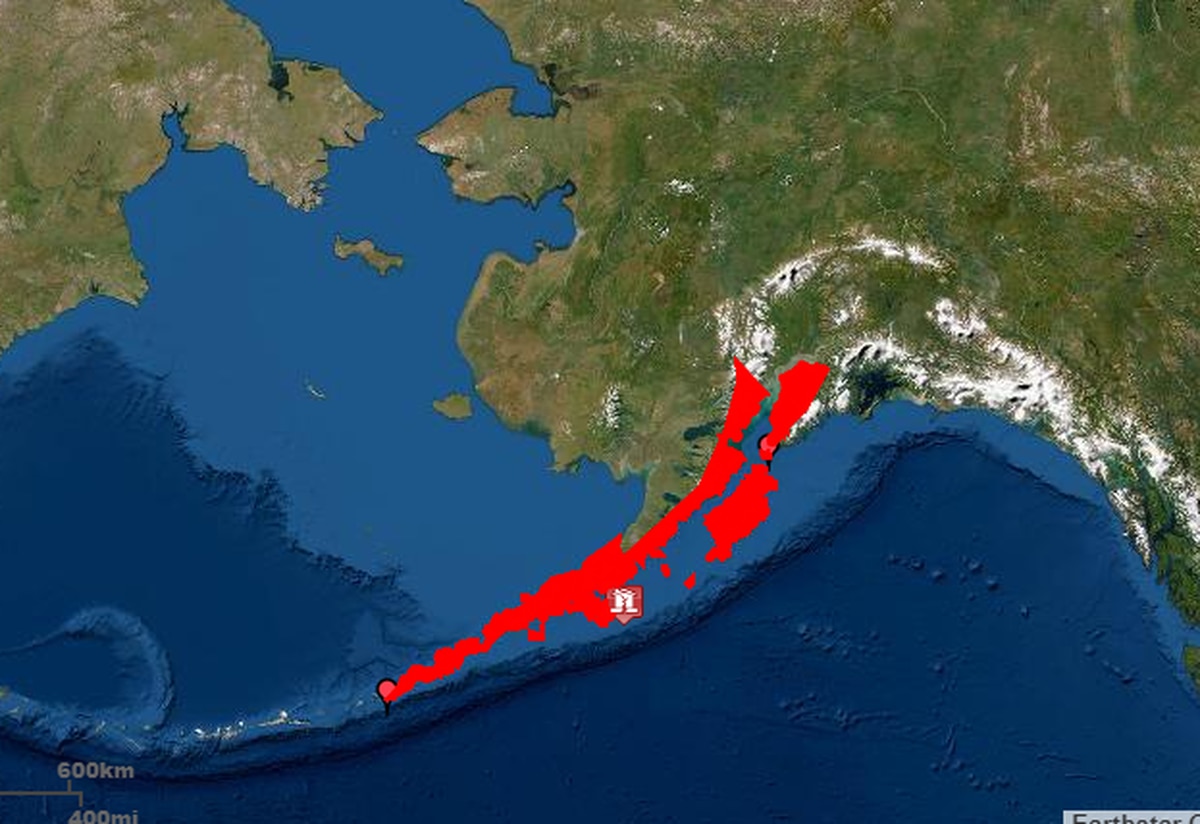 A map on the U.S. Tsunami Warning System website shows tsunami warning areas in red. An earthquake on Tuesday night, July 21, 2020, prompted a tsunami warning across a stretch of coastal Alaska. By 12:30 a.m. Wednesday, the warning had been canceled. (Screengrab from tsunami.gov)

A map on the U.S. Tsunami Warning System website shows tsunami warning areas in red. An earthquake on Tuesday night, July 21, 2020, prompted a tsunami warning across a stretch of coastal Alaska. By 12:30 a.m. Wednesday, the warning had been canceled. (Screengrab from tsunami.gov)

A tsunami warning across a large swath of coastal Alaska triggered by a magnitude 7.8 earthquake off the Alaska Peninsula on Tuesday night was canceled by 12:30 a.m. Wednesday after the officials determined the tsunami was no longer a threat.

The tsunami warning originally stretched from the Alaska Peninsula to Kodiak Island and the western Kenai Peninsula, sending Alaskans scrambling to higher ground in communities such as Kodiak, Sand Point, Unalaska and Homer.

Though some people in Anchorage received tsunami warning alerts, the Anchorage area was not at risk, said Louise Fode, warning coordination meteorologist with the National Weather Service.

In its notice of the tsunami warning cancellation, the National Tsunami Warning Center said that “a tsunami was generated by this event, but no longer poses a threat. Some areas may continue to see small sea level changes.”

The center also urged people not to return to hazard zones until local officials say it is safe to do so.

James Gridley, director of the National Tsunami Warning Center in Palmer, said in an interview early Wednesday that “our procedures put us into a warning even if we haven’t measured a tsunami wave — we imply that there is until we know better.”

The earthquake occurred at 10:12 p.m. Tuesday about 75 miles south of Chignik at a depth of about 17 miles, and was reportedly felt as far away as Anchorage, according to the U.S. Geological Survey.

“This is a very significant earthquake in size,” said Michael West, state seismologist with the Alaska Earthquake Center.

The Tuesday night earthquake was “something like 15 times more energy than was released in the 2018 Anchorage earthquake,” he said. But since it happened offshore, there was much less shaking recorded, and West said earthquake center officials weren’t expecting damage from shaking.

The kind of earthquake that occurred Tuesday evening was typical for the southern coast of Alaska, West said. It’s also the same style — “more or less,” West said — as the Great Alaska Earthquake of 1964.

“These are the style of earthquakes which can be very tsunami-producing,” West said.

“We’ve got a high school full of people. I’ve been passing out masks since the first siren sounded,” said Larry LeDoux, superintendent of the Kodiak School District. ”Everything’s as calm as can be. We’ve got probably 300, 400 people all wearing masks,” he said.

At the Kodiak Police Department, where local officials had set up an emergency operations center, officer Francis de la Fuente said they had not seen a wave by 12:15 a.m. “We’re just waiting for the tsunami warning center,” he said.

At Kodiak High School, LeDoux said the sirens and evacuations were nothing out of the ordinary for someone who grew up in Kodiak.

”I’ve been doing these since I was a little kid,” he said. “Old news.”

In the first minutes of a seismic event, there aren’t usually enough ocean sensors to measure a tsunami wave, said Gridley with the National Tsunami Warning Center. You have to give it time to get to nearby sensors, he said, but if there’s a wave, beaches and shorelines could be impacted before then.

“We have to assume the worst case scenario,” Gridley said. “The safest position is to get people moving.” It’s not like a hurricane that forms out in the ocean, days away from shore, he said — they have to go straight to a warning.

On Tuesday, the center issued its tsunami warning and kept the warning in place after seeing a 25-centimeter wave in Sand Point. Center officials knew the tsunami wouldn’t be huge, Gridley said, but they had to be certain and wait for the entire wave cycle.

“If we just start seeing a little bump, we don’t know if that bump is going to get much bigger, or if that was it,” Gridley said. After about an hour and a half Tuesday, the tsunami advisories for certain areas outside of the warning zones were canceled, Gridley said.

“We just had to wait long enough to see whether or not we would see more of a wave develop or not,” Gridley said. “And the answer was no.”

The center canceled the tsunami warning, which grew to stretch from the Aleutian Islands to the Western Kenai, a little under two hours after it issued its initial warning.

”We were in a (city) council meeting and started feeling it rocking, and by the time I got home from the council meeting then the warnings were going and had to turn back around,” Reinders said.

”This is a developing situation, and we are monitoring closely the information that is coming from the state and federal agencies that we’re collaborating with,” Ahlberg said before the tsunami warning was canceled. “So at this juncture, I’m not putting a time stamp on it.”

According to Homer Deputy City Clerk and Deputy Public Information Officer Rachel Tussey, Homer residents were told to evacuate areas below 50 feet, and the city stood up an emergency operations center at the Homer Volunteer Fire Department. Tussey said the Homer High School was set up as an assembly point and emergency shelter.

In Sand Point, people in low-lying neighborhoods evacuated to the school. There they waited for a predicted first wave to hit around 11:15 p.m., said Jordan Keeler, the Anchorage-based city administrator.

“The first wave didn’t materialize, which is a great thing,” said Keeler, who had been in close contact with public safety staff in Sand Point since the earthquake.

The earthquake was felt in Sand Point, but there were no reports of major structural damage, Keeler said. A commercial fishing opener starting at 6 a.m. Wednesday means much of the substantial Sand Point fishing fleet has left the harbor for the fishing grounds, Keeler said.

As of 11:45 p.m. people remained gathered at the school “in kind of a holding pattern” waiting for aftershocks or “God forbid, any other water level changes,” he said. Sand Point issued an all-clear by 12:30 a.m.

The National Tsunami Warning Center on Tuesday night described a variety of potential impacts from a tsunami that could stretch hours or days after the first wave arrives, including: repeated flooding in coastal areas; debris-filled water that could injure people or weaken structures; and unusual current and wave activity that could affect coasts facing in different directions.

“A rapidly receding or receded shoreline, unusual waves and sounds, and strong currents are signs of a tsunami,” the center said. “The tsunami may appear as water moving rapidly out to sea, a gentle rising tide like flood with no breaking wave, as a series of breaking waves, or a frothy wall of water.”