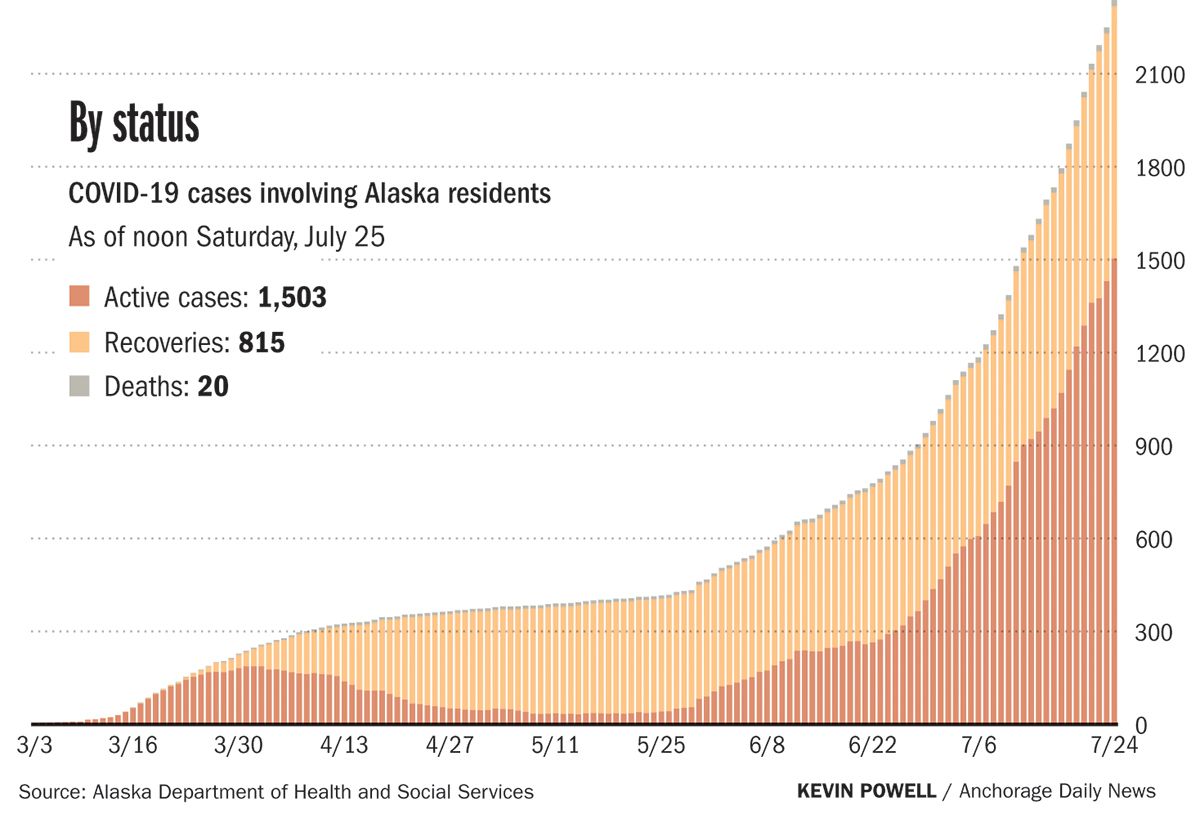 Alaska reported a new death tied to COVID-19 and 115 new virus cases among residents and nonresidents on Saturday, extending a surge in cases that has ramped up dramatically in the past several weeks.

The new cases come amid major outbreaks in the seafood industry, including an OBI Seafoods processing plant in Seward where 98 employees tested positive, a American Seafoods factory trawler with 85 confirmed cases, an Alaska Glacier Seafoods plant in Juneau with 40 cases and, most recently, a Copper River Seafoods plant in Anchorage with 56 cases of the illness, announced Friday night.

By Saturday, state data showed that there were 1,901 active cases of COVID-19 among both residents and nonresidents while 947 people had recovered.

The new death reported Saturday involved a Fairbanks man in his 70s who had pre-existing conditions, according to an online statement from the state’s health department. The total number of Alaskans whose deaths were associated with COVID-19 is now 20.

New cases reported Saturday involve 88 residents, including 48 in Anchorage and one in Eagle River. There were six cases in Wasilla and four in Palmer.

In the Kenai Peninsula Borough, three people from Soldotna and two people from Seward tested positive. There was also one case each in a person from Sterling, Kenai and a smaller community in the northern part of the peninsula.

Five Fairbanks residents tested positive as did one person from North Pole.

Two people from Cordova and one person in Valdez, whose actual residence is Kenai, tested positive as well as one person from a smaller community in the Valdez-Cordova Census Area, according to the state.

The state also reported three cases in smaller communities in the Northwest Arctic Borough and one case in Kotzebue. There were also three new cases in the Yukon-Koyukuk Census Area.

There was one case each among residents of Juneau, Haines and Unalaska.

Of the 27 nonresident cases reported Saturday, 22 are seafood industry workers in Seward, one is in Kenai and four were classified as unknown.

The state’s average testing positivity rate for the last three days is 2.12%, according to the state health department.